How big tech can anticipate its responsibilities

“The Circle” is a powerful albeit dystopian novel by the American writer Dave Eggers, about an eponymous fictional Internet company. Think Google, Apple, LinkedIn and more rolled into one. The novel follows the central character Mae Holland as she lands her dream job at The Circle and swiftly rises through its ranks. As she does so, the reader is introduced to a range of sophisticated technologies that The Circle has developed including SeeChange: light, portable cameras that can provide real-time video with minimal efforts. Eventually, SeeChange cameras are worn all day long by politicians wishing to be ‘transparent’, allowing the public to see what they are seeing and doing at all times. When I first read The Circle when it came out in 2013, it felt to me like a Brave New World or 1984 for the 21st Century. The book was made into a movie with Tom Hanks and Emma Watson earlier this year. Although the movie was panned by the critics, I still strongly recommend the original Eggers book. It raises fascinating and important issues about what responsibilities Big Tech companies like the fictional The Circle have for the impacts of their products and services – and who gets to decide whether specific products are in society’s interest – or not?

I was reminded of The Circle by the announcement last week that Deep Mind – the British Artificial Intelligence company that was acquired by Google in 2014 for more than $500million, has established a new research unit, DeepMind Ethics & Society, to complement its work in AI science and application. This new unit will “help us explore and understand the real-world impacts of AI. It has a dual aim: to help technologists put ethics into practice, and to help society anticipate and direct the impact of AI so that it works for the benefit of all.” (Why we launched DeepMind Ethics & Society: https://deepmind.com/blog/why-we-launched-deepmind-ethics-society/ )

As the company explains in a blog accompanying the announcement:

“We believe AI can be of extraordinary benefit to the world, but only if held to the highest ethical standards. Technology is not value neutral, and technologists must take responsibility for the ethical and social impact of their work.”

The new unit, DeepMind Ethics & Society, has already hired six researchers with backgrounds in areas such as philosophy, ethics and law, and hopes to expand it to a team of 25 in 2018. Apart from the full-time staff that DeepMind itself will employ, the unit will also be overseen by six “fellows,”  independent researchers including Jeff Sachs, the director of Columbia University’s Earth Institute, Nick Bostrom, an Oxford university philosopher and economist Diane Coyle, who will function as a kind of academic peer review board.

Humankind is making amazing advances in many areas of technology which create exciting possibilities for enhancing the quality of our lives and advancing sustainable development. Unsurprisingly, as the former Cranfield Institute of Technology, Cranfield University is involved in many of these new technologies.

It is crucial, however, that in parallel, society considers the ethical implications of these advances. Thomas Friedman, the Op-Ed writer on The New York Times and author of numerous best-sellers such as The World is Flat and Hot, Flat and Crowded, was widely derided by techies for the graph below from his most recent book Thank you for being late: An Optimist’s Guide to Thriving in the Age of Accelerations. (2016) 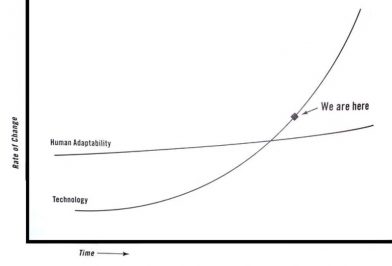 Thomas Friedman’s Thank You For Being Late (2016)

On this one, I am with Friedman: there is a very real danger of technology out-pacing humankind’s capacity to process and evaluate the ethics and impacts of the technology. And that can produce popular backlashes. Whatever you may feel about GMO: Genetically Modified Organisms, the failure of Monsanto and the other big Agri-businesses in the mid-1990s to engage seriously with popular and media concerns about GMOs, led to the scares of “Frankenstein foods” and set back the GMO cause in Europe already for two decades.

It is, therefore, in the interests of businesses at the forefront of new technologies to be fully engaged in popular debates about the ethics and the implications of what they are working on.  Transparency is not an optional extra – it is a vital prerequisite for a license to operate, let alone for commercial sustainability.

DeepMind, therefore, is well-advised to try to mitigate the risks of popular, media and ultimately regulatory backlash against AI.

Already the DeepMind announcement of its Ethics & Society Research Unit has drawn criticism for lack of transparency (see, for example, “DeepMind now has an AI ethics research unit. We have a few questions for it…Tech Crunch Oct 4, 2017 by Natasha Lomas:

At this stage, I would be more cautiously positive, welcoming an initiative to try and create appropriate mechanisms for dealing with the big ethical questions surrounding AI and other major technology breakthroughs. The test, of course, will be whether DeepMind in the future will accept the advice of its new Unit and be willing to abandon lucrative commercial opportunities if advised to do so on ethical grounds. And crucially whether they will tell us if they have done so.

Next Post
Submarine hunter by day, PhD student by night

David is a social entrepreneur and campaigner for responsible business, diversity, and small business development. He speaks, writes and advises regularly on business, society, entrepreneurialism, and future trends for businesses, media and business schools around the world. He has worked with many, leading global businesses including BP, Shell, Microsoft and Diageo. He has worked with international institutions such as the OECD, the European Union, and the World Bank. He is a regular key-note speaker for business conferences internationally. He is a regular contributor to, columnist and editorial advisory board member for the Guardian Sustainable Business Blog and The Ethical Corporation (www.ethicalcorp.com). He sits on the Corporate Responsibility stakeholder advisory group for Camelot. His books include: "Everybody's Business" (2001) and "Corporate Social Opportunity: Seven Steps to make Corporate Social Responsibility work for your business" (2004) - both co-authored with Adrian Hodges; "Corporate Responsibility Coalitions: The Past, Present, and Future of Alliances for Sustainable Capitalism" co-authored with Jane Nelson, published by Greenleaf Publishing and Stanford University Press (2013); and "Social Intrapreneurism & all that Jazz (2014) co-authored with Melody McLaren and Heiko Spitzeck. He has also contributed to several other books including "The Accountable Corporation" and "What if?". David has an Honorary docorate of Laws from London South Bank University; and was a visiting senior fellow at the CSR Initiative of the Kennedy School of Government, Harvard University (2005-10), and variously a Visiting Fellow at several UK and American business schools.

At the time of writing, I’ve joined the Bettany Centre for Entrepreneurship as a new

One thought on “How big tech can anticipate its responsibilities”