Homepage / A panel that packs a punch

A panel that packs a punch 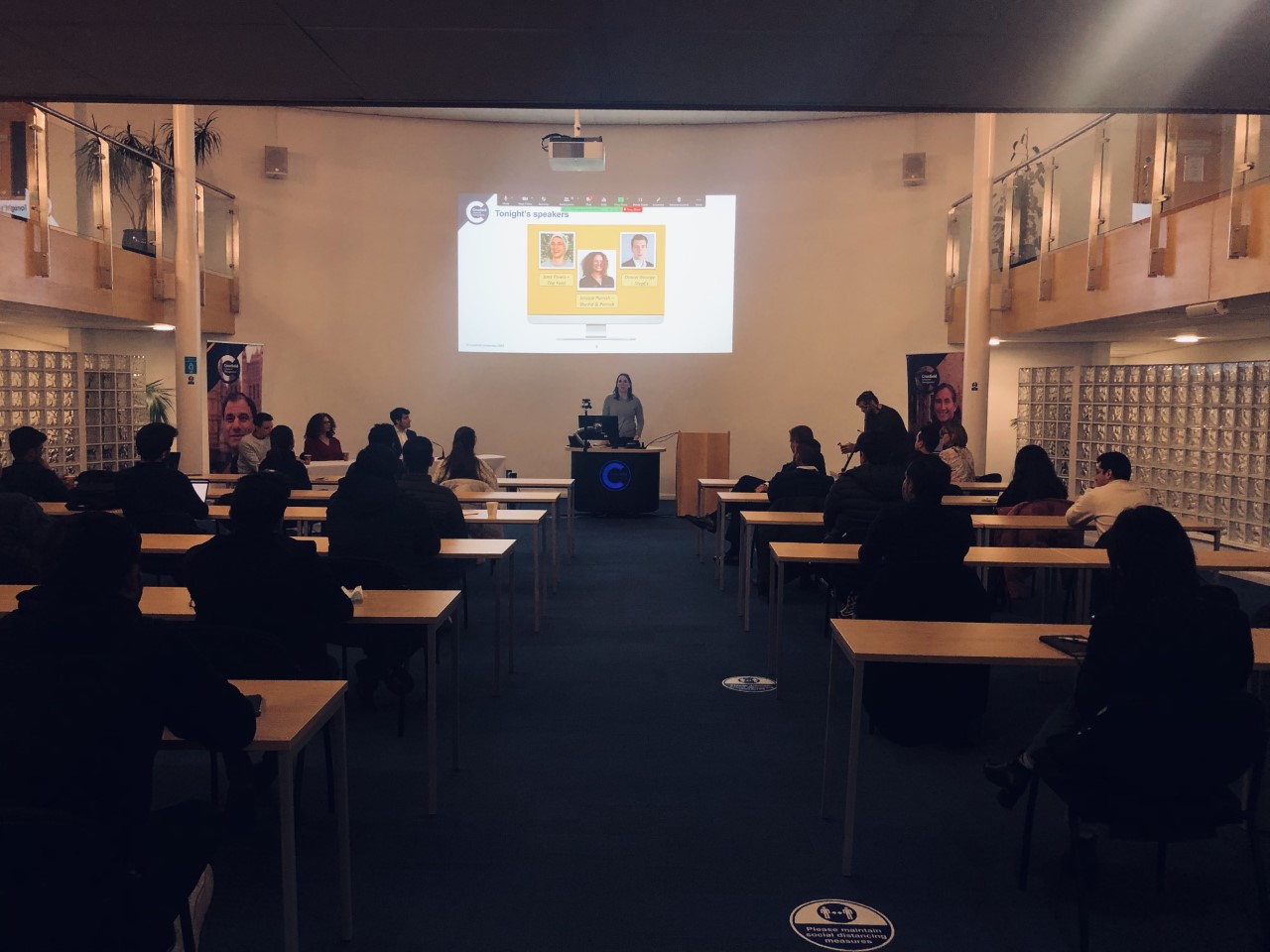 On Thursday 24 February we were thrilled to host a trio of Cranfield alumni, who were back on campus to share the stories of their entrepreneurial journeys with a live and virtual audience. This was the last in our spring series of speaker events, and our guest panel made it a fitting finale.

“In class at Cranfield, I turned to the person next to me, and said, ‘Why don’t they make products for us?” Jessica Parrish

Opening the evening’s line-up was Jessica Parrish [Exec MBA 2016]. Sixty-five percent of the UK population has curly or textured hair, and their needs are woefully underserved. Jessica is determined to change all that. In 2020 she launched Shedid & Parrish, a range of salon hair products that are 100% natural, vegan, and sustainably packaged. Moreover, Shedid & Parrish products are cruelty and scent free. Jessica’s belief in her idea was so powerful that she abandoned a highly successful career in the hospitality industry to devote herself full-time to her start-up. Prior to launching, she invested huge amounts of time in researching and understanding a busy and complex market where big players like L’Oréal dominate. Initially, she had thought about setting up her own hair salon but came to see that the real opportunity was in formulating her own range of branded products, exclusively for salons. She laid the groundwork carefully, building strategic partnerships in the industry. In 2020 she established her credibility and brand awareness by winning a string of high-profile awards. The year after, in February 2021 she launched, and this year is the one in which she will really start to sell. Already the results have outstripped her expectations. Her advice to other budding entrepreneurs?

– Don’t get distracted, especially by other people who are doing well. Stay focused and hold on to your vision.

– Your network and your friends are everything. They will see you through good times and bad.

– Have your elevator pitch clear in your head. Be prepared to talk about your business at every opportunity!

Our next speaker, Joey Powis [FT MBA 2016] is the co-founder of The Font, an urban indoor climbing concept, which combines a climbing wall, specialist training facilities, and space to relax and eat and drink. After a number of years in management consulting, Joey spent a year at Cranfield taking stock of his career, convinced that his future lay in engaging with something that was smaller-scale and with greater personal meaning. Its heritage in innovation and entrepreneurship is what attracted Joey to the Cranfield programme. When he went back into employment he knew that it was just a matter of waiting for the right opportunity. Initially, he worked for a scale-up engineering firm which gave him valuable small business experience, before moving into private equity, which enabled him to understand the investor’s perspective.

He had always been a keen climber and endurance sports enthusiast. Joey and his co-founder Rich, a partner at Bain Capital, were both dissatisfied with the existing climbing venues available in London; none of them, they felt, got it quite right. Gradually a three-pronged proposition developed: the pair would create a space that combined a competition-standard climbing wall, physical training, and a space where the climbing community could connect over food and drink. In April 2021, Joey and Rich launched their first centre, an 11,000 square ft venue in Wandsworth, south London, staffed with expert coaches and promoted with the strapline: climb, train, connect. It has been a great success, not least because of the help and support from a key early investor, Tristram Mayhew, another Cranfield alumnus and co-founder of the leisure industry leader, Go Ape. As he finished his talk, Joey echoed Jessica’s advice: use your network for all its worth!

Our final speaker was Dan George [MBA 2013], founder of StepEx, who is on a mission to remove the price barrier to education, by enabling universities to offer their courses in exchange for a share of a student’s future earnings rather than just charging upfront fees. Dan began his working life as an economist for the Australian government. In this role, he was concerned with balancing environmental preservation with providing an adequate standard of living for Australian citizens. A scholarship from the Cranfield Australian Alumni Association enabled Dan to study in the UK, where he saw the ceiling on the professional opportunity of the less-affluent majority. Not everyone he had grown up with had enjoyed his own good luck.

Like Joey, Dan felt that additional experience would be needed before he was able to start out on his own. After Cranfield he worked for several years in the finance sector, to understand in depth the broad range of financial markets and mechanisms available. In early 2017 he launched StepEx, a novel concept in funding higher education. Essentially StepEx provides the digital plumbing for education providers, from universities to IT bootcamps, to offer their courses for a share of future earnings. Enabling students to invest some of their future potential into their careers now. Alongside this, StepEx also provides the infrastructure for asset managers to co-invest alongside the education providers. StepEx is the world’s first, regulated provider of “future earnings agreements”, or as Dan describes it, financial plumbing for the next generation.

Since its launch, StepEx has concluded numerous agreements with both funders and leading institutions, such as Cranfield, INSEAD, London Business School, and the University of Cambridge.

So, three very different business founders in very different sectors, but with one thing – apart from the Cranfield experience – very much in common. They all have drawn inspiration and insight from their personal experiences as consumers, to spot opportunities to launch and build their own ventures.

To find out more about The Font, visit: https://www.the-font.co.uk/

To learn more about the opportunities offered by StepEx, visit: https://www.stepex.co/