Homepage / My journey to COP26 in Glasgow

My journey to COP26 in Glasgow 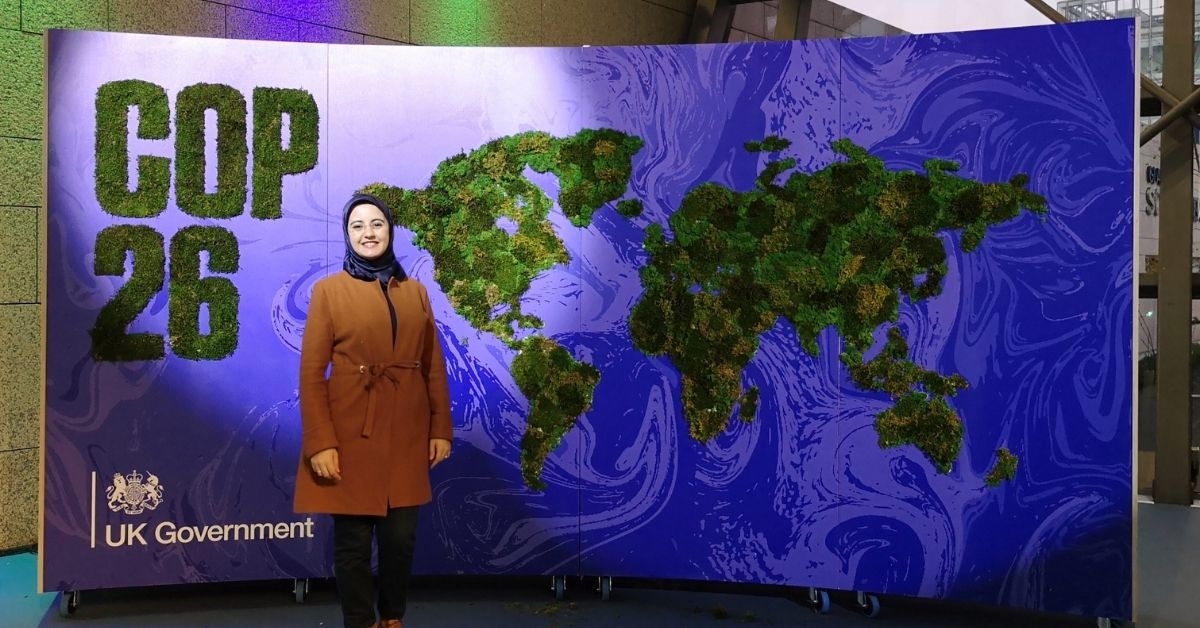 I was lucky enough to spend 3 days at COP26 hosted in the Glasgow Science Centre. Even though my PhD research isn’t directly related to climate change, I have always been interested in the subject as anyone should be. Climate change is now a serious issue impacting the environment, humans and all species. I was involved in the organisation and the co-hosting of the Cranfield Doctoral Network Conference “Road to COP26”. In this 2-day conference, students and staff as well as external speakers shared their research and thoughts to tackle the problem by presenting solutions and ideas for a better future. It was an amazing event where we had interesting discussions and debates. Following this, I was so excited to attend the COP26 in Glasgow on the 5-6-7th of November 2021 to learn more about the problems we face, and what we can do about them. The event was divided into a blue zone and a green zone. Only the green zone was accessible by the public. My journey to the event is described as follows: 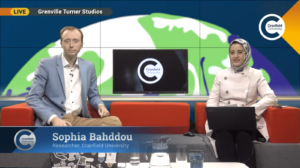 I attended several events in the green zone, from seminars to artistic shows. One of them was about visions of tomorrow for a sustainable future, with the presence of Màiri McAllan, Minister for Environment and Land Reform who joined the session to discuss the importance of supporting collaborations between Scotland and Malawi young leaders. The next event I attended was a dramatic presentation by four young climate activists, called “I stand for what I stand on”. It shared the young international cast’s thoughts and fears about the climate emergency and explored the reality of being a teenager and growing up in the shadow of the climate crisis.

The evening session was dedicated to showcasing films made by young people around the world, telling their own stories of both struggle and hope in the face of climate change, organized by Youth4planet and collaborators.

My favourite event of the day was an artistic piece “I don’t care” written and directed by Adeola Yemitan and played by young people from the National Youth Theatre where they demonstrated eco-anxiety and eco-anger in the face of climate uncertainty. Unlike other shows, this one wasn’t about a normal narrative on climate change. It was different, as it reflected the reality of people’s thoughts and feelings that can’t be heard out loud. This includes the jokes people make about climate change, and the “I don’t care” thought when it comes to climate crisis. All these attitudes are very present in the real life where individuals don’t express interest in what is happening “there” i.e. other parts of the world. The point of the show is to make the audience feel uncomfortable about these careless thoughts, hence feel uncomfortable about our own thoughts! The play was then concluded by motivational spoken words, emphasizing the urge to care and to make a change. 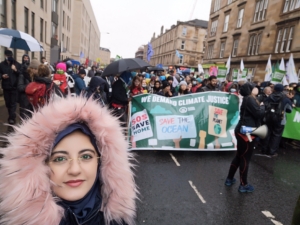 I had the chance to take part in the biggest protest during the COP26 where thousands of activists marched in Glasgow. This “Global Day of Action for Climate Justice” march marked the halfway point of the conference. It started at Kelvingrove Park in the west of the city and made its way to Glasgow Green. I saw many different groups and communities from all over the world raising their voices to demand decisive action by leaders against climate crisis. I was amazed by the energy activists had, from children to old people, men and women, despite windy weather and heavy rain. Some blocs were shouting, others singing and dancing, all with inspiring banners and colourful 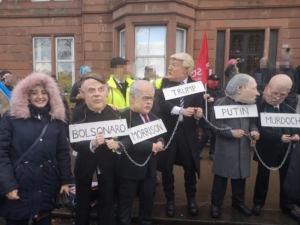 signs expressing their anger and frustration. They were all there for the same purpose and with a common concern although they spoke different languages and came from different backgrounds. I joined a group of young people who used music to make their voices heard in a fun way, repeating “What do we want? Climate justice! When do we want it? Now!”. Most protesters want countries to stop the use of fossil fuels and to accelerate action to repair the climate damage that is already felt in every part of the planet. I believe climate action should not be separated from social justice. It is unfair when developing countries are also suffering from the consequences of the climate change in spite of being the least responsible for emissions generation. 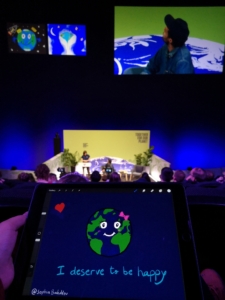 In the last day, I attended the screening of the Apple Original film “Here We Are: Notes for Living on Planet Earth” by the artist and author Oliver Jeffers who interacted with the audience and invited us to create a drawing using a provided IPad, illustrating a positive message related to Earth.

I then attended the ‘State of the Earth’ Question Time event chaired by Born Free Policy Advisor and Wildlife Advocate. Speakers include Businesswoman and investor, Environment Editor, CEOs, OBE and Executive president of different organisations, along with two other younger speakers. The discussion included many issues, but the key focus was the importance of habitat, wildlife protection and animal welfare at home and abroad in a rapidly changing world where we face a growing climate emergency.

I didn’t miss the chance to visit some of the exhibitions presented by different organisations. They shared their experiences and innovations to fight against climate change, using a range of accessories, decorations and visual demonstrations. I was very impressed by the spinning globe used by IBERDROLA and the Space4Climate that enabled the visualisation of different parameters and information over time and space. Parameters like carbon dioxide and methane emissions in Earth’s atmosphere, temperature and rainfall changes, human population, and many other variables related to biomass, wildfires, climate finance, green energy, adaptation and resilience, etc.

Before leaving the green zone, I attended the last event of the day where the Scottish Youth Film Foundation (SYFF), in partnership with ScottishPower, presented the finalists of the 2021 film competition for young Scottish filmmakers on the theme of ‘Change’. I was fascinated by the quality of those films and the messages behind them. Very talented people!

My 3-day journey was fantastic although intense, I learnt many things, and I enjoyed all the shows and exhibitions I saw. As I was returning from Glasgow, I was thinking of the day that marked me the most. It was the day of the march, as it was a new experience for me. Before the march, I was thinking, like many other people, that nothing will be achieved and that COP26 will be like the other COPs. Nevertheless, children and young people are giving me a lot of hope, seeing all that enthusiasm in them, especially after the motivational speech of Vanessa Nakate, the Ugandan activist who told protesters “Leaders rarely have the courage to lead. It takes citizens, people like you and me, to rise up and demand action. And when we do that in great enough numbers, our leaders will move”. From all the people that I randomly had small conversations with during the march, the one that touched me the most was an old lady who told me that she doesn’t worry about herself as much as she is concerned about her descendants’ future.