Homepage / James Bidwell: Making Waves through the Power of Disruption

James Bidwell: Making Waves through the Power of Disruption

On Thursday 17 February, we were delighted to welcome the second guest in our 2022 Bettany Centre for Entrepreneurship Speakers Series, James Bidwell, who joined us remotely from Switzerland. His is a fascinating story – a compelling tale of entrepreneurial success which has brought together his passions for innovation and sustainability. Perhaps the most remarkable feature of James’s journey as a business founder and investor is that it did not start until his late 40s. As he told the audience, it’s never too late to start your career as an entrepreneur.

After graduating from Bristol University in 1987, James spent two decades in the corporate world, working in advertising and marketing and then as a CEO. He came to prominence when he was hired as Marketing Director by the London department store Selfridges. Within a short time, he had turned a staid and rather conventional shop into one of London’s coolest shopping destinations. From there, he was hired as CEO of Visit London, with a remit to publicise London’s Olympic Games and following that to set up the UK arm of a US fashion house. The last job was short-lived: James grew quickly disillusioned with the waste generated by this industry. He quit his position, convinced that there was a better way to do business, and determined to pursue it.

In 2014 he bought Springwise, the world’s leading aggregator and disseminator of innovations. The company constantly scans the world for original and disruptive ideas. Each day three of these are selected and showcased to subscribers, and today Springwise has around 11,000 innovations on its database. They can come from anywhere. The key point is that they are ideas that are disruptive of business as usual, that they illustrate positive change and many of these feature as examples and case studies in his recent Amazon bestseller, Disrupt! 100 Lessons in Business Innovation or, as James describes it, “Springwise in a book”. 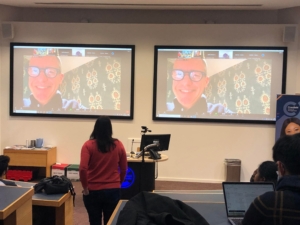 This idea of the power of disruption is the thread that connects Springwise to James’s two subsequent entrepreneurial forays: Re_Set and Capital D. Re_Set, James co-founded with his wife Sophie, in 2017 and is a strategy consultancy with a very clear purpose. Informed by the insights generated by Springwise, the consultancy works with clients to develop strategies for a disrupted world in which sustainability is the most pressing issue. In addition to innovation and sustainability, Re_Set helps clients with strategies that build on defining business purpose and culture, and address the challenges of digital transformation. Its most prominent clients to date are the Primark Cares strategy, work for the UKHO, part of the Ministry of Defence, and various infrastructure players such as Ports of Jersey and Grosvenor Estate. James and Sophie helped create Capital D as a leading pan-European PE house by becoming strategic partners in 2017. Its point of difference – D is for Disruption – is that it invests in ventures that are designed to disrupt their industries and capitalise on macro trends driven by the fast pace of change

In the two businesses James Chairs, he has put his money where his mouth his. Both Re_Set and Springwise are certified B corporations, having undergone a rigorous process to demonstrate that they are a force for good: indeed, the tagline of Re_Set is the creation of a Better Future. Today. The two firms also belong to 1% for the Planet, an organisation whose members commit to giving one percent of turnover to environmental causes.

While James is in a sense a serial entrepreneur, there are strong synergies between the three businesses he is involved in. He explained how they work together. Springwise performs the function of horizon-scanning, identifying promising innovative new firms across the globe. Re_Set helps to fit these ideas into the broader macro strategic framework, and Capital D mobilises the money needed to take these aspiring businesses to market. The work involved, however, should not be underestimated. As part of a regular “deep dive” process for Capital D, to source, say, around 50 candidate deals, Re_Set might start the process by reviewing 1,000 business ideas. In a crowded early-stage Private Equity funding sector, what sets Capital D apart is its focus on backing practical applications which have the capability to disrupt their target markets and grow both fast and profitably. Disruption can take place anywhere and James gave us examples of recent investments in the cosmetics, consumer survey, and recruitment industries.

In his view, the future is already upon us and James sees five key forces for disruption:

In spite of the complex challenges we all face, James remains an optimist. Many concerns and issues – like sustainability – have now been absorbed into the mainstream of political and corporate life. Not so long ago, making money and going green were seen as opposites. Today he believes there is a meeting point where it is viewed as acceptable, and indeed advantageous for a business to be responsible, sustainable, and profitable. In short, there has never been a better time for entrepreneurs to bring new, disruptive ideas to market.