Homepage / The story of our soapbox: women in science

The story of our soapbox: women in science 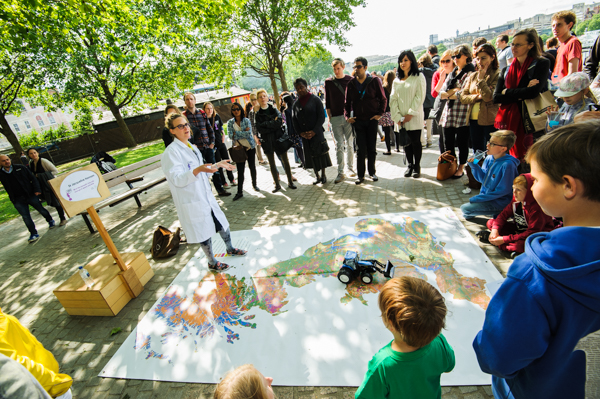 A dozen female scientists will take turns to climb on a soapbox in thecentre:mk in just over a fortnight (9 July) to share their research with members of the public going about their Saturday shopping. This is the first time Soapbox Science, a nationwide grassroots initiative promoting women in science, has come to Milton Keynes. The programme includes experts in planetary auroras, food production and psychology.

Why do we need a soapbox in a shopping centre to share science? Well, women still only make up 14% of the STEM (Science, Technology, Engineering, Mathematics) workforce in the UK.

As undergraduates, women often outnumber men but there are very few female professors. Typically, only 17% of professors are women (although there is variation between disciplines). This is known as the ‘leaky pipeline’ where women progressively leave academia as the career ladder progresses to more senior positions. There are many reasons for this including unsuitable performance or promotion metrics; work-life balance; lack of mentors; lack of role models; and unconscious bias. There are a number of schemes tackling these issues, such as Athena SWAN, but we are yet to see a significant change in the diversity of the STEM workforce, both inside and outside academia.

Soapbox Science has the dual aim of promoting the visibility of women in science but also bringing science to the people, direct from the scientists. This approach means science is accessed through public spaces, not in places where it has to be sought such as science festivals or museums. Too often these places are off-putting for many people. Soapbox Science is a kind of science ambush in places where you wouldn’t expect to be stumbling across scientists – such as a shopping centre!

The event is a fantastic means of public engagement. The public get to speak to scientists directly and also see that we are just like everyone else – our job being just one facet of our lives. The all-female line-up also helps to dispel the myth that scientists are middle-aged blokes with white hair in lab coats. For the speakers, it is an unbelievably exhilarating way to share and debate their research. I participated last year and although I was initially really nervous, it was a brilliant experience. It has given me confidence in public speaking and I have become more inventive when communicating my research to different audiences.

So for one day, at least, thecentre:mk will be a centre for science – and not just a shopping centre.