Homepage / How can we reduce flooding in places like Carlisle?

How can we reduce flooding in places like Carlisle? 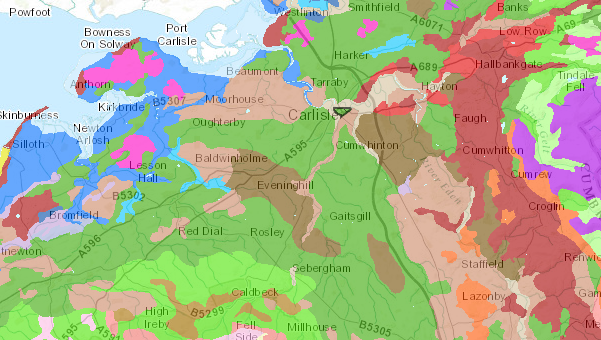 In the past week, rainfall in Cumbria has caused flooding of homes, wreaked havoc on the transport network, and resulted in one death. It certainly seems that these ‘unprecedented’ weather events are becoming more common, and future climate models  indicate that they will continue to be so for many years to come. There are many, many factors at play – including weather systems, land management, urban and river planning, and silt build up in our rivers. But, particularly in rural areas like Cumbria, what might farmers do to prevent flooding?

The main principles for flood management relate to the catchment area – the large area where water is caught before it then passes to a river. This often means that the actions of land owners can impact far beyond their land boundaries. The catchment area for Carlisle is massive (approx 2,500 km2), and is dominated by soils with impeded drainage.  Carlisle itself is built upon a flood plain, so there is, of course, a natural element to this flooding.

To reduce the impact of such heavy rainfall events on urban centres, we need to look right up to the top ends of the catchments, and consider four rain-related R’s: reduce, receive, retain, release.

Reduce the rain: How can we reduce the rainfall? We can’t really. However, trees can play a big role in reducing the rain that hits the ground.  Trees catch water on their leaves (or needles), where it might blow off or evaporate, rather than allowing it to transfer more quickly to rivers or streams.  As an example, conifers can intercept 35-45% of the rain that falls on them. Broadleaved trees between 15-25%. Trees also extract water from the soil to grow, so they reduce the background level of soil moisture. This means that when heavy rains do fall, the ground is much more ready to accept this excess water.  The tree roots also improve the soil structure, which improves water infiltration rates into the soil, and the roots themselves provide good hydrological pathways. While trees may not help with the traditional business of the farm, they could protect it, the surrounding area, and those living downstream, from the devastating impact of flooding. Trees are also excellent for capturing, and storing atmospheric carbon. As carbon is a contributor towards climate change and our weather is moving towards one where extreme weather events are becoming more common, lower carbon is a good thing.

Receive the rain: How can the soils, and aquifers receive the rainfall? Once lower levels of rain are hitting the ground, we need to ensure that the soil can accept the rain. While some soils are much more permeable than others (and there are over Soilscapes map) a compacted soil will not accept much water at all. An uncompacted soil may have infiltration rate of 60%, while a a compacted soil may see this reduced to 2%.  Compaction can arise from years of livestock stepping on the same ground, or the use of heavy farm machinery on wet soils. Compacted soils are a bit like a clogged drain – the water just can’t get to where it really needs to go.  So, if your soil is compacted, investigate appropriate options for uncompacting your soil (such as slit aeration) so that the water can enter the soil and filter through to the groundwater below.

Retain the rain:  Soils can hold on to the water for a short period of time, before releasing it through subsurface flow down the catchment or to the aquifers beneath it. Once soils are saturated (as they tend to be in upland areas an in winter months) other methods for retaining the rain may be required. Some farmers have experimented with winter rainwater harvesting (basically miniature reservoirs higher up the catchment, which they then use in the drier months, or slowly release once the storms have passed. Other approaches have included planting vegetation along drainage paths to absorb and slow the flow of water, and trap sediment.

Release the rain: With lower levels of water falling on the soil in the catchment, the soil is able to receive the rain. It is also then more able to retain the rain over short timescales, the release of the water down-stream will be over a longer time period. This will mean that we do not have a massive rush of water flooding down the rivers and into the towns at one time, but a longer period of higher, but much less devastating flows.

Farmers are not to blame for flooding. They respond to government policy. The logic of continued building on floodplains is, well, illogical. (They are called flood plains for a reason.) However, if scientists, the government, the EU and the whole of the agricultural industry can come together to work on providing the best natural defences, then we will be better placed to face Storms Steve, Nigel, Rhonda and Phil in the future.