Gender equality isn’t just for women – it’s for everyone 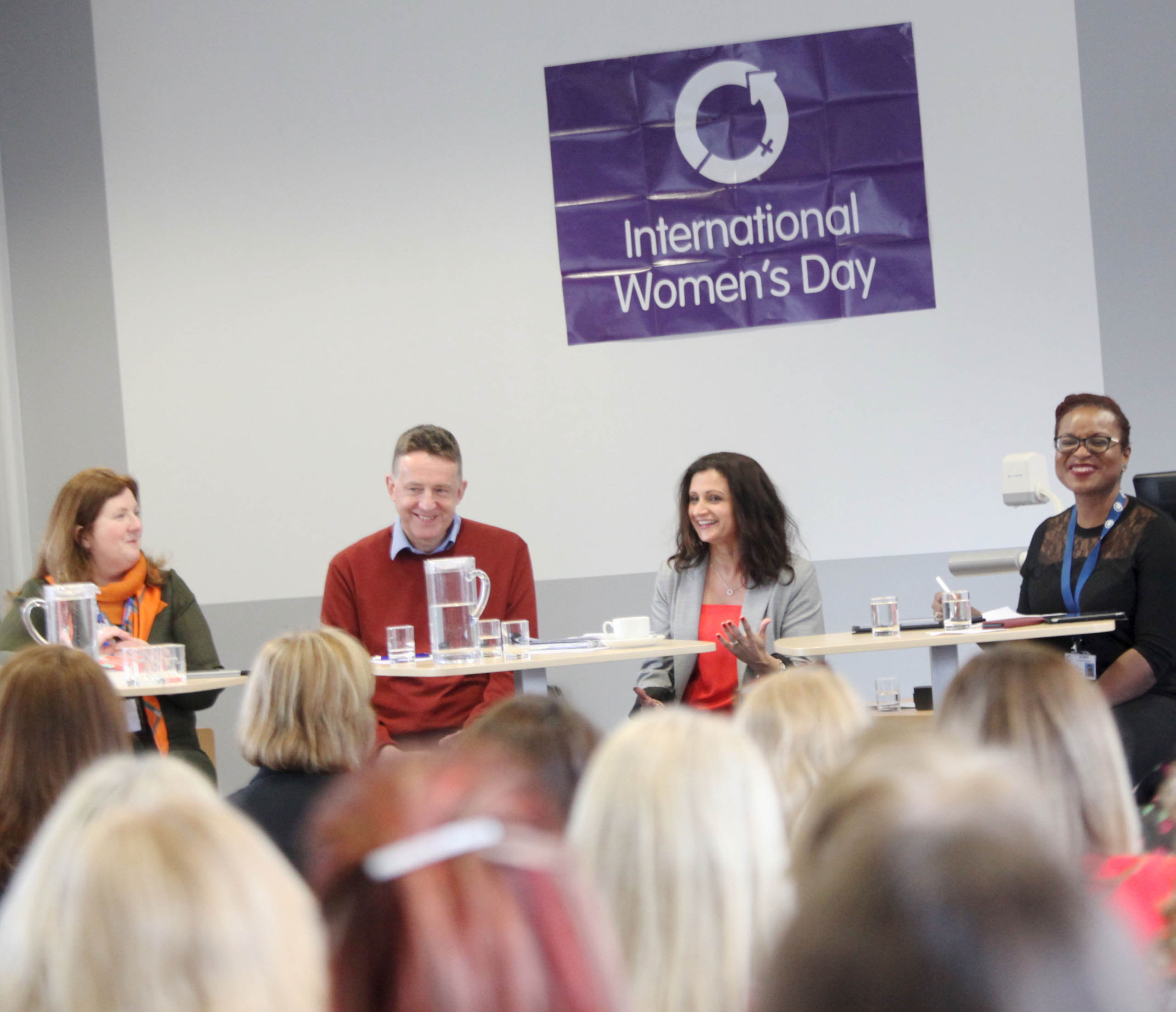 “Sometimes if we only talk about women’s working needs, confidence or leadership, the attention turns to the woman and turns away from the rest of the organisation – including the men.” Dr Doyin Atewologun, Director of the Gender, Leadership and Inclusion Centre, opened Cranfield University’s International Women’s Day event with this call for everyone to be allies in striving for gender equality. With the theme of #EachForEqual, Cranfield’s panel debate in front of over 90 people was a lively discussion of organisational culture and personal experiences.

Caroline Carter was a trailblazer within her law firm, being the first partner to have a child, and said: “If people offer you a helping hand, take it. Don’t look for obstacles, there are ways through challenges. I tried not to take offence and was prepared to carry people with me. By making friends along the way, and not enemies, you can change culture from within.”

Duncan Murray spoke about how you can learn along your career path: “In a previous role my boss was an impressive woman, and I learnt a lot from her about establishing an open culture where people can speak their mind and challenge you. You need to take the best bits as you go along your career.”

Diversity should be a way of life

“Diversity always has to be on the table,” said Caroline. “You have to be thinking about it if you want to create the best and most competitive workplace. To make real change, you have to get up every day and think about how you’re going to make a difference – can you help someone, guide someone or challenge someone? With a collaborative mindset, where people can work with anyone and everyone, you have a better organisation.”

And Hiran Odedra agreed: “By creating a diverse workforce, you’re naturally going to have a more inclusive organisation. Where people are valued and treated fairly, you will get more productivity. Organisations with an inclusive culture retain staff and attract talent.”

Set a target then work out how to get there

Duncan drew inspiration from JFK who became President of the USA and pledged to get a man on the moon by the end of the decade. NASA achieved it with six months to spare. “At the time he [JFK] said it, they didn’t know how they’d get there. They set an ambitious target then worked out how to reach it, and I like that as a strategy.”

With Accenture pledging to have a 50/50 gender balance in their workforce by 2025, and Vodafone aiming to be the best employer in the world for women by 2025, it’s clear that some organisations also embrace this approach – I’ll be following their progress closely in the next five years!

Call out behaviours that aren’t acceptable

Hiran recalled walking out of a meeting with a recruitment consultant when her ethnicity was mooted as a factor in her not getting a role. She encouraged everyone to call out inappropriate behaviours, noting, “you can do this by talking about the impact it has had on you. When I was leading a working group it was assumed I was the secretary – I had to point out that I was chairing the meeting. At the end, I spoke to the person concerned and told him how it had made me feel.”

Caroline noted that none of us are immune to mistakes, sharing a personal example, and Doyin suggested we acknowledge an issue, and “be gentle with yourselves.” She continued, “We could all be culpable. Reflect, if needed, in your mind, or with your team – what can you learn from it even if the moment has passed?”

Can you challenge your own mindset, and that of others?

Doyin urged us to challenge our own assumptions that reinforce an ‘us versus them’ culture. It’s easy to assume that older people have a closed outlook on diversity, for instance – but this might not be the case. If people have an open mindset, no matter what their age, gender, creed or background, then change can happen. So it’s vital to tackle values, outlook, behaviours and mindset – both within ourselves and in others, even if it’s difficult. We all have a role to play in #EachforEqual – and there’s a lot we can achieve if we work together. Let’s be brave.

A view from inside the Energy Entrepreneurship module

I'm Wayne Coulter, Marketing Manager in the School of Water, Energy and Environment here at Cranfield University. As part of my job I work with our students to produce content that tells the story ...

Attending to your mental and physical wellbeing whilst at Cranfield is key to creating the ideal environment for academic success. There will be times for us all when the mind needs peace and the ...