Homepage / Cranfield’s National Flying Laboratory Classroom – up in the air

Cranfield’s National Flying Laboratory Classroom – up in the air 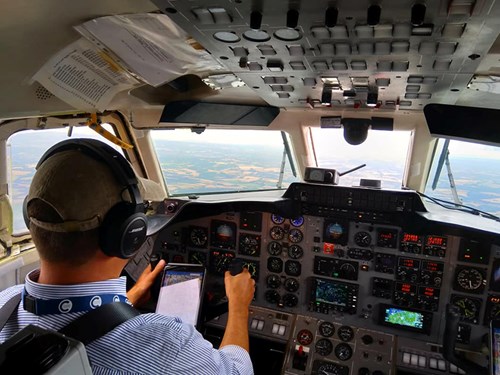 How better to learn about aerodynamics, than by experiencing them in flight? Andy Foster, Senior Lecturer, Cranfield University, explains the role of the institution’s unique Jetstream 31 ‘flying classroom’ – which is now aimed to be replaced by a newer and larger type.

Since its formation in 1946 Cranfield University has operated its own aircraft for teaching and research purposes. Today it operates a BAe Jetstream 31 modified and instrumented to allow students and researchers to experience the role of a flight test engineer.

The aircraft is a UK national asset and is used not only by Cranfield staff and students but flies students from UK and Irish universities as part of their undergraduate aeronautical engineering courses. Each year around 1600 students are flown from 25 universities.

Pay attention at the back!

As an example of a flight test course a demonstration flight was flown out of Cranfield Airport on 6 June for a couple of potential Universities and some journalists.

Having departed off Runway 21 the Jetstream climbed out of Cranfield and headed over northern Bedfordshire where it carried out a number of manoeuvres to demonstrate some of the flight test course components.

Longitudinal manoeuvre stability was demonstrated next with incremental g forces from 1 to 2g being experienced by the occupants as the aircraft was pitched. Such a test, as for a number of those demonstrated, is a certification requirement set out by the international regulators for new aircraft design.

Next the longitudinal dynamic stability of the Jetstream was demonstrated with both the Short Period Pitching Oscillation (SPPO) and Phugoid experienced. These were followed by lateral dynamic stability modes – Dutch Roll, roll mode and spiral mode. Such manoeuvres can be unsettling to passengers and part of the pre-briefing is to point out that airsickness bags are available!

Does your university classroom have a view like this? (James Hill)

Finally a demonstration of the stall characteristics and recovery were demonstrated with the aircraft being pitched up to demonstrate the stall warning system, stick shaker and ultimately the impact of the stick pusher leading to dramatic pitch down.

The flight was completed with a couple of flyovers the Cranfield campus before coming into land around 40 minutes after departure.

This week the aircraft is at Southampton Airport carrying students from the Aeronautical Engineering course at University of Southampton which is accredited by the Royal Aeronautical Society. The aircraft registration is G-NFLA so you can follow it on FlightRadar 24..

Looking to the future

The Jetstream 31 is now over 35 years old and reliability and operating costs have led Cranfield University to make the decision to invest in a replacement aircraft a Saab 340B. Newer and larger the aircraft will enable more students to be flown but also it will be capable of carrying more research sensors and equipment providing an additional use for the aircraft.

To obtain and modify the aircraft into a flying laboratory will cost upwards of £3m in total and to assist with this the University is reaching out to industry, partner universities and alumni and friends via a funding call.

More details on the project are included on this site: https://www.cranfield.ac.uk/about/a-new-flying-classroom-and-laboratory

Cranfield will be attending the Paris Air Show where more details on the NFLC will be available and also information on plans to develop the site as a Global Research Airport including a Digital Aviation Research and Technology Centre.

Finally a call out to Cranfield alumni who studied Aerospace and Aviation related subjects:

On 3 July 2019 the Cranfield College of Aeronautics Alumni Association (CCAAA) will be holding their AGM at Cranfield University. We would like to extend an invitation to all alumni of courses in Aerospace and Aviation related subjects and would request that they contact the address below to register their attendance and/or to allow us to update them on current and future activities at Cranfield.