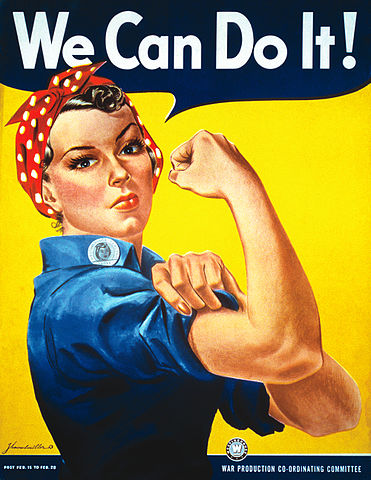 I don’t have much in common with Katy Perry. We do share a country of citizenship and an affinity for Friday nights (though hers seem far more exciting than mine!) but I must admit, that we are both equally guilty of a very common faux pas. Just one simple phrase: “I’m not a feminist, but…”

Feminism. It has often been called the other “F” word as it seems to have such negativity attached to it. The definition of “feminism” according to the Oxford dictionary is this:

The advocacy of women’s rights on the ground of equality of the sexes.

I personally have nothing wrong with this concept in theory, so why am I so averse to saying it out loud? This was the topic that the Women in Leadership group discussed at our last topic night discussion.

To start our discussion, we began by watching a video of Joss Whedon (of Buffy and Firefly fame) on his thoughts on feminism, which I’ll summarize here. He dissected the word “feminist” and explained why he thinks the etymology is partly to blame for its negative connotation. He goes on to describe a grey area society has created between “sexist” and “feminist” and how some feel more comfortable (myself included) to be classified as neither. His final sentiment is to posit the word “genderist” as a base neutral way to change the way we discuss this topic.

Even amongst the members of our group, the word “feminism” was still controversial, but we used this meeting as a safe space to share our ideas. We broke our discussion into two contexts.

The first context is how we often see “feminism” in our own lives, most commonly equality in the workplace. We spoke about whether we felt women had to act differently to be seen as equal in the office. We are inherently different, but is there a bias towards one gender? Some people felt they needed to be more masculine to fit into the current corporate culture to be considered an equal, ie. playing golf or watching sports. Others spoke about just the opposite, women using their “feminine charms” to help them succeed. But these are the two extremes on a spectrum, what about the range of behaviour in between? Are women who are on neither end of the spectrum simply forgotten?

We all have varying experiences and different points of reference, but the point of this discussion and of this blog post is not to come to a concrete conclusion on what needs to change. Some of us have seen situations where there is clearly inequality, in other places it is more nuanced, and this has affected how severe we think the problem is.

Watching an episode of Mad Men will remind you that not too long ago, women being respected in the workplace, let alone be seen as equals in the boardroom, was a faraway dream. We all hoped that by bringing awareness to any unconscious biases from both sides, we improve any discrepancies slightly with each generation until someday we won’t have to have this conversation. We were all in agreement that a lot of it has to do with education and leadership, showing girls AND boys from a young age, that their gender (nor any other point of differentiation) should not limit their potential.

The other side of feminism is about basic human rights and dignity, and how in some countries, often developing, but also in the UK, these are taken away because of your gender. We would be remiss to think that from our place of privilege, we can discuss workplace etiquette and overlook the basic discrimination of women elsewhere. This was an equally touchy and emotional conversation for our group, many personal stories and confessions were shared, and I know I came out of it wanting to do more. At the very least, our collaboration with HERA is one thing that we as a Cranfield cohort can do to help make an ounce of a difference to help women who are not as lucky as us to fight for opportunities.

For me our discussion was incredibly thought-provoking. Though I’m still a little weary of the dreaded “F” word because of the current connotation, I am more willing to explain my case. It’s a delicate subject, but if we can talk about it, openly and without judgement, then we will be less fearful of what we don’t know. Trusting preconceptions and assumptions are the antithesis to progress.

Feminism does not inherently mean anti-men, it does not mean you need to burn your bras or ditch your razors. For some people, this is a way to express the idea, but at the core, feminism is a simple sentiment of people being equal, and that is something I am willing to get behind.