My experience of being selected for the Chevening Scholarship Award

My love for British postgraduate education dates back to 2006 when I applied and was accepted for the now defunct MSc Advanced Irrigation at Cranfield University Silsoe Campus. Unfortunately, I couldn’t enrol because I did not secure a scholarship to fund me. This would be the trend for the next 10 years until 2016, when I saw an advert online for the Chevening Scholarship Award.

I read through the conditions and learned it was a prestigious scholarship offered by the Foreign Commonwealth Office, centred around leadership and networking. I thought I qualified for this scholarship because of my work experience and leadership roles I had occupied while growing up at school, university and the community. So, I applied in 2016 for the 2017/18 award after having been offered a place of study at Cranfield University on a course that was previously called Community Water and Sanitation MSc, now called Water and Sanitation for Development MSc.

This subject is of interest to me because it addresses Sustainable Development Goal 6 (SDG), adopted by the United Nations in 2015 as feeding to Agenda 2030. The Sub Saharan Africa is far behind in the area of WASH so that’s what motivated me to seek funding to further my studies in this sector.

After doing an interview in Swaziland with Chevening in 2017, I was put on as a “reserve candidate” pending the submission of certain documents, including an English Test. At the time I couldn’t take the test and thus could not submit it before the July deadline, so I missed out. I applied again for the 2018/19 award and was still put on as a “reserve candidate”. Nonetheless I was optimistic because I had taken the English test and met the required mark. I submitted all documents and then it was a waiting game to find out if my reserve status would be turned to a conditional offer.

I can still clearly remember opening my email in Lesotho, where I had gone for a conference, and seeing an email from the Chevening Secretariat informing me that I had been selected for a conditional offer (pending completing the process to arrive in the UK which included being granted a Tier 4 visa). It felt like I was dreaming! 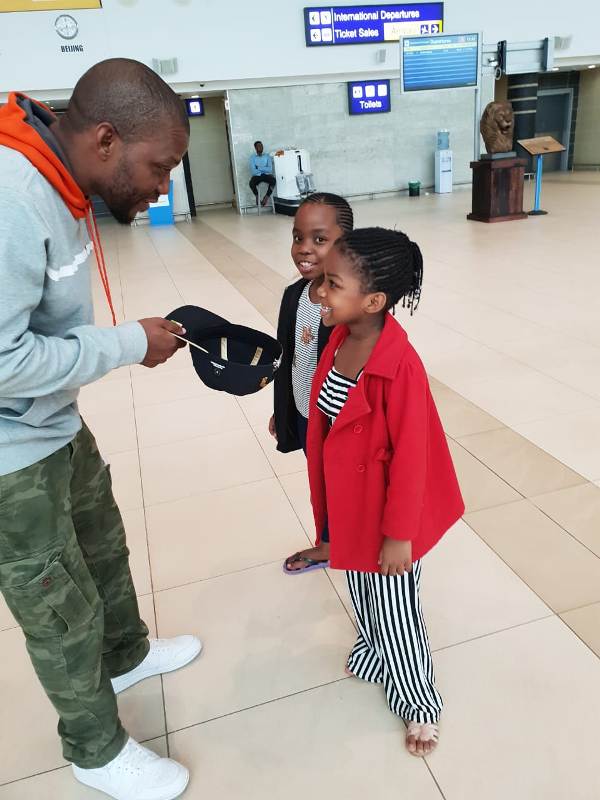 My children seeing me off at the airport in Swaziland

After all the toil and attempts to secure funding to study in the UK, I had secured such a prestigious scholarship. I still had to wait for the formal award letter which felt like it was taking forever, it would be the signed confirmation that I indeed got the scholarship. It finally came in August and I felt very happy indeed. The process to get a visa to the UK then started. After receiving the visa and the air ticket to the UK in September that is when it all sank in. I was indeed going to study in the UK and I am funded by the Chevening Scholarship! It feels great to be a Chevening scholar and our stay in the UK is supported by our wonderful Programme Officers and the living stipend is enough to support our living in the country.

Next Post
Our visit to the River Island warehouse

Mphikeleli Mamba is one of the Chevening Scholarship scholars currently studying our Water and Sanitation for Development MSc.

Study in the UK with a Cranfield University GREAT Scholarship