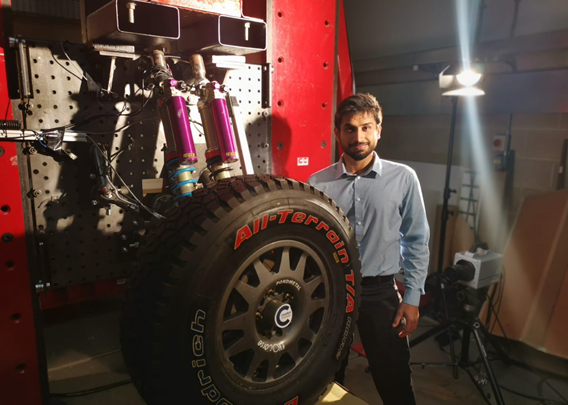 “Most of the F1 teams are from the UK and are focused on students that come from the universities which give the best exposure to motorsport teams. Cranfield is probably the best one.” – Rahul Bhat, 2021

Following his impressive thesis project he secured the role of Rally Engineer at Prodrive. Prodrive are a British motorsport and advanced engineering group based in Oxfordshire who design and build race cars.

As part of the Advanced Motorsport and Engineering MSc at Cranfield University students have the opportunity to work on exciting, and sometimes confidential, cutting-edge projects from motorsports companies. The individual thesis project runs until early September. Thesis projects allow the students to deepen their understanding through research work related to motorsport.

Rahul’s project was based on the development and optimization of the existing suspension system that Prodrive rally car were using. Prodrive pitched the project to Cranfield and Rahul was selected to work on it based on his previous experience working with off-road vehicles. Working closely with Prodrive to understand how the car had been functioning Rahul helped to engineer an all-terrain suspension set up as part of his thesis project.

Following this project Rahul secured the role of Rally Engineer at Prodrive. He attributes his success to his thesis project which enabled him to showcase his skills to Prodrive whilst making contacts within the industry.

“Working with Prodrive showed them the potential that I have through working on the car. It ended up with me getting an interview with them after I got in touch with the team principal and asked them if they had an opportunity” – Rahul Bhat, 2021