Homepage / My initial impressions of Cranfield

My initial impressions of Cranfield 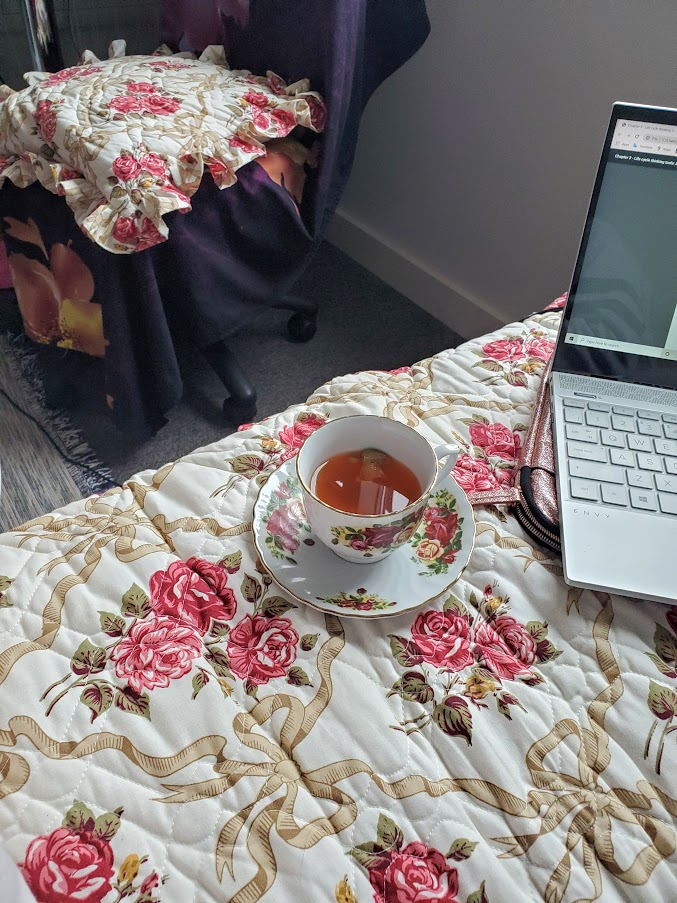 Hi! My name is Simran Dev, I am a Thermal Power MSc student, specialising in Aerospace Propulsion, and I will be sharing my experience at Cranfield for the first semester. A bit of background on me; I am an Aeronautical Engineering student from City University, and I am from London.

In late October I moved into my student accommodation in Chilver Hall, a lovely room overlooking the tennis courts, sports field, and an abundant apple tree. Sadly, most of the apples were bruised before I could pick them. After arranging and decorating my room, I collected my ID card the following day with a very nice starter pack containing all the information I needed for navigating around the campus and Cranfield life, plus some colouring and origami sheets to promote mindfulness during these rather strange times, especially for the quarantining students. My flatmates were mostly in quarantine but thanks to social media, I was able to connect with them well before moving in, so when they finished their quarantine period it was like meeting someone I had already known. Other flatmates, I got to know in time whilst in the kitchen, and it was lovely as everyone was from a different part of Europe so we all had exciting stories to exchange of our vacations and hometowns, whilst waiting for our pasta to boil or washing the dishes.

The following day we had the virtual introduction day. I could finally put a face to the names of all 80+ students in the Thermal Power WhatsApp group and could e-meet our Student and Academic Support Lead, Xani, as well as our Course Director, Dr Theoklis Nikolaidis. Both were super lovely and warmly welcomed us. Having online introductions were very different from my undergrad induction lecture held in a lecture hall of 300+ students, but I felt it was done in the best way possible and I instantly felt like the lecturers and support team regarded us as colleagues and were genuinely available to help us, which is a very nice feeling to have when starting a new course and university.

Adjusting to Cranfield life, a topic just as important to me as was settling into the course. As mentioned, I am from London. I have been born, brought up, studied, worked, and played in the same city for 23 years. I knew moving 70 miles away from home and into the countryside of Cranfield, especially during a pandemic, would be a very polar-opposite experience to what I had. So, I constructed a routine to keep me occupied. I would wake up at 6 am, freshen up, make my coffee, then take my ten-minute walk to lectures for 8 am (very convenient). This would often be my moment of mindfulness, walking through the sports field often with wet trainers whilst watching the sunrise – so much nicer than my former 40 minute Underground commutes during rush hour. After lectures, I would go for a run, reminding myself every day that I should buy a tennis racquet to play tennis (but never getting around to doing it). Finding a tennis partner with a spare racquet was not a problem as there is a tennis group chat linked to the Cranfield Facebook page. Running is nice around Cranfield, there’s a short but sweet woodland trail, a very big airstrip spanning each corner of the campus to jog making me periodically stop my tracks in awe to admire the Boeing 737 parked up or the dormant prop-fan planes, or the goats and sheep in the farm plots dotted around – being from a city, these farm animals never failed to stun me. Cute fluffy animals? Farms? Next to my campus? Wow!

Then, I would either run some errands or cook. I shared a kitchen with six others, but I was lucky enough to bring frozen curries and meals from home every weekend. If not, I would drive down to the supermarket; an activity I realised was an amusing past-time among many other university students. Having a car makes life easier in a village, but Cranfield’s regular bus service makes up for not having a car, I know this as I would run past a bus every five minutes. I explored other places around Cranfield, such as MK central, Woburn, Willen Lake… these were all very proxy to Cranfield and nice to explore. My flatmate went pumpkin picking during Halloween season as well as a handful of day trips, he covered more mileage than me without having a car, which shows that getting around the UK is super easy via public transport or carpooling.

However, after two months, I had to move back home to London for personal reasons and decided that I would commute for the remaining and next semester. My student support lead was very helpful in this transition period. Life in the village can get a little lonely at times, and I struggled with mental health – it can be a sensitive topic to talk about but I’m mentioning because I was so appreciative of the support network Cranfield offered. I had a student advisor who scheduled some Teams meetings with me and helped me overcome whatever I was feeling, there were other points of calls he referred me to which I didn’t end up needing. My thesis supervisor was also very understanding, and I felt that any issue I had was solved and supported so efficiently and discretely. This is why I urge anybody feeling anxious or lonely to reach out, there is no harm in doing so, speak to people from your course, speak to the support team of your course, the student advisors… everybody can either relate or offer something. Living in Cranfield, or any rural campus, during a pandemic is undoubtedly really hard and can affect everyone differently, but there will always be a point of call that will eventually help you feel better- so please be informed, aware and unshy!

In my next blog post, I will cover my impressions of the academic and technical aspects of my MSc course in Thermal Power. I hope this will inspire anybody interested in this MSc course or planning to join Cranfield!