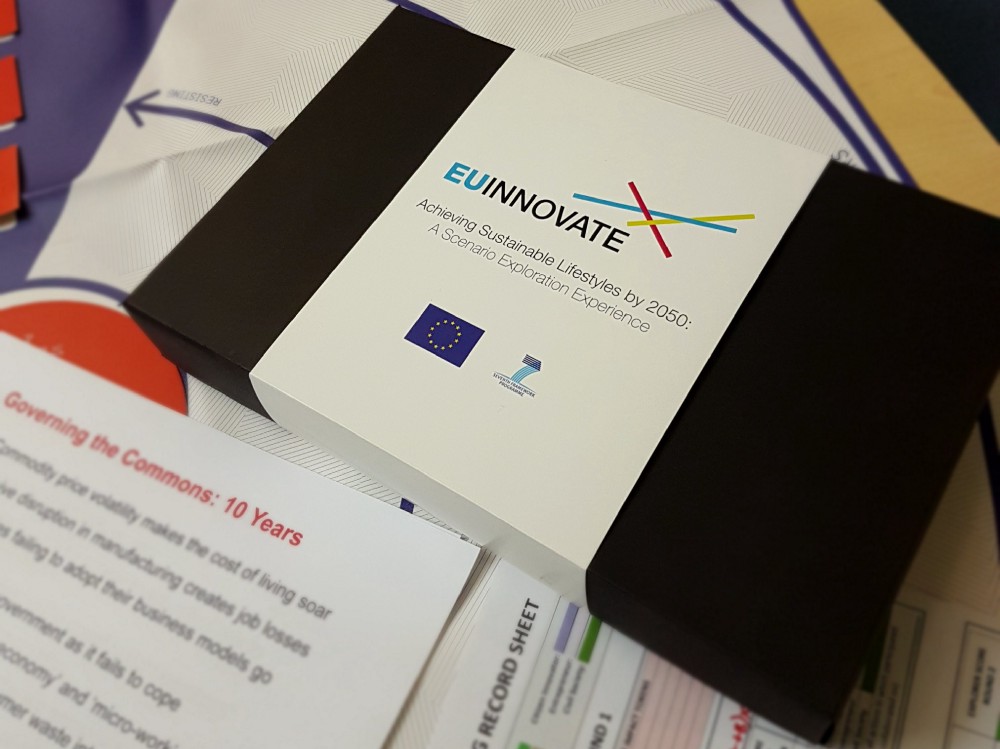 Gamification is the application of typical elements of game playing (e.g. point scoring, competition with others, rules of play) to a more serious business or policy environment has increasingly gained attention in the last years as it is a more engaging way of learning and exchanging compared to more traditional workshops and seminars. Our authors recently had a first-hand opportunity to see the potential impact a game could have in an education context.

As part of the Leading Corporate Sustainability module, students on two of Cranfield’s programmes – the MSc in Management & Corporate Sustainability, and the Masters in Management – had the chance to travel into the future — in the form of a serious role play. The “Scenario Exploration System Game”, developed under the European Commission’s 7th Framework Program is not just a board game: it is a way of interactively exploring different scenarios each describing a society which meets the environmental boundaries and social conditions needed for sustainability in 30 years’ time.

Against the backdrop of climate change, urbanisation, resource scarcity and other important global trends, the students were challenged to find ways to innovate while still attaining the UN Sustainable Development Goals. They were thrust into a scenario where the world became further globalised and where bottom-up initiatives were thriving. A breeding ground for diversity, participation and self-organisation.

Each player represented a type of societal stakeholder, such as large multinational corporations, policy-makers, entrepreneurs or non-governmental organisations. In every round, the players were tasked to come up with ideas and solutions to respond to societal challenges, such as increased unemployment due to automation, a collapsing faith in centralised authority and deteriorating social equality in megacities. The decisions made by each player involves them spending their resources and ‘winning’ resources back. The collective decisions (each actor’s decisions also can have an effect on the other players, and they can work together) will affect the type of society that ends up being created. At the end of the game, players can reflect not only on the result of their decisions but also the nature of the decision making itself and the interdependence of these decisions between different social groups.

According to the students, introducing the game as an element to their module helped bring to life the complexities of bringing about transitions to a more sustainable future. One of the hardest parts was imagining actions and initiatives 10,20 or 30 years down the line. ‘Imagining actions for a 10-year horizon is already difficult with all of the technological innovations that are currently being developed, such as driverless cars and artificial intelligence. But thinking 20 or even 30 years ahead was extremely difficult. It really put you on the spot and forced you to innovate.’

“It shows how we can collaborate and be a more sustainable society. It puts into perspective on how organisations could and should act and should be played by all people being in these roles in real life.”

In one of the teams that played, the final winner was the citizen innovator, who clearly focused their efforts around water conservation, especially in urban areas. One of her efforts was developing ‘sponge cities’ — vertical farming, more green spaces — that would prevent against overflooding and improve the air quality in cities. She was coming up with good ideas in line with the cause that she was championing. It provided an authentic and coherent message. That way people gained trust and confidence in her ideas, which made the other players support her. In that sense they learned the importance of having a clear strategy and focus in building trust.

“It gives a great chance to get a new perspective on how we can, enabled through technology, collaborate and improve the state of the world as it takes everyone’s efforts”

In terms of bringing about sustainability, the players learned about the importance of collaboration between stakeholders. “When you have a vision, another stakeholder can add to that. This can create multiplier effects and magnify the overall impact. The game and its rules around collaboration made this factor really clear”. In the beginning, it was more about finding ideas and collaborating with others, but as the game advanced, players became more focused on driving their own agendas forward. They wanted to focus on their own initiatives and were less likely to innovate. Nevertheless, the design of the game ‘showed that collaboration on the right ideas is definitely win-win. As long as it has the support of multiple stakeholders.”

Rosina Watson, the module leader from Cranfield School of Management, used the game to offer students a new perspective.

“I used the game to help students imagine the future beyond the 3–5 year horizon of the typical corporate business or marketing plan and to reflect on what success might look like in these future worlds. I wanted them to see businesses as operating as part of a wider system and experience working with societal stakeholders to achieve their visions.”

The event was also facilitated by Marco Matrisciano from ABIS (The Academy of Business in Society), the organisation that was involved in the development of the game. According to him, it was the first time the game was played in an educational environment. For him it was interesting to see the difference between students and experienced professionals playing the game.

“When you play the game with the real stakeholders, explorers how we call them, you see that they have a clear strategy from the beginning to the end and they follow their long term vision which and you can see that all the action they place in 10–20–30 years they are going to achieve their vision. Of course if you are playing with people who lived their role for 10+ years that they interact differently, but the learning effects are great for every one” says Marco. “Stepping in the different roles in the society closer and show them how networked the world around them is can really be a great learning outcome for the students. However, it is challenging to personify with someone that one only knows thorough media. The best feedback was that they didn’t use their phones for 2.5hrs.”

He also emphasised the value that these types of serious board games could have in an educational setting.

“This kind of serious game is a way of helping people to collaborate and develop a dialogue which is crucial for the success of the scenarios and you adapt in real time to actions played by others. In my opinion, this is not possible as you need to talk and interact directly with the others. The conversations in the game with the real representatives are really serious and the participants always tell us that they learned something. In a traditional digital form this is not possible, as it is not interaction but mere question and answer. We used this game as well as a tool for active networking and bring together different interest groups. Interestingly, professionals don’t use the term game because no one would have time for that, but it is a new way of engaging. One nice example of how the thought process of one student was triggered was when he described his role as policy maker and had to choose between the company investing in a new facility creating jobs but polluting the environment or have unemployment.”

Using games can really help increase engagement — whether its in your classroom or the boardroom. They address human nature and can provide an interesting alternative to the usual teaching methods.
This post was originally created by the Circulo Collective on Medium.