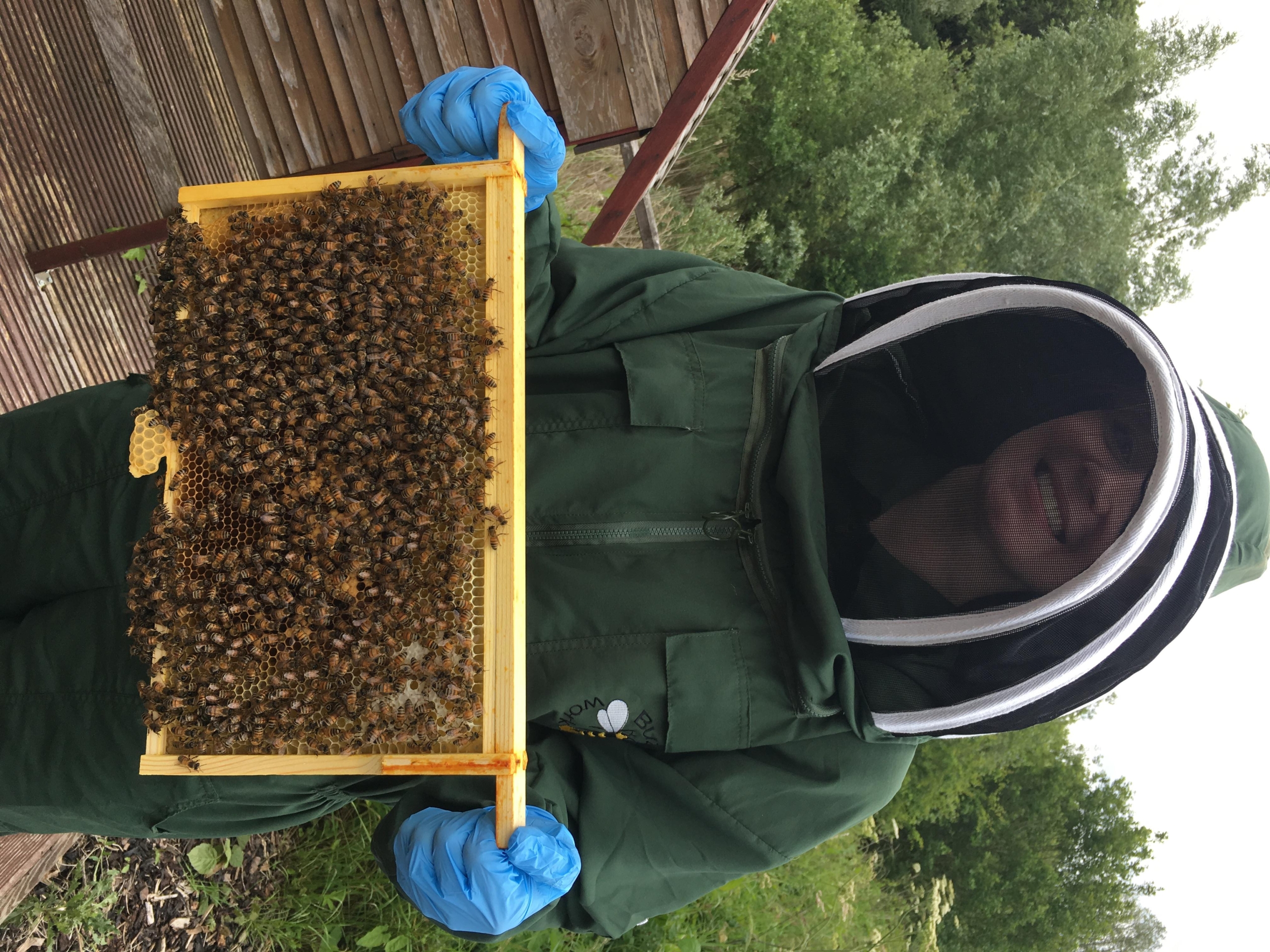 It’s not every day you get the chance to don a beekeeping suit and get up-close and personal with the local bees at your place of work, but in June, that’s exactly what I did.

Our Energy and Environment team have done an amazing job over the years revitalising our campus with biodiversity. We’ve won awards for our grounds from Nurture (our grounds maintenance team), The Wildlife Trust at Work and were just nominated for a Green Gown award. However, there’s no one that enjoys our wildflower meadows more than the neighbourhood bees, who had their house-swarming in 2016 when Nurture introduced them to campus.

Though staff are invited to help harvest some of the honey each year in autumn, this is the first time that Nurture have run an open doors staff tour of the hives themselves. The tours were fully booked in a matter of days, so clearly it’s the event colleagues had been waiting for!

We began the session by learning a bit about why we have bees on campus. Most of us are aware that bees are vital to our survival as the key pollinators of plants and that they are also under threat as a result of disease and lack of habitat. By installing these bee hives on campus, we are not only supporting an increase in population, but also helping to raise awareness on the importance and value of these species.

Some of my favourite nuggets of information from this introduction were:

Classroom work over, it was now time to do the field work. We put on our bee suits, made sure not to leave any skin exposed or laugh at how ridiculous we all looked, and made our way to the hives. A member of the Nurture team blew smoke into them – a beekeepers secret weapon to avoid getting stung and distressing the bees, apparently – which enabled us to look inside with ease.

We were handed some of the removable frames to inspect parts of the hive where bees build their honeycomb, and within these, we were able to identify larvae, reserves of capped honey (which shows that the bees have plenty of food) and nectar. We were also lucky enough to spy the local celebrity herself, the queen, roaming around in all her glory! She was absolutely huge and marked with a big splodge of green paint. Beauty is in the eye of the bee-holder, I suppose!

I feel really fortunate, not only to work in a staff communications team where I help to organise fun and interesting tours like this that get colleagues out exploring the great work that takes place on campus, but also to work for a University that is so committed to making the world a better place through its large and smaller-scale deeds. We have a huge global impact through the research we undertake, but helping a vital, endangered species of insect to thrive locally is a real achievement too. Keep an eye out on the intranet over the coming months to book your place on the annual September honey harvest, where colleagues can help extract the honey and take a jar home to enjoy. As a lucky recipient of one last year I can confirm it tastes un-bee-lievably good.