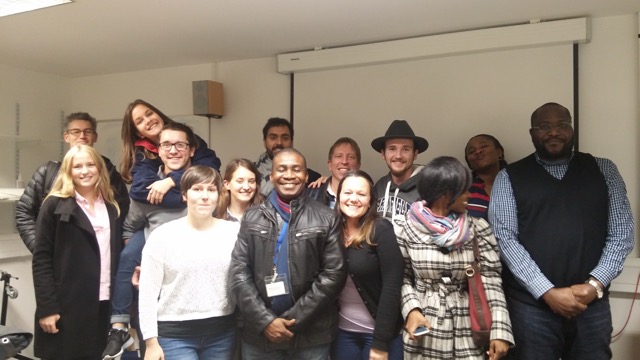 I hadn’t imagined I would ever be going back to university again, much less that I would go back as a full-time student.

Thirty years of working in the corporate world of international telecoms and IT services came to an end for me in 2015 with a redundancy. When that had happened once before I rang up my network, went out for lunch meetings, and started the job search and application process.  This time, though, I just didn’t feel like going back to doing the same thing. My last job was marketing IT systems for checking in passengers and their bags at airports. While that is an important thing for people who travel in planes, it doesn’t exactly change many people’s lives for the better. At the age of 59 I thought it was time to do something that had a bigger positive impact on lives and I didn’t want to continue being just another cog on the corporate wheel. A chance meeting at an airports industry trade show opened my eyes to the area of sustainability and its vital importance to the survival of businesses – and of the human race.

My two sons were now 34 and 30 years old and well into their own careers, and my older son and his wife had just given birth to my first granddaughter. My wife had a solid job as a corporate lawyer which meant we could afford to get by on one salary for awhile. I researched Environmental Management programmes at five universities and applied to two of them, Imperial College and Cranfield.  Getting copies of transcripts for the applications was a challenge. Having received my BA and MBA degrees at U.S. universities over 35 years ago I think they had to go down into their dusty vaults to find paper copies of them! On the first day of orientation week I met my group of 10 twenty-something Cranfield classmates. We were instructed to pair up and interview each other and, to make things interesting, we were required to include in our profile an unusual fact about ourselves. We were then to take turns introducing our interview partner to the entire group. My partner was a young Greek woman. I told her my story and my interesting fact: I was a grandfather. When she introduced me to the rest of the class and told them this, they broke out in spontaneous applause! It was a nice way to be welcomed and from then on I never once felt out of place or incapable of relating to my much younger classmates. In fact, the only time our age difference was really apparent was when an instructor would refer to some notable event from the past, saying, “Now, you won’t remember this, but…” – but, of course, I was the only one who DID remember it!

The taught modules went by very quickly – too quickly. I was just warming up and then suddenly they were over and we had a week to do our assignment. This was very different from when I was last at university. Back then we had a class for an entire semester and its content soaked in gradually and surely over 10 weeks. But I accept that this is the way higher education now works. Focus, get it done, and move on. That continued for eight modules and, by the end, I realised that my younger classmates and I basically arrived at the same level of understanding of all the coursework. I accepted that this was the pace that a generation raised on Google and YouTube naturally worked at so I was pleased that I had kept up with them!

Living near Brighton made it too far to commute to classes so I got a room in Lanchester Hall to use during the taught class weeks. There I shared a kitchen with five other guys. While I enjoyed the occasional discussions at the communal dinner table, sharing a kitchen is the one part of my Cranfield experience that I am least likely to miss! I developed a reputation for not tolerating a messy cooker and kitchen sink. Luckily for my kitchen-mates I was only on campus every other week. One thing that surprised me was that my residence hall was very quiet. I was expecting loud music until late at night.  Not at all.  Another difference from my previous uni days.

One thing about being older and more experienced is that you don’t mind expressing your opinions. I guess that was why I was made the course rep of our class. That and the fact that being closer in age to the academic faculty made it somewhat easier for me to relate to them. Sometimes my classmates were quick to complain about instructors. I’ve noticed a definite change in the student-teacher relationship. Students are now seen as – and behave as – clients or customers and if the customers don’t think they are getting their money’s worth they make that known. While I think that’s mainly a good thing I tended to see the lecturers through the lens of my own work experience. These are busy people with their strengths and weaknesses, trying to do the best job they can with the resources and support that they have, just like in any other business.

I thoroughly enjoyed being a ‘mature’* student. It was a pleasure to have the time to learn and to have another chance to build study habits that I should have done my first time around. I think I spent more time in the library during the first two weeks of class than in two years as an undergraduate! But the greatest part of my Cranfield experience was the interactions with my classmates. Without exception I found them to be hard-working and serious-minded yet cheerful, open, and just nice to be around. That bodes well for the future as they move into jobs and make decisions to help us keep our planet from degrading. And maybe one of them will hire me as an assistant?

*I don’t like the term “mature”. Maturity is a state of mind. I prefer to call myself a ‘later-life student’.