Homepage / Why the UK is developing floating wind farms

Why the UK is developing floating wind farms 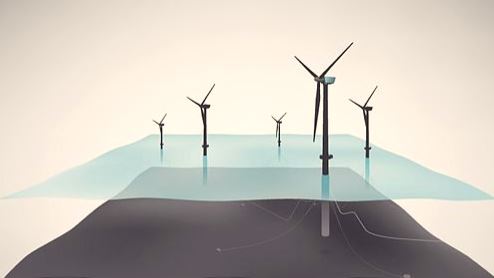 Statoil has made the final investment decision to build the world’s first floating wind farm after getting an approval from the Scottish Government in early November 2015. So, why is the UK developing floating wind farms?

The government are mostly relying on wind to fulfil this target because it is one of the most reliable energy sources in the UK, and the wind turbine technology is the most mature. The government intends to install a wind power capacity of 15GW onshore and 13GW offshore. This is an incredibly ambitious plan. The average rated power of a single onshore wind turbine is 1.6MW (enough to power around 800 homes), and offshore wind turbines are 3.5MW (enough to power around 1,750 homes). To meet the target, we need around 8000 wind turbines onshore and 8,500 turbines offshore. At the moment, the UK’s wind power capacity is around 57% of the target onshore, and 39% of the target offshore.

Why ‘far offshore’?
So far, most wind farms have been developed onshore or near shore, in shallow water depths (usually less than 30m, and just few km from the coast), but there are already plans to develop wind farms hundreds of km from the coast and in deeper waters: the so-called Round 3 sites.

The advantages of being so far offshore are clear. First of all, the average wind speed is higher, and the power that can be extracted goes with the cube of the wind speed. So, if the wind is twice as fast, you can get 2x2x2 the amount of power – 8 times as much! Secondly, the wind speed is more consistent (blowing more often at higher wind speeds), therefore these far offshore wind farms can deliver more electricity. The wind far out at sea is also less turbulent and more uniform thanks to the fact that the sea surface is much flatter than a typical onshore or near shore landscape: this, again, is beneficial for the loads on the wind turbine. And, new, wider sites can be exploited, with partial or total elimination of visual impact.

But the most important factor is that offshore wind farm sites offer the possibility to further scale up the size (and therefore the power) of the wind turbines used, helping to lower the final cost per kWh of energy produced. In fact, the bigger a wind turbine is, the more efficient the whole system becomes, generating energy at a lower cost per unit of energy – which can only be good for household energy bills.

Why floating wind farms? Where and at what depth?
The cost of fixing wind turbine systems to the seabed increases exponentially with water depth. However, the cost of floating wind turbine systems increases less with depth. At a certain threshold, a floating solution is more economically viable. That threshold varies depending on the wind, waves, tides and seabed, but is roughly around 50m.

A complete wind turbine could be installed on the floating support structure at the quayside, and could then be tugged out sea using simple tugboats to the offshore floating wind farm. This is much more cost effective than fixed wind turbine installation which requires specialised vessels for installation. And, for major maintenance every few years, the floating turbine can be detached from its mooring and pulled back to port for repair at a fraction of the cost of the same operations offshore.

Which wind turbines?
Horizontal Axis Wind Turbines (HAWT), are the classic turbines we are most used to seeing. They have their axis of rotation horizontal to the ground. Vertical Axis Wind Turbines (VAWT), have their axis perpendicular to the ground. Onshore, HAWTs dominate, but offshore there may be a niche market for VAWTs, especially for floating wind turbines. This is the finding of several research initiatives from all around the world (USA, Denmark, and the UK among others). I think it is clear that we do need to look beyond the traditional ‘windmills’ to best farm the deep seas.

To meet the legally binding agreement signed with the EU, the UK needs to further push the boundaries of wind farms to farther and deeper sites. At more than 50m water depth, floating wind turbines can be both more technically feasible and economically more viable than the fixed-to-seabed counterparts. As Statoil set about building the world’s first floating wind farm off the coast of Scotland, the UK will set another record in wind power.