It is wise to start by welcoming the new cohort 2021 to the Renewable Energy Marine Structures (REMS) Centre for Doctoral Training and wish them loads of fun and success in their future research. The week of 18 September was a particularly eventful one for the REMS students. It was a week of conferences, where both the annual REMS and the EAWE conferences were organised at Cranfield University. The sharing of knowledge and passions was demonstrated through various presentations which enabled a unique network to be established between both researchers and industry representatives. That said, two REMS students had to leave the conference quite briskly as a result of their deployment for a field experiment! Those two students are myself, Waseem Khodabux, and Paul Causon. In the scope of our doctorate we are analysing the marine growth effects and pitting corrosion on wind turbine foundation.

The weather displayed a certain kindness on those autumnal days of the 19 and 20 September 2017. When such a small window of opportunity appears, it does make sense to take a leap. The van was booked waiting for the keys to be collected at the main reception for our adventure to begin. The destination was Bridlington, also known as the lobster capital of Britain and which eventually has also transformed into a major port for offshore wind related projects due to its proximity to various windfarms on the east coast. In that area, quite a few windfarms going through different technological iterations from Round one to three have been installed. The colossal Dogger Bank also forms part of that cluster of offshore structures populating the seas around that region. The anchors, plates, frames, ropes, cable ties and spacer were all loaded and it was time to hit the road. It turned out to be quite an impressive experience where Paul was describing the various hurdles that would have to be overcome once we were on the deployment boat. During the journey to Bridlington a plan was devised. When we reached the hotel we smiled. It had a disco ball and it seemed the more mature generation were out partying in droves in the hotel. Unfortunately we could not join the fun as there was work to do; instead we hit the road again to Tesco to gather some essentials for trial the next day.

It was already late by the time we returned to the hotel. We jumped into our beds and got up early at around 4am and directed ourselves to the quay. The boat was a fishing one, sporting a crane of 500kg lift capacity at the rear of it. We were welcomed by a small but experienced crew of researchers and the captain, we loaded the experiment stuff and had a safety briefing by the captain of the boat. 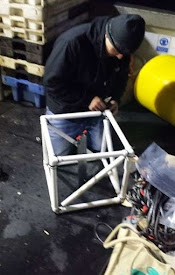 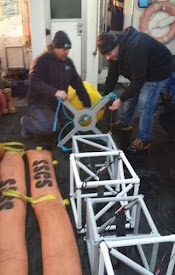 Paul busy assembling the coupons and fine tuning the tying

We set off and as soon as we got familiar with the rocking motion of the waves we set out to assemble the experiment. It involved the delicate task of tying the frames to the coupons and the buoys. A lot of rope cutting and cable ties tightening was needed but finally the task was complete. It was time to deploy the experiment. Moment of truth! The crane buzzed into life and the hook was hoisted down. We retreated to the safety zone. There was the firm grip of the hook to the anchor and the operator manipulated the levers and soon the whole assembly was on the move. The anchor was released in the water first and seconds later, the whole assembly was sinking in the depth of the ocean. This was it, an experience to remember and cherish for a very long time. We cannot wait to go back for the full deployment but before then we have to wait for a weather window. 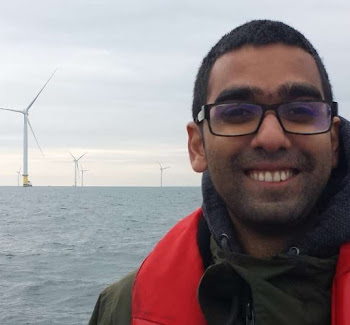 Anchors going in the water and Waseem posing

Next Post
Sourcing GDP and GVA data for countries