Homepage / A sit down with Chris Sansom

A sit down with Chris Sansom 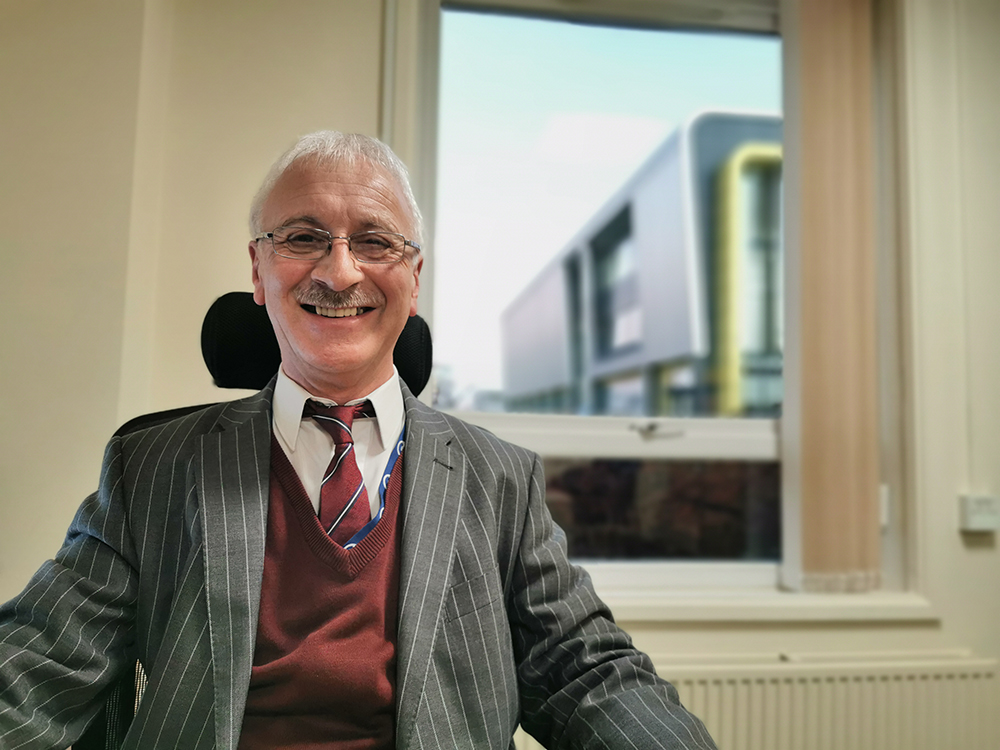 How long have you been at Cranfield?

I started life at Cranfield 12 years ago in the Precision Engineering Institute just as a new MSc was being set up. I spent most of my working life in research labs, but always in industry. I did some academic work during that time – working as a tutor for nearly 30 years on and off, including some guest lectures at Cranfield. With Cranfield’s close links to industry, the contacts I had made when lecturing and it’s purely postgraduate environment it was quite a seamless transition for me.

How did you become involved in concentrating solar power?

My background in industry was always heat and light. So I guess I was always going to somehow end up in at least one of those areas. I became involved in renewable energy when I was working with machine tools in precision engineering. I got interested in harvesting waste heat – about 20% of the energy goes into the cutting, grinding or milling process and the other 80% is lost as heat. So I thought we could perhaps do something with that waste heat. Waste heat harvesting took me very quickly into thermal energy, and then concentrating solar energy.

Has interest in renewable energy changed in the time you have been involved in it?

I think anyone working in science and engineering today is interested in renewables. It’s kind of everywhere – it’s in the news a lot, and even school kids are talking about it, which is fantastic. Smart houses, smart grids, local heat networks, electric cars, even electric aircraft – all part of a big picture, and that picture is climate change. I think I’m very lucky and very fortunate to be here at this time working in renewable energy, when the world is going through this transitional phase away from fossil fuels. We have a wonderful opportunity in the next 40 years to influence change. People often say “I became a scientist to change the world”, well you really can at this time, the opportunity has never been greater.

What do you like most about working at Cranfield?

I’ve worked for big multinational companies and small companies alike, and even worked for Amazon as operations manager for two years, running the night shift where I learnt very fast to make quick decisions! Of all the jobs though, Cranfield is the best job I’ve ever had – I love it, truthfully. If you have a great idea, you can set your own research theme that, provided you can bring in funding to support it, and you’re providing education and benefitting industry then you are fully supported. It was much more constrained when I worked in industry. Job freedom and the excitement of exploring new ideas is a wonderful thing – Cranfield gives me the chance to do something exciting every day.

What does a typical day at Cranfield look like for you?

I don’t deal very well with humdrum 9 to 5. At Cranfield I get the opportunity to travel a lot, which I enjoy – meeting new people and visiting interesting locations, talking with companies about projects, challenges or opportunities for our students. On another day I will maybe write an academic paper for two hours, or deliver a lecture – so there’s a great deal of variability in my job.

So what’s the most exciting thing you’re working on at the moment?

Well, it is on the solar energy front and the water-energy nexus – desalination in particular. In places like the Middle East – we’re working in Jordan, Saudi Arabia and in India where there are huge drinking water problems, and provision of water for agriculture. So we’re involved with two UK companies in trying to desalinate seawater in the most cost-effective way using thermal energy, and in smaller scale plants than the traditional huge, costly plants – that’s very exciting. It’s exciting because the technology is new, it’s different and you do feel like you are making a difference to people’s lives. For example we made a small, mobile desalination unit using plastic lenses for deployment in Jordan and Palestine designed to keep someone alive in a disaster zone refugee camp. Imagine that, using science to save someone’s life, isn’t that wonderful?

PV panels have become really cheap to manufacture, and generating electricity from PV panels has become more cost effective than fossil fuels thanks to economies of scale. However, although creating electricity using PV is really simple, storing that electricity is less straightforward. Storing heat generated from CSP on the other hand is much easier. It is about a quarter of the cost to store the same amount of heat as it is to store the same amount of electricity. Electricity storage means batteries – to store something like half a gigawatt Kwh which equates to one of my CSP plants, would require filling something like Wembley Stadium with batteries. Storing the same amount of heat would require something like a petrochemical drum (20-30m diameter), so much, much smaller. In addition, PV panels stop working when it gets dark, whereas a CSP plant can run for 24 hours a day, such as La Africana CSP plant we’re working on as part of the SOLWARIS/WASCOP project.

Does the Centre for Renewable Energy Systems work in other areas of renewable energy?

We have a long history of working with offshore wind, which is an area we continue to play a large and active role in research and development, looking at durability, fatigue and failure modes of offshore steel structures. Exploring maintenance and servicing methods, and how you might improve what, can be an expensive business. If something goes wrong with an offshore wind turbine it can cost somewhere in the region of a million pounds to sort that out. It’s not something you do unless you need to, and you do a few at a time to try and reduce costs. That’s why when you look at offshore wind farms and you sometimes see a number of the turbines not working, it’s because they are maybe faulty, so switched off to minimise further damage. Equally, some of the turbines are switched off when they are not required. As mentioned earlier, generating electricity is straightforward and relatively cheap, but storing that energy is less straightforward. If a wind farm is producing more energy than needed, then turbines are switched off. So one of our main activities with offshore wind revolves around how to monitor, maintain predict failure in these structures in the most efficient and cost-effective way.

We also work with wave and tidal – which lags behind wind and solar power in terms of maturity, and has had less in terms of investment, which is a shame as they also have their place in provision of energy and power. The UK for example, is a small island, surrounded by waves and tides, so provides a great opportunity for developing more efficient and effective turbine technology. At Cranfield we have great facilities and extensive expertise in turbine modelling and testing, which leads into things like mainstream hydro electricity generated by things such as dams – a great, predictable and controllable source of energy, and one used very successfully in places like Africa for example. It’s essentially stored potential energy, so a great resource for maybe cup final day or when you know something is going to happen to cause a spike in demand.

What would you consider the main challenge for renewables?

I think in the past, fossil fuels have provided a stable base load when facilities would just run all the time. Energy provision is a lot more complex now, and renewables in their various forms provide strengths in certain areas, but all are somewhat intermittent, perhaps with the exception of biomass and tidal. So the key challenge is to provide stable, dependable and consistent energy provision by utilising all the strengths from each of the renewable energy technologies in a cost-effective, sustainable way that makes as little impact on the climate as possible. All power generation has some kind of impact on the planet, our job at Cranfield is to work with students, academia and industry to develop the technologies that minimise that impact, which is a hugely exciting prospect.

Professor Chris Sansom is a Fellow of the Higher Education Academy (FHEA); a Member of the International Solar Energy Society (ISES), and the sole UK representative on the EERA (European Energy Research Alliance) Joint Programme on CSP (Concentrating Solar Power). Chris is also a Six Sigma Black Belt practitioner and continues to lead on several CSP projects around the world, looking at reducing water consumption.