Homepage / What happens after your EUREKA moment?

What happens after your EUREKA moment? 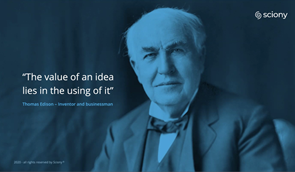 On Wednesday 20 January the Design Thinking MDes students attended a webinar where they were able to hear from representatives from Sciony as part of their Creative Enterprise and Entrepreneurship module.

Sciony started in 2019 and is based in London, their objective is to address the challenges that inventors and innovators face and support them through the process from ideation to public release.

The webinar started with Georg Roth, Founder and Director of Sciony, talking about the history of the company and how they got to the idea and the messages behind it. He went on to explain how they have built this idea into a global innovation ecosystem and their vision for the company’s future.

Georg spoke to the MDes students about the challenge’s inventors face and how 90% of inventions or start-ups fail. This is one of Sciony’s main aim, to lower this percentage and support inventors in the process from ideation to commercialisation.

The main reasons why there is such a high percentage of failing inventions could be for a range of reasons such as:

He continued on to say that everyone has their dedicated expertise and that you might have a great idea about a product, but you just lack experience and knowledge on how to make a prototype, how to define a proper Intellectual strategy or how to engage with investors. Additionally, for those of us who didn’t study law, we wouldn’t really know the different, sometimes quite complicated, questions which need to be considered in in the patenting process. By working with Sciony, they can put you in contact with these experts so that inventors can trust and get the support they need to make their ideas a reality.

Dr Trung Hieu Tran, Lecturer in Data Analytics and lead on the Creative Enterprise and Entrepreneurship module, ended the lecture by thanking Sciony for their interesting presentation and how the topics covered were very useful to students and academics at Cranfield University and how they now knew about the tools available to help them to commercialise their ideas. He went on to mention that the students over the last few weeks had been learning the theory of generating new ideas and bringing them to the stage of commercialisation. He continued to say that Sciony has a global platform to make what the students learn into a reality which researchers at Cranfield also have an opportunity to commercialise their ideas and research.

We hope that in the near future we will have a collaborative project where Cranfield’s Centre for Competitive Creative Design (C4D) will be able to work with Sciony again!

Thank you to Sciony for presenting to the Design Thinking MDes students it was a great session that was enjoyed by all!