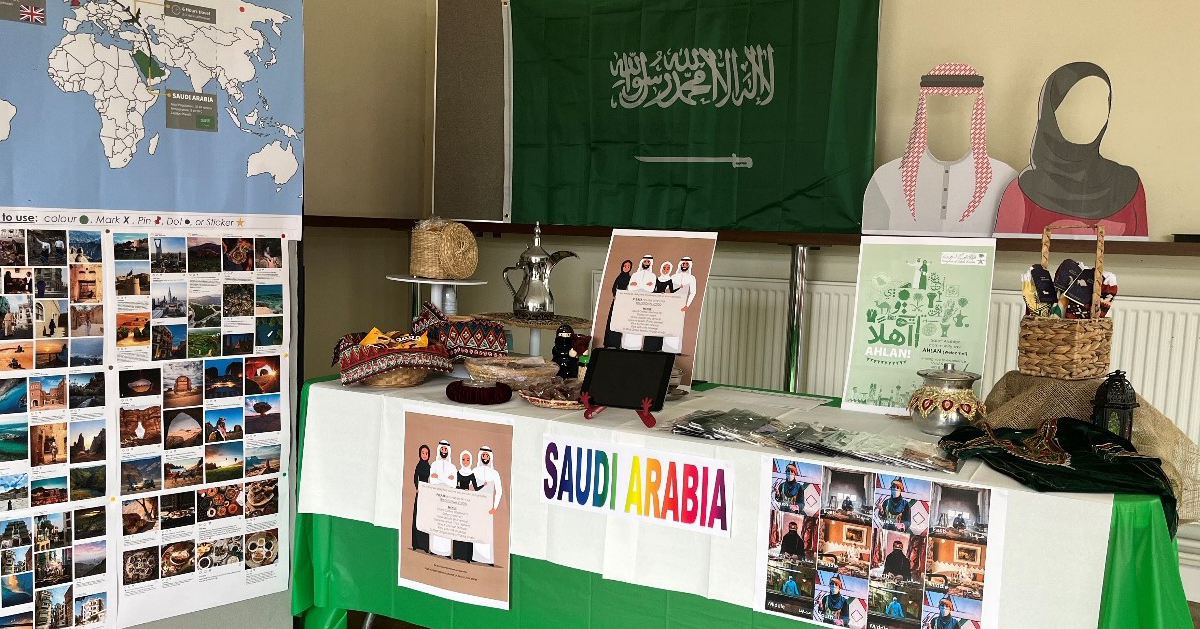 Narratives are what we create for ourselves by tracing the threads of the past and present for mapping out the future. It is all about stories of who we are, who we were yesterday and what culture we come to form. Through narrative, we can express ourselves, our identities, and our lives by mapping out our stories. We can experience creativity and healing, connect with others, or immerse ourselves.

As a PhD student at the Centre for Competitive Creative Design (C4D), and academic lecturer in design, I have applied design thinking to express my country’s narrative journeys and cultural value through the visual narrative as part of the international food fest day hosted by Cranfield University, CSA Bar. The participants were from over ten countries, and each was allocated a table and flag. Time was specified as 2 hours from 4 to 6 pm.

For most Saudis, entertaining guests with food and Arabic coffee is a passion, a time-honoured tradition, and a mini celebration. So I was trying to design the corner to reflect this experience by giving the visitor a narrative experience involving the Saudi Arabian cultural, emotional, sensorial and physical experience and not only through food.

I first started by working on the physical experience to stimulate the tactile. I laid out the table with some traditional items that present the country’s nature, varying from the wicker basket to metal and earth utensils. I have introduced the lantern (fanoos), handmade lamps used by people in the Middle East to light their homes, built to shield the candles from the wind and later become a festive piece; every country has unique traditions based on its culture and heritage. I have also presented colourful clothing and shiny objects with various ornament styles.

Food choices were carefully selected to go with the narrative flow, starting with Saudi Coffee (Qahwa) and three types of dates that shape the richest ingredients of the Saudi culture for hosting and welcoming the guest. Coffee was served by pouring it from the Arabic Coffee pot (Dallah) into a tiny handleless cup called a (Finjal) only filled halfway, which is part of the cultural norm that expresses the hospitality to refill the guests two or three more times. Also, Date biscuits (Ma’amoul) and Sesame sweets (Tahini Halwa) were served along with coffee. 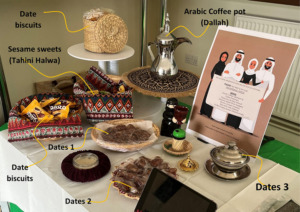 The main dish (Kabsah) was served as one of the most popular cuisines in Saudi Arabia and is commonly regarded as a national dish. It is an Arab one-pot dish of mixed Rice and chicken or/ meat with a range of spices. The name translated from Arabic means pressed, derived from how it is cooked. 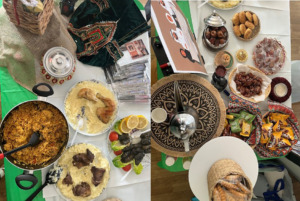 The combination aroma of the food and coffee selection has made the olfactory experience for visitors reflect the smell found in every Saudi Arabian house or events hall. Also, the banging sounds of the utensils and Arabian music played in the background have created an auditory experience. However, the visual experience was the main engine that motivated the experience. I have used different media to present the intangible culture. I have created a set of posters in different sizes and shapes along with interactive activities. The main poster is meant to illustrate the location of Saudi Arabia and the United Kingdom on the world map and the distance between the two countries with a simple comparison of the basic facts regarding population, weather, and capital city. This poster also asks the visitors to indicate their country on the map using small red round dot stickers. 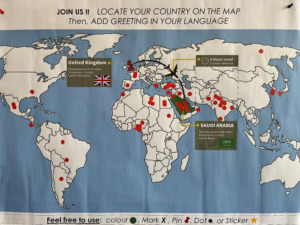 Three other small posters were planned to go along with the design flow of the corner. In the first one, I used the graphical figures of a group of Saudis in their Saudi Arabian costumes welcoming and presenting the food menu. Each meal was written in both pronunciations English and Arabic. The second poster greeted the people with the Arabic greeting word (AHLAN), surrounded by clip-art vectors of the Saudi social and cultural figures and symbols. The third poster represented the different regions of Saudi Arabia in terms of people’s costumes, colour schemes and decoration style, which was also adopted for the gave-aways set that contained Face-mask and post-cards of the same style.

Also, to create the mental and emotional link and open the span for imagination, I have displayed different images of Saudi Arabia’s geography, food, and people, which build the physical context connection.

Finally, to impact the visitors’ memory, making it a more sentimental experience, I made a photo booth showing Saudi costumes of male and female figures outlined to fit the face. This allows visitors to have fun and interact by taking photos of their selves to post on social media. 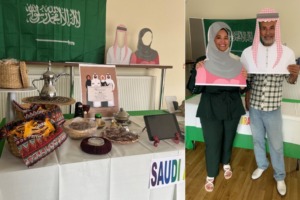 Overall, it was a successful experience as a positive interaction spotted around the Saudi table, where we met people from over 25 countries worldwide. People were keen to try the coffee and food, especially Kabsa; some made their remarks regarding the wholistic experience they got, others felt nostalgic, and others were interested in learning new information about Saudi Arabia. Complementary comments were registered, such as “rich culture”, “fragrant aroma”, “it feels holiday”, “it provoked my memory”, etc.