Time for the modern ‘Monuments Men’ as Iraq’s oldest Christian monastery is destroyed? 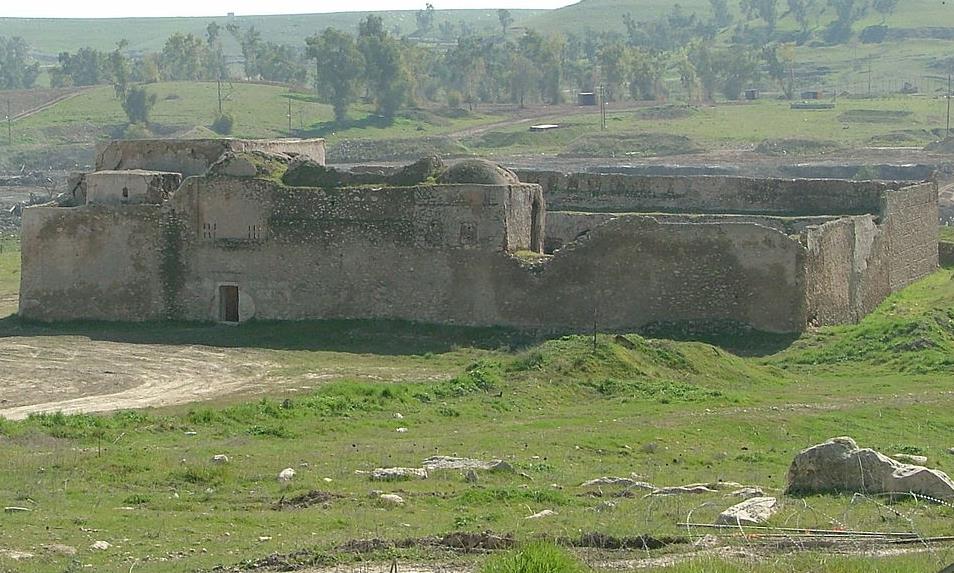 The news that the 1,400 year-old St Elijah’s Monastery, Iraq’s oldest Christian monastery, has been completely destroyed by the self-styled Islamic State has once again caused shock-waves throughout the world.

Satellite images show the site, known locally as Dair Mar Elia, has been completely levelled, perhaps as long ago as 2014.

Shocking images such as these and the destruction of other sites such as Palmyra in Syria have brought this particular aspect of the conflict to prominence. It is one of the triggers that has led to the UK government voicing its commitment to ratify the 1954 Hague Convention for the Protection of Cultural Property in the Event of Armed Conflict

This an important step forward which has been worked towards for many years by those in the field.

The Hague Convention aims to define important cultural property, be they monuments, museums, artefacts, libraries or any other objects of historical or archaeological interest, and facilitate their identification and protection in the event of a conflict. It led to the creation of the International Committee of the Blue Shield which aims loosely to provide similar protection to cultural sites that the Red Cross provides to people.  I am on the board of the UK National Committee of Blue Shield.

My background is in the forensic examination and analysis of artefacts and I have become increasingly interested in the fate of archaeological and historical sites, objects and museums in conflict zones.

This work involves liaison with the military and the development of research, training and education for armed forces in theatre and at home.

While the British commitment to ratify the treaty is heartening, the date when this might be done has not yet been given and there are still important campaigns to make sure that this matter is given the time it needs in Parliament, something that Blue Shield is at the forefront of.

The commitment to ratify is important in this time when the destruction of cultural property seems to have developed significantly. Even as short a time ago as the early 2000s, the main threat to museums, archaeological and historical sites and buildings was essentially accidental.

Sites were damaged in bombing attacks and shelling either because they were not known to be important, or because the attack went astray. Some sites were just in the wrong place as conflicts boiled around them.

However, the recent use of deliberate damage to sites as a political or terrorist weapon marks a clear departure from this. To see images of destruction at World Heritage Sites such as Palmyra and important museums such as Mosul is shocking.

It has resulted in bringing a sharp focus on the work of organisations like Blue Shield and a very real commitment by a diverse group of people and organisations to attempt to tackle this growing problem.

It is heartening to hear of the possibility that the British Army has become involved in this and is exploring the need to train a dedicated cadre of “Monuments Men”, perhaps based on the World War II model made famous by the book by Robert Edsel and more recently by the George Clooney film of the same name.

The British WWII officers in this role were mostly soldiers who in civilian life had been archaeologists, curators and historians. The foundation of the cadre led to them being recruited from other diverse areas of the military into which they had been drafted.

This model may well be used for the formation of the modern group, while academics might be recruited as reservists, some of whom as least might be liable to serve in the field.

However, perhaps even more than was the case in the past, the modern Monuments Men will have to have a very diverse skill set. Whilst the core of their work will continue to echo those of WWII – the protection of sites and recovery of objects – there are also opportunities to study and exploit the tracing of looted and smuggled antiquities.

They provide an important revenue source for terrorist groups and follow routes that might be used for other illicit material such as arms or drugs. These feed into the study of the activities of terrorist groups on the ground.

To gather this intelligence, the new unit will need to work with a wider range of Army units and other agencies. With the ever growing threat to cultural property their role in fostering a deeper co-operation from a wide range of departments will become increasingly necessary in improving our cultural protection capability and attempting to prevent further damage.

Is direct air capture going to save our industries and our planet?

We are about to experience the greatest disaster of our lives. Climate crisis is here. We can see the implications on daily lives – draughts, heat waves, uncertain weather. In my TEDx Talk, I ...

Defying expectations: Michelle’s MSc journey “I’ve always been really passionate about forensics,” remembers Cranfield scholarship student Michelle Holt. “When I was younger, I remember being stuck inside because of the weather, finding CSI on the ...