Homepage / Helping to revive wargaming in the Royal Navy

Helping to revive wargaming in the Royal Navy 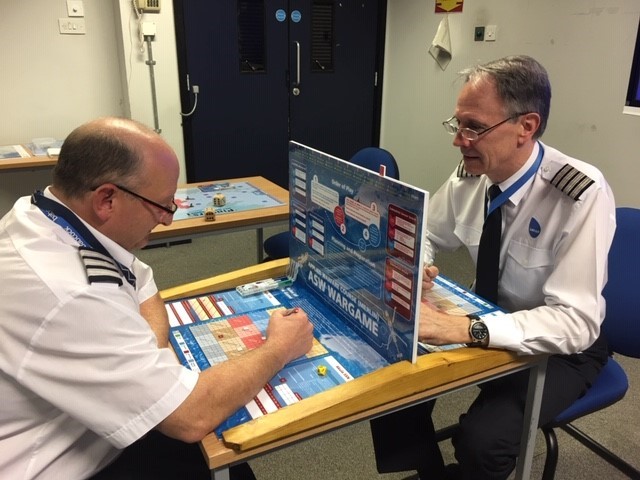 Wargaming played a vital role during World War Two in helping Royal Navy ship and submarine commanders to outthink their opponents in the Battle for the Atlantic and keep convoy supply routes to the UK open.

By simulating forces and movements in a specific setting, wargames can help to prepare military commanders for the kind of tactical and operational decisions they may need to make when fighting real conflicts.

There are lots of examples of where wargaming has helped in real world situations. Sticking to the maritime domain, there’s some evidence that Nelson explained his battle plan for Trafalgar to his captains with a form of wargame.

More recently, the Western Approaches Training Unit was established in 1943 to help win the Battle of the Atlantic. The wargame floor was set up in Liverpool and convoy captains practised manoeuvres to defeat German u-boats. Even the advent of homing torpedoes was assessed during these wargames and tactics developed to overcome the new technology. The US Navy also used wargaming a lot in the war in the Pacific during WW2.

As part of my ‘day-job’ as a helicopter simulator instructor at RNAS Culdrose in Cornwall, I am now using knowledge learnt at Cranfield to drive a wargaming revival in the Royal Navy.

When I did my Defence Simulation and Modelling MSc at Cranfield Defence and Security, I included the Wargaming and Combat Modelling module.

At the time (in 2006), the Royal Navy wasn’t using wargaming for training very much and the groundbreaking work that was done in 1943 at the Western Approaches Training Unit had been lost as a skill at unit level.

In 2017, the Development, Concepts and Doctrine Centre at Shrivenham published their Wargaming Handbook with a forward by Vice Chief of Defence Staff encouraging the MOD to regenerate the culture of wargaming.

The VCDS’s words came down the chain of command and reached the Royal Navy unit that I work for as a Reservist (Merlin Helicopter Force HQ) and I was asked to attend UK Defence Academy’s Introduction to Wargaming course, run as a one-off trial run. I was then asked to allocate some of my Reservist’s time to write a wargame for Merlin Helicopter Force to see how it could be used for training.

After some trial and error, help from Dstl wargamers, and attendance at the wargaming conference (Connections UK), the art and science of wargaming became part of my ‘day job’ as a simulator instructor working for Babcock. I ended up as the go-to person for designing wargames for training.

Babcock has been working on a new training course for the Royal Navy and I’ve embedded wargames into the syllabus, using various constructs to deliver training material. These include card games as simple as Snap to poker, to mini-wargames based on Battleships and Go to full Red Cell vs Blue Cell closed wargames.

Specific games are designed to meet the key learning points and enabling objectives, so when selecting methods and media during training design you pick the game mechanics best suited for the task.

A training task for knowledge acquisition could be as simple as a game based on Snap where you want visual recognition of something to be connected with a name or phrase. The game is supporting repetition, relevance and recency as an aid to memory development.

If you want to train the application of more abstract ideas – for example warfare tactics – then a wargame can be designed to provide an abstracted scenario to allow those tactics to be employed with reasonable outcomes. The game gives players an opportunity to see a time-compressed series of events unfold, reflect and then play again, maybe from the opposition’s point of view next time.

Wargame rules are developed to constrain the players by real-world factors. After defining the training need, the design process follows on with the maths and physics of the real world, the current equipment, or known human limitations. The rules encompass those ‘facts’ and then use game mechanics – turn taking, probability assessment with dice, look-up tables, random chance cards, and others, to make the game live.

The opposing player is essential – the enemy gets a vote and adds more unplanned events that have to be reacted to. Computer games are good where real-world equipment interfaces need to be trained, but artificial intelligence isn’t as challenging or surprising as a human being, and the debrief is so much more enlightening when you can talk to the opposition afterwards.

The wargaming revival in the MOD is underway, regenerating a hard-won skill from some of the Royal Navy’s darkest days and delivering engaging, meaningful training to a new generation of anti-submarine warfare specialists.