Homepage / Gaming for defence and security

Gaming for defence and security 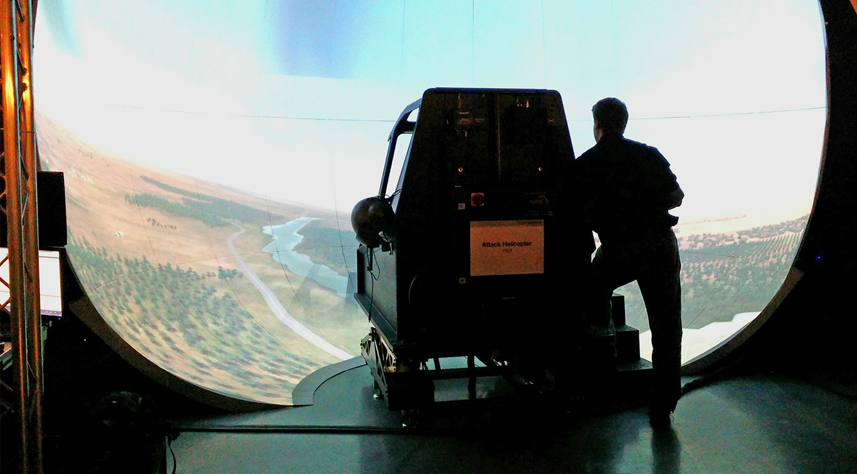 At first glance, some visitors to our Simulation and Synthetic Environment Laboratory (SSEL) in the Centre for Simulation and Analytics at Cranfield Defence and Security, Shrivenham, think we play a lot of computer games.

Along with the simulators, the SSEL – which has existed for over 25 years now – seeks to demonstrate a wide spectrum of simulation types and applications, and the different blends of technology available for training, engineering and analysis, all of which are used to support the educational activities in defence modelling and simulation, from short courses to postgraduate programmes. The main focus is at the battlespace level, rather than at the engineering level.

Along with a reconfigurable space comprising approximately 150 desktop PCs, we also use around £30 million of software donated by industry, and defence departments around the world – something which is only achievable due to our unique position with the Defence Academy’s Information Warfare Group and 35-plus years of relationships built between Cranfield staff and their military counterparts.

We use the equipment to create different kinds of simulations and simulators, some of which use gaming technology and commercial off-the-shelf applications and hardware. One of them even uses a seat from a JCB digger!

A race car simulator demonstrates what can be done with a standard high-end gaming PC and three HD screens connected up to a gaming steering wheel and seat.

Another simulator, currently configured to be a Tornado aircraft, has four PCs and four screens synchronised, with one of the screens lying flat, directly in front of the ‘pilot’, to show the inside cockpit view. The three ‘out-of-the-window’ view PCs are linked to this ‘cockpit’ PC and, using a network, synchronise their views to the movements of the pilot flying the cockpit PC.

Students are able to use this simulator and then walk across to a real Tornado aircraft, which now sits in the Technology School, and compare the simulation to the view from the real cockpit.

Continuing along the spectrum of simulator types, the attack helicopter simulator has two cockpits which were relocated to Shrivenham by the MOD when they were going to be disposed of at the end of the project for which they were originally created – the SSEL team are masters of making the best use of hardware that would otherwise be disposed of. With a similar aim to show what can be achieved using mainstream off-the-shelf equipment, a large curved screen has images from eight standard home cinema projectors displayed on it. The clever part is the software that blends the images from the different projectors together, so the user has a seamless view of the airspace and ground around them.

This simulator was developed as a ‘fight simulator’ rather than a ‘flight simulator’ and illustrates what might be used to train crews who already know how to fly, but need to practice fighting as part of a wider combined or joint team with other forces.

We don’t use simulators to train people to fly aircraft specifically, but our work does feed into training through the development and creation of the simulators. We ‘train the trainers’, with the hope that, by showing them the art of the possible, with a wide range of simulation systems at a various levels of cost and fidelity, they can adapt and improve how and what they train.

Other kinds of simulation are designed to enable members of the Armed Forces to practise working in a particular environment, or make use of motion detection to train physical movements, such as the hand signals required to guide a helicopter in to land on an aircraft carrier.

Some simulations can also help with research in other ways. A shooting simulation with a simulated weapon instrumented with a laser could be used to practice hitting targets and avoiding hostages, and aside from improving shooting skills, has also been used to plan trials of body armour, for example.

We work to educate students who are planning and developing the simulators of the future. One of our current projects, via an MSc student thesis, is exploring how to train drone pilots and looking at the kind of simulators which may be used in that, showing that, the course, students and staff, are involved, not just in the art of the possible, but can have direct input into the future of simulation use across the MOD.