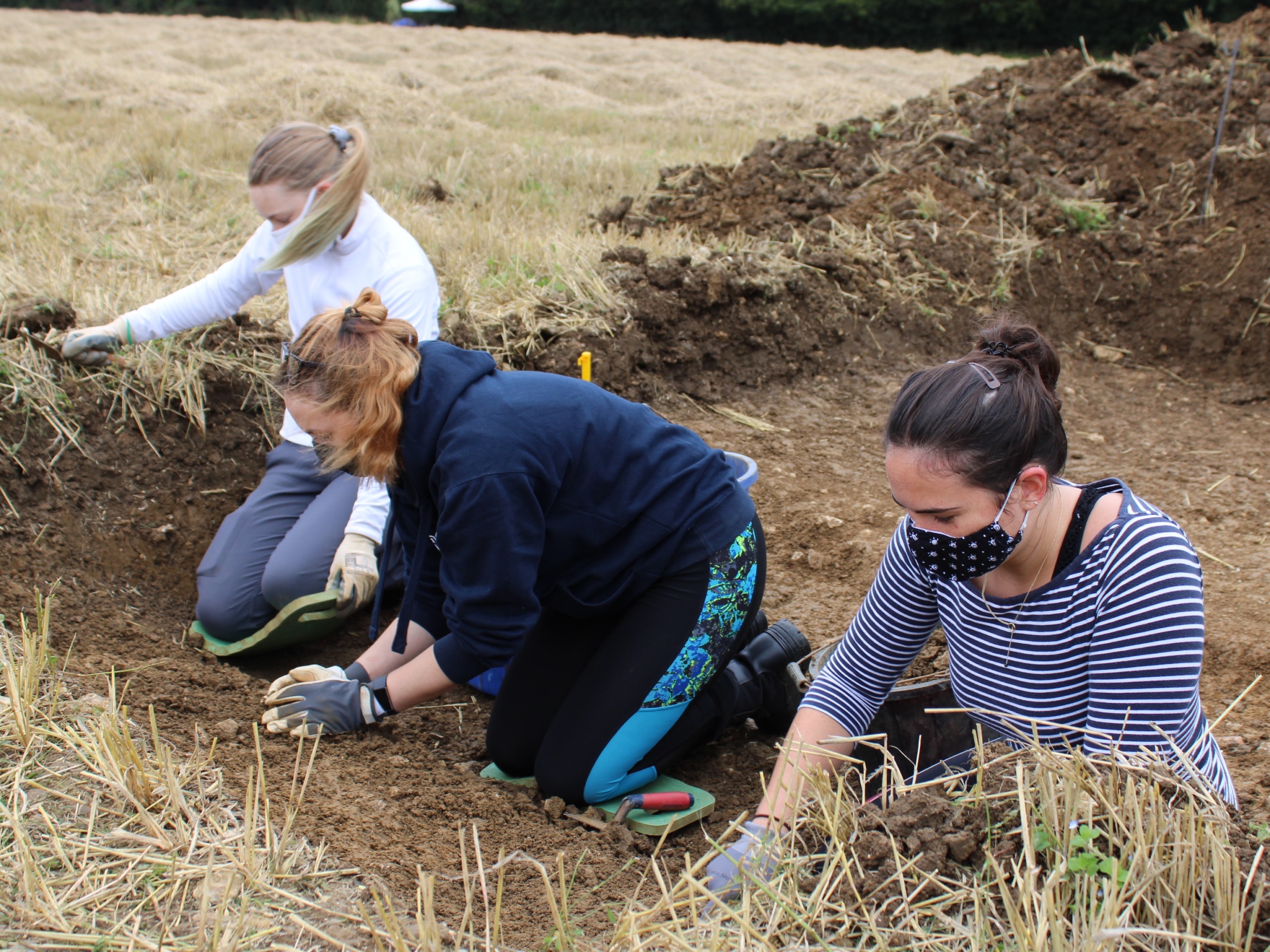 The quiet Wiltshire town of Corsham has been part of hundreds of years of British history, whether it be a centre of agriculture or the medieval wool trade, saw an English Civil War battle nearby, or more recently a southern based training, administration and aircraft engine manufacturing camp in the first and second World Wars for the British Army and housed the underground Cold-War era Ministry of Defence Central Government War Headquarters (CGWHQ).

Corsham has recorded location since the Saxon-era, and with over a thousand years of British history hidden, it is a perfect location for discovering lost locations and investigating the landscape that the town originally known as ‘Cosseham’ as written in the 1086 Domesday Book was built on.

Dr David Errickson, Lecturer on the Forensic Archaeology and Anthropology MSc has led a team of students, both current and upcoming, plus volunteers and experts in field as they focused on discovering theorised Roman activity that had been scouted using aerial photo graphs, geophysical prospection, and surface changes. The team would collectively work on trying to uncover whether the location was indeed the site of a former Roman era residence, or if the research into the location would outline different periods in British history.

The field selected was on the grounds of a sixteenth century farmhouse and subsequent farmland, and given the opportunity to explore the area gave the team currently working on the Practical Archaeological Excavation module a good site for some potentially strong finds and research.

The aim of the module is to enhance students’ knowledge in the planning and research of the dig-site, how to use methods and tools to locate and organise suitable excavation sites, recover and analyse any found items and the communication of the excavation in analytical detail.
While the location was aiming for evidence of Roman occupation, the five day dig had yet to find evidence of roman items at the half way stage. However, two of the three opened trenches had uncovered walls and small items that were of medieval dating.

The largest of the trenches was a 25 metre long excavation that managed to find not only walls, but post holes (for potential supports or awnings) and a medium sized fire pit. The decolourisation of the clay in comparison to the surrounding sediment, and the placement of outlying stones and rocks suggested that the fireplace may have been part of a larger building that the small section of wall may have yet uncovered.

Much to the relief of the team, the discovery of pottery sherds that dated from the thirteenth and fourteenth century due to its composition and the green/yellow glaze colouring kept the team inspired to keep looking for further clues as to the walls and internal surfaces they were slowly exposing.

The team on site were split into two teams with two trenches spaced apart by around 100 metres, this along with a geophysics survey allowed them to research two area’s that would not be inter connected and find out if the aerial photography of the site was correct in its suggestion of a former homestead.

Dr David Errickson said about the nature of the dig and the outcome of the week’s work in Corsham.

“We came to Corsham with two main questions. The first was to establish any evidence of past activity in this area and the second was to determine its date. Although the site warrants further investigation, there is clear evidence of occupation and farming practices pertaining to the medieval period, adding further to the understanding of this key town throughout history.”

Current student Alexanne Pilon was undertaking her final module before completing her Thesis, and after travelling from Canada had endured one period of quarantine on arrival to the UK.

On working with Dr Errickson and taking part in the module Alex said of her experience:

“He has had a great sense to work out what we need to do and what he needs to show me. He knows what I want to learn and he’s been really helpful to show me all the techniques and skills that go along with an excavation like this such as planning, excavating, drying out, trowelling and all the other parts of an exercise like this.

He’s been fantastic with keeping me in the loop with everything happening across both trenches, so although I might not know everything that is going on, he’s been really understanding to talk me through the important parts and make this module really worthwhile. It’s been a lot of fun getting to know everyone and with so many people with different experiences and meet people at different stages of their career in forensics, and it has helped build a connection and let me learn from each of them.”

The module runs once a year, and with the next one due to take place in May 2021 and with suitable sites already being planned for the future, which include an uncovered, but known Roman villa near Northampton.

The students and archaeologists that will get a chance to undertake this will once again have an exciting prospect of uncovering the history of the British Isles.

If you’d like to find out more about the module and its relevant Master’s along with Cranfield Forensic Institute courses you can visit the following pages: