“Water, water everywhere, nor any drop to drink!” – goes the Rhyme of the Ancient Mariner as his ship lies lost in the Doldrums upon a wide and vast ocean. I wonder what he would make of the vast oceans of data (or should I say, Data Lakes!) at our disposal these days – perhaps “Data, data everywhere, nor any context to think!”

Last time we introduced the idea that Performance Reporting is not Performance Management and started to examine 3 aspects of this little conundrum:

And, to introduce better understanding, we looked at annual UK GDP figures in their short-term historical context from 1993 – 2011, using extended-SPC techniques (where we are looking for anomalies, tends and patterns), and proposed that this gave far more understanding about how GDP was performing than the typical economic reporting of comparing the latest quarter with some other quarter.

Continuing with better understanding for this post, we said we’d also show how House Prices performed over some of this period – again reinforcing context, and potentially enabling a vestigial cause and effect picture to be developed… 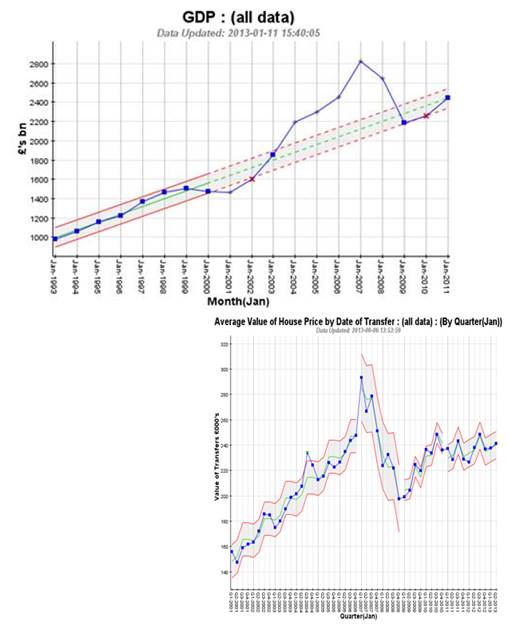 So during the 2001 – 2007 GDP boom, House Prices trended up (@ around circa £20,000 per year – and there is a seasonal pattern, talk to any estate agent about this, which makes the performance corridor wavy with humps in the middle of the year and troughs at the start/end of the year). In Q3 2004, there’s an anomaly in the House Price Chart that corresponds with the anomaly in Jan 2004 of GDP chart. There’s a massive change to the trend at the house-price peak in Q1 2007 where the trend changes to aggressively downwards. This corresponds to the Jan 2007 peak in GDP. In early 2009, house-prices resume an upwards trend around about the same time as GDP resumes its upwards trend.

Ideally, we’d like to see GDP and House Price data on the same timescales (e.g. both quarterly), and both for a longer period (say, 1993 – 2017), but it is not difficult to see how House Prices followed (and possibly drove to some extent through debt-fuelled domestic spend) GDP. Perhaps, if one was attempting to Performance Manage the economy, one would think about managing better how people re-mortgaged their houses based on upwards trending house-prices – or you could consume out of context data from the Land Registry which will inform you:

If we can agree that looking at data in the form of charts above gives better understanding, next time we will move on to looking at what is going to happen going forwards, and how we might want to Performance Manage rather than just report.