Homepage / Why Mrs May’s tactics are as likely as any to work in the current Brexit Chaos – and the Cynefin Framework!

Why Mrs May’s tactics are as likely as any to work in the current Brexit Chaos – and the Cynefin Framework!

Recently, the state of Parliament and the UK Government have been described as chaotic, amongst other things! Yet we see and hear from many individuals and various groups that we should be taking Simplistic Action which, as explained in previous blogs on this subject, will fail in a Chaotic State. The Cynefin Framework describes the Chaotic Domain where Act – Sense – Respond are most likely to bear fruit. That is “Take some informed Action, see if it works, if not try something different” in relatively rapid succession. While everyone else is just debating, Mrs May is the only one taking Action. The question is “Is Mrs May’s ‘something different’, different enough to get the result she wants” …

In previous blogs, we examined the Simple, Complicated and Complex Domains and provided examples of what techniques were best suited for each in order to generate success. This final part examines the Chaotic Domain. 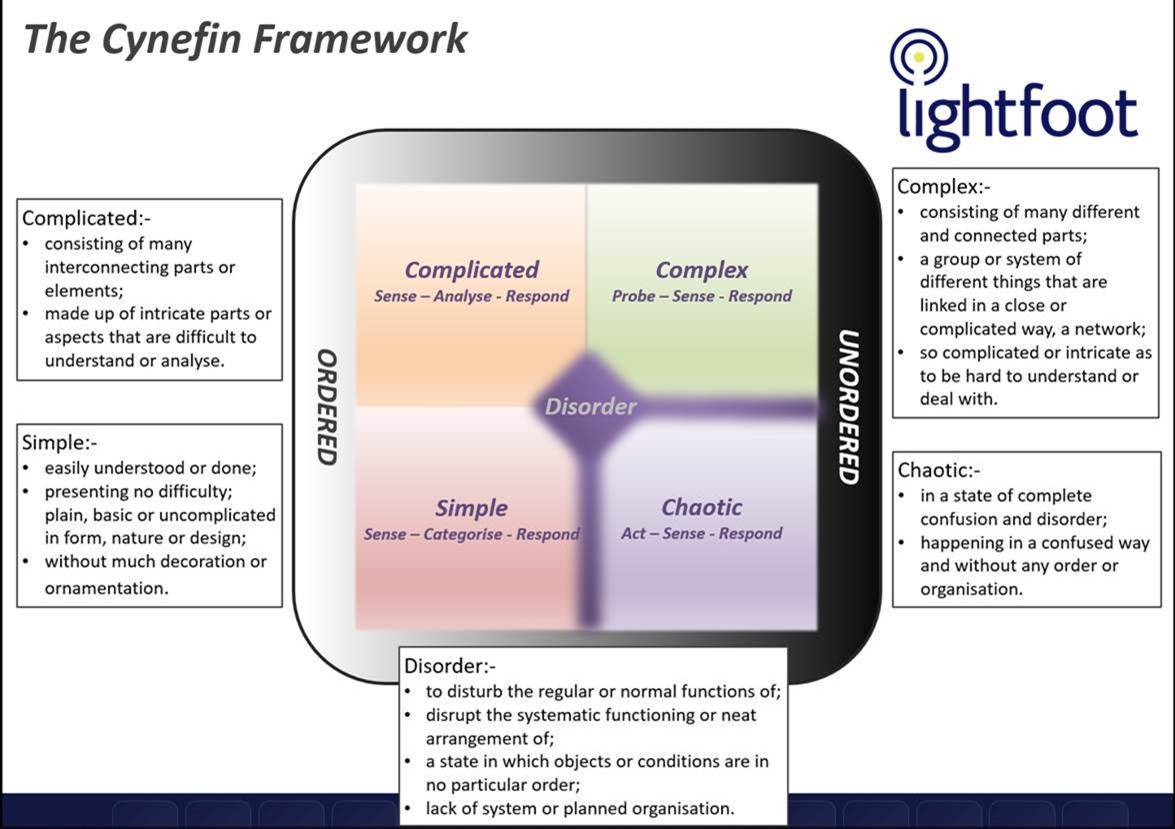 BTW, work on this Domain is very much work in progress. Is the use of this Domain useful? Feedback most welcome ….

Chaotic Domain (Volatility = Extremely High; Uncertainty = Extremely High; Complexity = Extremely High; Ambiguity = Extremely High): There is still some discussion about what this Domain really represents. It is work in progress – and our ideas and thoughts are still unfolding. However, readers might find these concepts useful – or perhaps you can help refine our ideas with some comments? First, it is possible for us to describe an Environment that is Chaotic, but so far we have never come across a System that is designed to be Chaotic!

Currently we envisage that any one of the Domains examined to date, could end up in a Chaotic state, but it is most likely that Complex Domains can deteriorate into a Chaotic state. This is when people are applying the wrong Techniques (appropriate to Simple or Complicated Domains) to get desired outcomes, and finding they get the desired result at one point in time, but repeating the same medicine doesn’t liberate the expected outcomes, so they try to apply the Simple/Complicated techniques again – even harder, faster, tougher!!

9/11: 11 September, 2001: The actual Environment – the period of attack, and the System response was in a Chaotic state (I don’t think we need to dramatize it – the Media and Film industry have done a good job of that). After some weeks and months, the whole world emerged changed – airports adopted significant additional security measures, we, as passengers were expected to arrive at airports much earlier due to these checks. GDP in a number of countries took a big hit. Security in “buildings of interest” suddenly appeared. Attitudes between “the West” and “the Muslim Community” changed. We emerged into a fundamentally changed Complex Domain.

Global Financial Crash: 15 September 2008: The collapse of Lehman Bros. In the lead up to this, during 2007 and the earlier part of 2008, the Banks, Regulators and Governments were all complicit in trying to keep a lid on it using Simple and Complicated Domain Techniques which progressively made things worse. We emerged (some may say, we have yet to emerge!) with Banking and Finance fundamentally changed with much more stringent capital requirements and persistent stress-testing of banks. Interest rates have been globally lower than ever before. Savers scrabble to make any growth in their capital. Borrowers have never had it so good (or have they?). Any guesses as to when this new Complex Domain will slip back into Disorder or even a Chaotic state?

And what a difference that 2.8% meant. This is a perfect example of a small change having a massive impact on everyone in the UK and beyond (including those who did not vote).

We have moved from a Complex Domain into a truly Chaotic Domain, with Downing Street, the Government, UK Parliament and to a large extent EU tangled up in something they’ve never had to face before. And UK Business is clearly suffering, GDP has taken a dive, the £ is volatile. I could go on. We will emerge into a new state – and things will be different!

And there are plenty of other Complex Environments and Systems that will tip into a Chaotic state while people are trying to apply Simple and Complicated Techniques in a Complex Domain!

So what Techniques do work in a Chaotic state? So far as we can tell, in such a state, there is no play-book. You have to Act (based on a rule-book), Sense the effect (i.e. make sure you can measure it), and if it’s the Outcome you want do a bit more, but recognise the effect could turn to a deterioration rapidly, and put it in the play-book.  This is essentially Boyd’s OODA Loop. Another Technique may be Brainstorming (ever seen the film Apollo 13?). We may look to innovative uses of Big Data and AI, but real, hard evidence they are delivering (apart from in some highly specific fields such as retail) so far is very difficult to come by. We’re still looking for additional Techniques, as well as evidence that they work. But we know what is served up for us from the Simple and Complicated Domains will be next to useless.

I hope these four blogs have been useful, your feedback is most welcome …