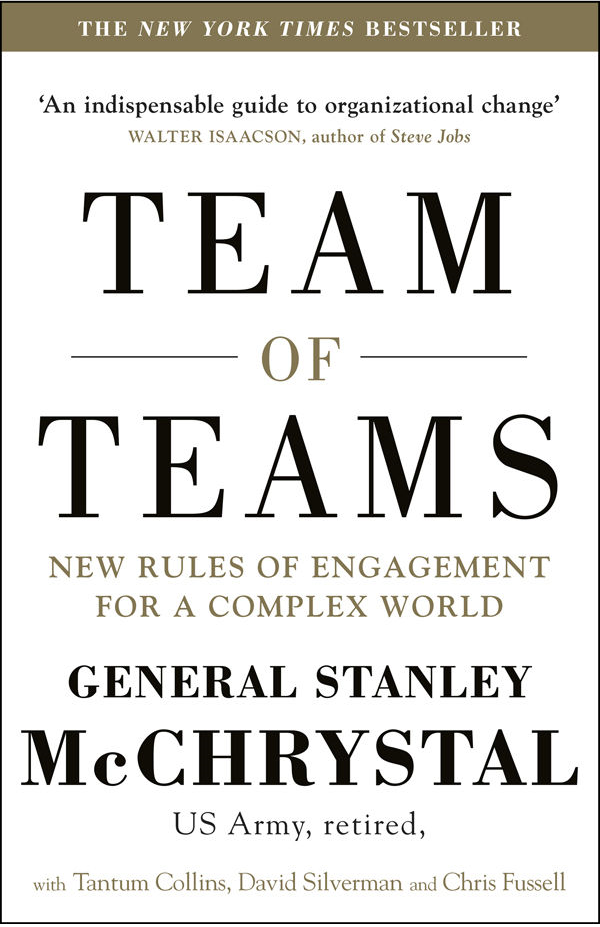 New Rules of Engagement for a Complex World

Business leaders and managers constantly seek to create, and sustain over time, successful and high performing organisations. In his book, McChrystal draws upon his experience of the war against Al Qaeda in Iraq (AQI). As leader of Joint Special Operations Command (JSOC) in this war, the Allied forces were badly losing despite being better funded, trained and equipped. He tells the story of how he learned about and developed the organisation to find and ultimately kill Abu Musab al-Zarqawi the leader of AQI at that time, effectively winning the campaign.

Within this review, some of the key topics covered are:

– Overview of the book

McCrystal’s second book focuses on his leadership of Joint Special Operations Command (JSOC) in Iraq. The Allied Forces were losing the campaign and McChrystal describes himself realising that the established practices of Command and Control from Scientific Management (Taylorism) were simply not enabling his force to deal with the agile and flat structures of the AQI terrorist network.

He identified that his own organisation was complex and, therefore, would not conform to the rigid established principles developed by Taylor from the 1880’s. The core principles of Taylorism rely on controlling the variables within a production environment, which can be possible within a factory. Within the Iraq environment however, predictability of outcomes is almost impossible with the variation in conditions, complexity of operations and speed of change. The result being the creation of complex (or nonlinear) relationships – meaning a small thing (such as one change of team member, or slight change on location) could have a large impact or none at all.

He recognised the work of IBM in developing the Cynefin Framework (See our previous blogs on the subject) to identify the difference between a complicated domain and a complex domain, and how they should be treated differently.

It was this conflict between complexity and the application of scientific management principles which were holding his force back, while AQI could move and regroup quicker whilst adapting, almost organically, as needed. Essentially, AQI were operating the principles of Mission Command (again see our previous blogs on the subject) better than the Allies and WINNING!

So McCrystal knew things had to transform in order to defeat AQI, but he writes:

‘Little of our transformation was planned. Few of the plans that we did develop unfolded as envisioned. Instead, we evolved in rapid iterations, changing—assessing—changing again’.

Their plan however did have guiding principles:

Have a Common Purpose – Know the mission: to disrupt and disable AQI

Empowered Execution – He stopped authorising deadly strikes (he added no value) empowering the task force, as long as the decisions weren’t immoral or illegal

Build Trust – Trust within Teams was great but, between teams needed development. McChrystal created highly skilled people as Liaison Officers working with other teams to improve connections and outcomes

Leader as a Gardener – Changing leadership from commanding to cultivating

The book was actually written by a team, but they chose to tell the story from McCrystal’s perspective making the story more personal and compelling. The additional authors were:

Tantum Collins – is a writer and researcher for McChrystal. Having studied for a BA in Global Affairs at Yale he also attended McChrystal’s Course on Leadership

Chris Fussell – is a Managing Partner at McChrystal Group, and the leader of the McChrystal Group Leadership Institute. A Former US Navy SEAL Officer and Aide-de-Camp to McChrystal during his final year leading JSOC. He also is the recognised author of One Mission (another account of McCrystal leading the war on AQI)

The main Deconstruct for organisations is to create teams within the hierarchy that have:

·      An Understanding of the Big Picture

In the book, McCrystal describes how organisations (including the military) have developed since the times of the industrial revolution – effectively around “planning and discipline”. This way of organising is attributed largely to Frederick Winslow Taylor (probably one of the world’s first recognised management consultants). He also recognises Taylor’s methods, although based on Purpose and Intent (as is Mission Command), are mainly focused around reductionism (methods which are highly prevalent in some industries even today).

Over the previous century, where the environment had not changed that quickly on or off the battlefield, these methods may have been appropriate. However, with the advent of the Iraq war, the game had changed fundamentally!

McCrystal still needed to be disciplined, with a plan/outcome, but now needed to be agile and innovative to deal with the Volatile, Uncertain, Complex and Ambiguous (VUCA) conditions within which his highly skilled teams were operating. He recognised that he was fighting against an organisation that had no manual or rules to violate other than to survive and win. This made the enemy incredibly adaptable.

McCrystal likens this to business today with large and highly structured organisations defending against small agile start-ups with flat organisational structures. Which reminds me of the saying “The big don’t eat the small, the fast eat the slow!”

His guiding principles helped shape JSOC to become agile and innovative, delivering significant increases in the number of operations aimed at disrupting and disabling large swathes of AQI.

Team of Teams references many well-known practices within industry, from recognising and improving performance to achieving a mission or a goal. These practices are underpinned by the 4 points of Deconstruct for an organisation: Purpose, Understanding, Authority and Trust. However, there is one key piece of published academic understanding that I believe was achieved unconsciously. Over the last number of years, we have been studying and incorporating the academic work of Luc Hoebeke on Human Based Activity Systems. This work details the importance of relationships and communication for humans delivering outcomes through a shared or distributed process. Hoebeke recognises the importance of the human linkages and the way they impact the commercial system. We believe results of this work are critically overlooked within many Transformation or Improvement projects conducted by most organisations today.

It can be viewed as a facsimile of the working of our own brain. Our brain is made up of a number of parts capable of working independently from each other. However, it is only when these parts behave as one do we really see an effective human being. This development occurs when parts of the brain learn to communicate in order to form habits and behaviours around the way we live our lives. Communication within the brain is commonly referred to as Neural Pathways formed through these habits and behaviours and pathways are strengthened through training and repetition. It is now commonly understood that it is possible to train the brain to reinforce good behaviours or habits and similarly re-train it to remove or reduce the effects of poor behaviours or habits.

Bring this thought back to our process delivery mechanism where the delivery teams are effectively parts of the brain, engineering the ‘Neural Pathways’ of the appropriate strength become a key deliverable for successful outcomes. Similarly, it becomes clear to see why reorganisations within companies result in reduced or poor performance – either permanently or at the very least while the human communication pathways heal / re-establish themselves.

Strong analogies can be drawn from what McCrystal was doing with the human based activities to achieve the mission against AQI. The ‘O&I’ established a mechanism to create these pathways, but it was the introduction of ‘Liaison Officers’ developing the critical communication pathways that gave McCrystal’s organisation the success he achieved in disrupting and disabling AQI

As a four star General, General McChrystal has a family history within the American military. His father was a Major General and Grandfather a Colonel. He graduated from West Point in 1976. His Wikipedia page includes much detail about his life, but through his books (My share of the task, Team of Teams and Leaders) the context of Leadership is deeply embedded throughout all his writings.