Homepage / Systems-Thinking – Making it work for you – Part 2

Systems-Thinking – Making it work for you – Part 2

“America first!”, says Donald Trump in his inauguration speech, exciting those who think this will create more jobs and strengthen the US economy. However, he doesn’t appear to understand that, in this context, the US is part of a wider “System” – a Global Trading System – and like it or not, there is an abundance of evidence that protectionism is ultimately damaging for economic growth. But then he (we?) is living in a post-factual world. For those where facts and evidence don’t matter, you can stop reading now…

Last week I posted the first of several blogs on Making Systems Thinking work for you., and introduced 5 key themes:

the first of which, a Joined-up System Purpose, we covered last week looking at, as an example, the Criminal Justice System (CJS).

This week, we’ll look at Systems in terms of Processes, since it is through Business Processes that organisations such as the Police, Banks, London Underground, Telecoms Suppliers etc. deliver their services. And we’re going to draw some lines in the sand that should only be crossed with eyes wide-open!

If we’re trying to improve the performance of a System which has a clear Purpose, it usually makes sense to understand how that System works in terms of these Business Processes. Each of these Processes themselves will probably consist of 4 or 5 Stages. And this is the first line in the sand! It is here where we have seen improvement projects being hijacked with the desire to process-map everything to the n-th degree! When this happens, you can end up with extensive volumes of detailed and convoluted diagrams that are absolutely accurate, but totally impenetrable.

The essence is in “opening up the black box” just enough here to understand where an issue might lie in a Process, and which Stage needs fixing (where it’s much more cost-effective to change a single Stage rather than change out a Process or the whole System). In our earlier blog (Book Review – Black Box Thinking, by Matthew Syed), he talks about “Minimum Viable Product”).

So we’re trying to understand the “Flow” of work or “item of value” through the System by making it visible enough as it travels through each Process and each Stage. And here’s another line in the sand! We are not talking about “workflow” in the sense used by purveyors of workflow systems. Almost exhaustively, these systems can be found wherever work gets processed – e.g. processing an insurance claim, opening a new bank account, preparation and bringing a criminal case to trial, processing a complaint against a police officer and so on. The real issue from a Systems-Thinking perspective is these workflow systems count activities, pieces of work etc., very well, so can spit out so-called efficiency or productivity figures ad-infinitum. Often as not, it takes quite a lot of effort to get out of them how effectively value-work is passing through the system, and with what level of quality etc. (perhaps another blog on this later this year!).

A further point to consider is that these Business Processes span multiple parts of the organisation, crossing (both inter- and intra-) organisational boundaries. The optimum way to visualise this is via so-called “Swim-lane” diagrams, an example (simple IT Help Desk) of which below: 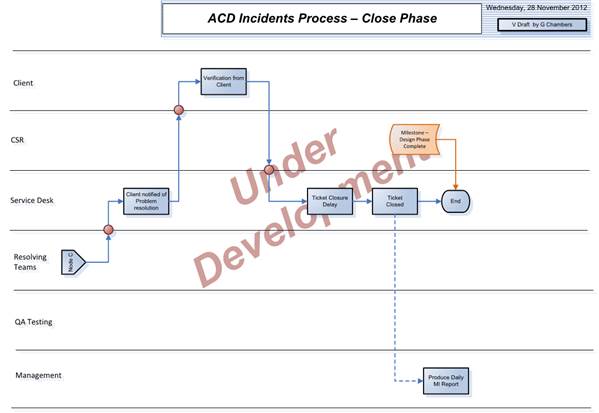 And here we come to another line in the sand! There are those organisations , blind to a Systems-Thinking view of the world, that carry our regular “re-orgs” which often take place to “save money” or “improve productivity” – these almost always break Business Processes, and move (and increase) cost elsewhere!

Flow of Work through the System

When we’ve expressed our business as a joined-up System, consisting of Business Processes (and Stages), and visualised the way the Processes and Stages cross organisational boundaries, and we measure things like to volumes of work that pass across these boundaries and the length of time the work resides within each Swim-lane, we can then start to see where problems occur. If the whole thing is an impenetrable black-box, then there is a tendency to ask the wrong questions, fix the wrong problems and waste precious resources and money! We have a model that simulates the Incident Management Process in Police where calls for assistance are automatically and randomly generated by the throw of 6-sided dice. Simply because of random Variation (you can throw anything between a 1 and a 6) some calls take a long time to process. Without understanding the Process, and the Flow through the Process – many organisations will ask “What is so special about that call that took so long?” Answering questions like this can consume large amounts of effort – all wasted because the answer is “Nothing”. It’s the Flow through the Process that’s the problem – and then identifying at which Stage and across which boundary the hold-up is occurring.

So what do you need to Measure and then Manage to make all this work? We’ll cover that in our final blog on this subject next week!