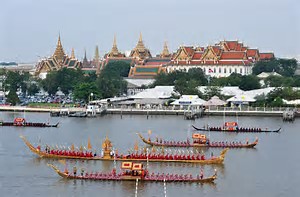 Listening to a discussion about Theresa May’s leadership style on this morning’s Today programme made me think about some of the organisations I have worked in – and also a story I heard whilst on holiday in Thailand.  One of the speakers was talking about the problems of surrounding yourself with like-minded people, essentially building a protective wall around yourself.

There is a story – probably true – that a Thai Queen and her daughter drowned when their royal boat capsized on the way to the Bang- Pa-In Royal Palace one summer. There were many witnesses to the accident who said it happened because people did not dare to touch the Queen – even to save her life – because it was a capital offence.

This is an extreme example, but I have worked in organisations where the top man or woman has created a culture of invincibility.  In some situations this works, notably for a short period in a crisis when decisions have to be made fast. But it does mean people lower down the organisation either won’t voice their dissenting opinions, offer better solutions or find ways to do what they feel is right anyway.

It seems to me that true courage is allowing dissenting voices to be heard and admitting you are sometimes wrong whilst still maintaining your integrity. It is not surrounding yourself with likeminded people to shield you from the rest of the world.