Homepage / Forecasting – Prediction is very difficult, especially if it’s about the future!

Forecasting – Prediction is very difficult, especially if it’s about the future!

Niels Bohr, the Nobel laureate in Physics and father of the atomic model, is quoted as saying, “Prediction is very difficult, especially if it’s about the future!” This quote serves as a warning of the importance of testing a forecasting model out-of-sample. It’s often easy to find a model that fits the past data well — perhaps too well! — but quite another matter to find a model that correctly identifies those features of the past data which will be replicated in the future.

So here’s the thing: in the private and public sector, we keep hearing senior executives talking about being more predictive — getting on the front-foot and being less reactive. Almost all of them fail to recognise that unless your business processes, their incoming demand and outgoing outcomes are not “In Control” (meaning in statistical control) then forecasting is worthless — a black art at best! Here’s an example of a process that is not In Control:

The above processes (there are 2 of them, with a change near the middle of the chart causing a “process break” between the first part of the process and the second part of the process) are not In Control. The chart has a large number of different types of signals, red x indicating unusually long delivery times, green x indicating unusually short delivery times, green  •   indicating sustained unusually short delivery times and red  •   indicating sustained unusually long delivery times. Using this data to forecast forwards will produce at best a range of between 80 and 200 (lower and upper red performance corridor guidelines on right part of chart), but because it’s not In Control, there will be occasions when these guidelines will be exceeded. This is because, as Niels Bohr says, the signals indicate that the process contains features that may or may not be replicated in the future.

Looking at a process that is In control: 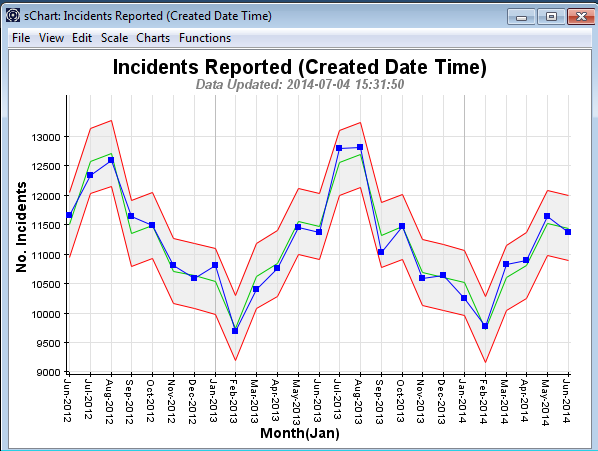 We can see that there are no signals and that the data is following a very strong seasonal pattern. This means the results are likely to be dominated by features of the past that will be replicated in the future. So we can confidently (but not with absolute certainty — there’s always risk, but in this case it is minimised by being In Control) predict what will happen in the future (unless we or the system we are examining make changes): 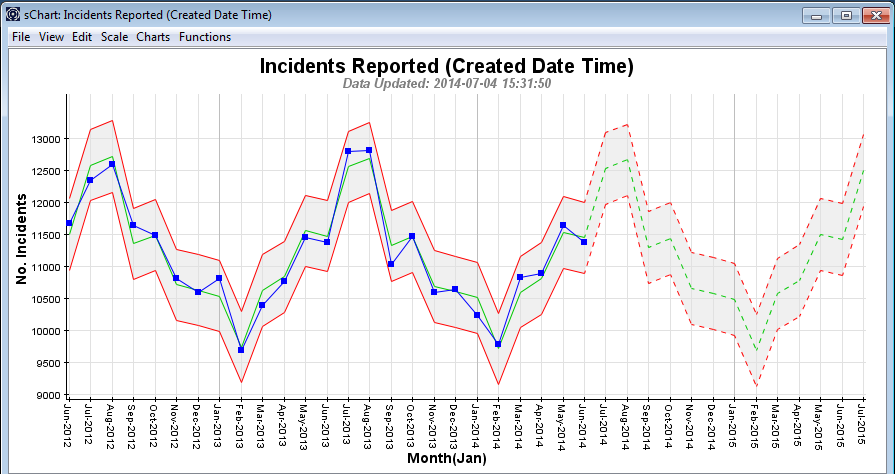 BUT, if a senior executive says, “I need you to be more precise, I need one number”, you’re up against another well-respected Physicist — Heisenberg and his Uncertainty Principle. The more precise one thing you measure, the fuzzier another becomes. So asking for a forecast which is a single number only (without a range of possible values), means that the probability of it actually occurring approaches zero! Or as Dilbert says, worthless!