Homepage / BBC News – Skating on the thin ice of a new report!

BBC News – Skating on the thin ice of a new report! 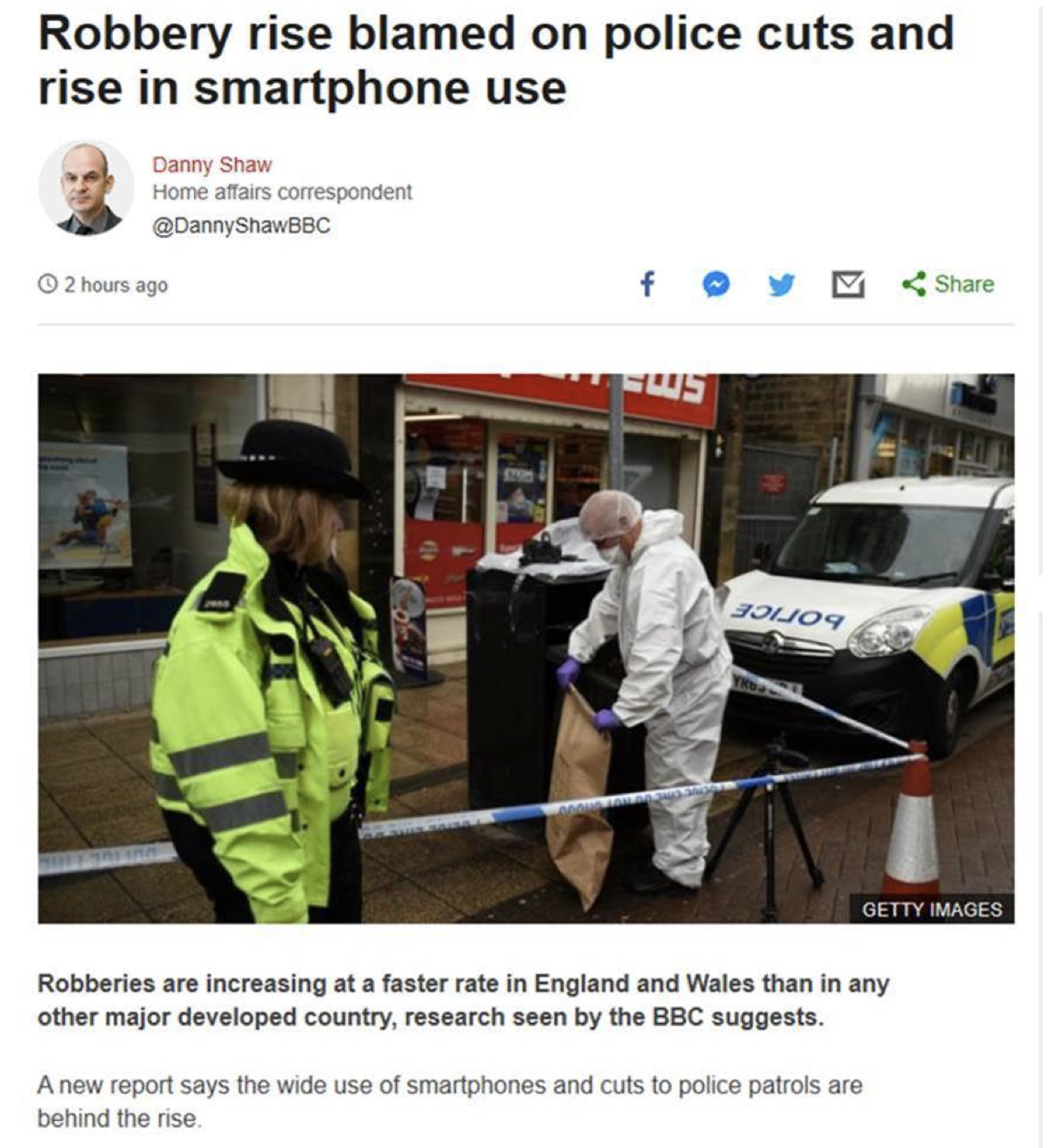 Here we go again – reporting at face value, out of context, on complex issues. Is robbery increasing any more today than, say, last year, 2 years ago, 3 years ago? How are robberies counted in any other developed country – you can be sure they are defined differently and measured differently around the world! And is any increase really due to smart phone take-up and / or cuts in police numbers?

Looking at robberies in England & Wales – the picture since 2011 looks like this (source data.police.uk) – just look at the patterns outlined by the upper and lower red guidelines, don’t get lost in the individual monthly results:

It shows that robbery was decreasing (seasonally) during the start of austerity, levelled out around 2015 and from around May 2016 began increasing at  rate of around 70 robberies per month. There was a small increase in the rate between March 2017 and January 2018 (run of red points), and, in fact, the latest available two months (June, July 2019) results show a possible reduction signal (two green x’s). And if you were to consider robberies in context with all crime reported, the correlation would be around 0.75 (chart not shown, but available on request). This strong correlation indicates that any pattern seen in the chart above is reflected in the all crime pattern. So there is something more systemic driving the pattern rather than anything specifically associated with robberies.

But let’s look at smart phone take-up – as usual, no one government department can use the same representation as any other, so we have the figures below from OFCOM.

Looking at the turquoise (as opposed to cyan – that’s the tablet take-up) graph, smart-phones really took off between 2011 and 2015 – the period while robberies in the previous chart were decreasing. So if smart-phones are behind the rise in robberies, it took the robbers quite a bit of time to cotton on to the fact that most people had smart-phones!

What about police numbers? Here’s another chart from the Home Office (different department, different timeframe – but hey-ho!)

We can see that since austerity kicked in starting 2010 – 2011, police numbers dropped rapidly until around 2015 – 2016 and since then, appears to be levelling out. Interestingly, while these numbers were dropping, the first chart shows robberies were decreasing too!

So either, it takes a long time for criminals to catch-on (but sometimes it appears they have a better handle on digital communications than most) or there’s something else at play!

Could it be anything to do with the way HMICFRS changes the way we count crimes on a regular basis perhaps?