Homepage / Satellite remote sensing can help you shop smart. But what else could it do?

Satellite remote sensing can help you shop smart. But what else could it do? 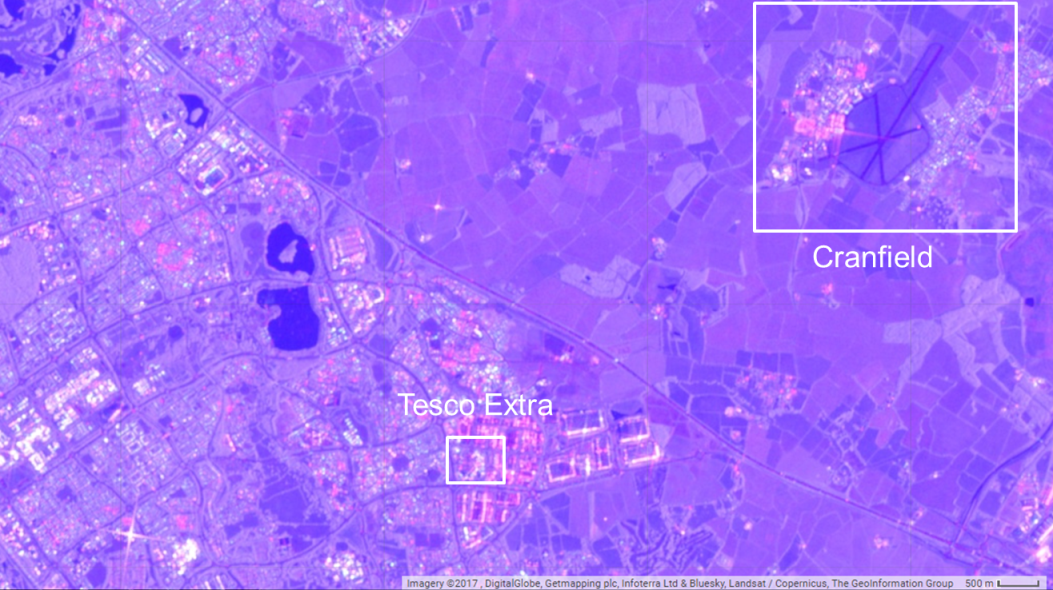 Do you usually do your shopping after work? If yes, then satellite remote sensing could be on your side, because it is now possible to work out how to miss the crowds.

The idea is simple: measure the presence of cars in the supermarket carpark. Let’s assume that you go shopping at the Tesco Extra in Milton Keynes, which is open 24h from Monday to Saturday and 10am-4pm on Sundays.

Two broad categories of remote sensing satellites exist that can help measure how many cars are parked; those that carry a multispectral camera and those that carry a radar instrument (such as the photo above). A multispectral camera is essentially a more expensive version of the camera in your phone; it records the sunlight reflected by the objects in the scene. Its main disadvantage is that it is sensitive to cloud, so the scene of interest (in this case a carpark) will not be visible on cloudy days, which are sadly all too common!

Radar works in a different way; it emits an electromagnetic wave and measures the reflections from objects. Put simply, it can see through clouds, day and night. Here, we use Sentinel-1, a radar satellite from the European Space Agency (ESA). Most of the radar satellites are on orbits that allow them to ‘image’ a given scene, either around 6am or around 6pm (dawn/dusk orbit). So we are able to look at shopping traffic only at these two times of the day. This is a bit limited but many people will shop for groceries after work, so the 6pm images are actually well timed.

However radar images can be hard to interpret because the interaction between the emitted electromagnetic wave and the scene can be complex. The diagram shows a simplified interpretation of our carpark. When the carpark is empty, the electromagnetic wave bounces off the surface, away from the radar, so that the reflection measured by the radar will be very small (dark image pixels). When there is a car, the electromagnetic wave bounces between the surface and the car, and is eventually reflected back in the direction of the radar which will record a strong reflection (bright image pixels). 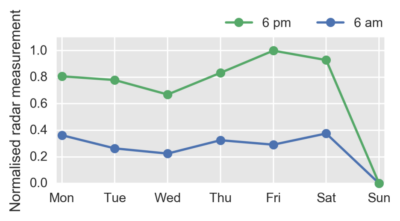 And we can get smarter still. Using Google Earth Engine, we can compute the average pixel value over the car park for all the images acquired since the beginning of the Sentinel-1 mission in April 2014, some 357 images (175 images at 6am, 182  at 6pm). The graph below shows the results after averaging the measurements for every day of the week and normalising by the radar values obtained for Sunday (when the store is closed and the car park almost empty). A value of 1 corresponds to the busiest car park, and 0 corresponds to the car park being empty – like on a Sunday. As expected, 6am is always less crowded than 6pm. But if you really want to go shopping after work, then Wednesday is your best option and you should avoid Friday. It seems people tend to shop at the beginning or at the end of the week.

Hopefully this is all making sense, but how do our results compare with Google’s data on popular times of public places? Google provides information on popular times and visit duration of most public places, based on anonymous location information recorded by smartphones. The graph below shows Google’s data at 6am and 6pm for our supermarket, however the data are only relative and do not tell how many people are actually in the store. 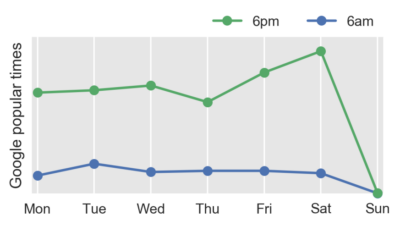 Data extracted from Google’s information on popular times for Tesco Extra. The data are related to the number of customers in the store.

This time, Thursday seems to be the best option for the 6pm shoppers, and Saturday is the worst day. This may be due to the fact that radar measurements are sensitive to the presence of cars in the car park, while Google records the number of smartphones in the supermarket. On Saturday, visitors are likely to include families where both parents and children are likely to have smartphones, while they arrive in one car. And of course the carpark may also be used by people going to other shops or restaurants nearby.

Google’s data are likely to be more reliable than the radar measurements (they are a more direct measure) and are not limited to 6am/pm only. Nonetheless, this example highlights one of the many capabilities of radar remote sensing.

So we could use radar and satellite technology to beat the crowds – all well and good in our hectic lives. But similar approaches could be used for more impactful applications, such as informing local administrations on car densities for improved traffic management, carpark utilisation and urban planning, and more generally for monitoring urbanisation at global scale.

And according to this 2017 United Nations report, the current world population of 7.6 billion is expected to reach 8.6 billion in 2030, and 9.8 billion in 2050. This population increase and the recent large movements of refugees contribute to making urbanisation a pressing global challenge. With the improved availability of high-resolution imagery and the development of tools for big data analysis, satellite remote sensing could now provide comprehensive, up-to-date, and spatially reference information to better appraise this challenge.

Satellite remote sensing is yet another tool at our disposal in helping to understand and manage the world around us. We can use it to save ourselves time at the checkout queue, or to facilitate the movement of refugees. But whatever we use it for, it’s a fascinating application that I believe will have far and wide reaching consequences in the years and decades ahead. But for now, it’s Wednesday afternoon so I’m off to get my groceries!