Homepage / Are we eating ourselves out of water?

Are we eating ourselves out of water? 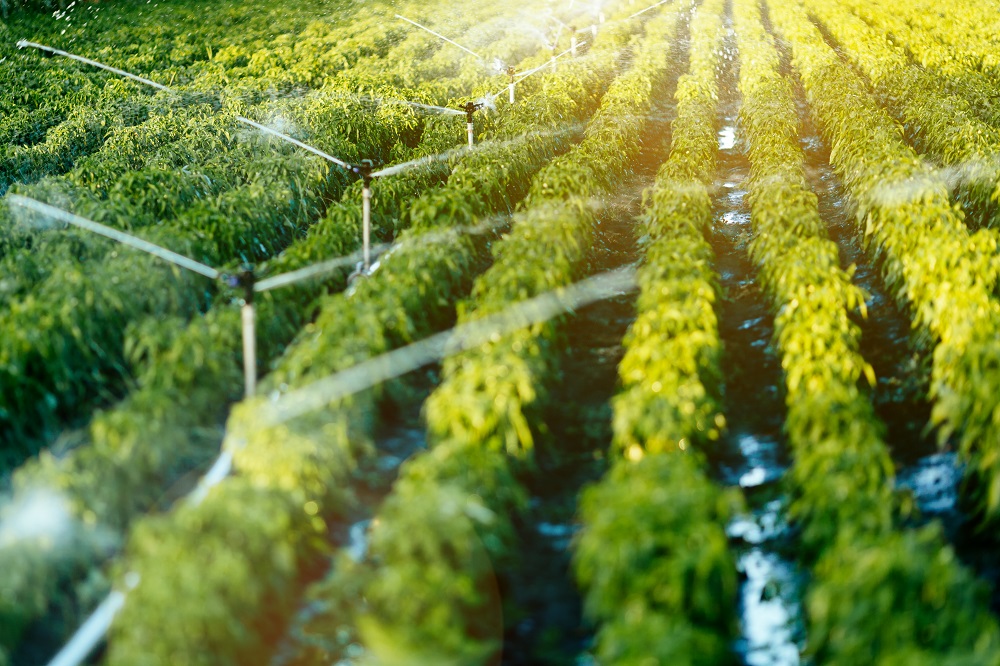 Have you ever stopped to wonder how much water it takes to supply you with enough food to eat? Everything that we eat requires water for its production – from growing the plants we eat and the plants that we feed to animals, to providing drinking water for the animals. All plants need water to grow, and the volumes required to produce our food can be quite surprising.

For example, it takes 95 litres of water to grow just 1kg of potatoes in Eastern England. In Spain, growing 1kg of strawberries takes 110 litres. Some of this water is supplied naturally by rainfall – this is known as ‘green water’. We can argue that the use of green water for food production has a low impact, as the water cannot be used for purposes other than growing plants. We could use the land for ‘natural’ vegetation instead of growing potatoes, but ultimately the water consumption would be similar. The issue is water that is withdrawn from rivers, reservoirs and the groundwater – known as ‘blue water’ – which is used to irrigate crops and to provide drinking water for animals. Unlike green water, this blue water could be used for purposes other than food production such as supplying people, businesses and industry, or sustaining the aquatic environment. So the question is, are we eating ourselves out of water?

The amount of blue water that it takes to feed us depends on what we eat. We have estimated that a typical British diet consumes approximately 160 litres of blue water from freshwater resources per person, per day[1]. The foods in our diet that use up the greatest amount of water are:

Globally, around 80% of the world’s population suffer serious threats to their water security. Aquatic ecosystems have been severely degraded due to over-exploitation of water resources or climate change. There is a growing water scarcity crisis and more than 70% of all water withdrawals are for agriculture. Not only is this a large amount of water but, more importantly, water used in agriculture is ‘consumed’ rather than being returned to the hydrological system as wastewater.


Dietary changes to save water are possible, but complicated

The global demand for water to be used in agriculture is increasing due to factors including population growth, higher consumption, changing dietary preferences and increasing aridity. The Food and Agriculture Organisation of the United Nations (FAO) has estimated that blue water withdrawals for agriculture will need to increase by 65% if we continue producing and consuming food as we are today. It is clear that what we eat has a big impact on how much water is consumed. It takes up to 20 times as much water (green and blue water) to produce 1 kcal from beef, compared to the same energy from tomatoes. Studies have shown that a vegetarian diet consumes only 50-65% of the total water (green and blue) of a ‘typical’ reference diet.

Changing your diet to save water is possible, but it is very complicated. To do so effectively, you would need to know how much water it takes to grow your food, where it was grown, how much of the water consumed was blue water, and how sensitive that location is to water scarcity. For example, it takes ~2 litres of blue water to produce a portion of British potatoes or Italian pasta, but 180 litres to produce just one portion of Basmati rice[2] – perhaps opt for chips with your curry instead of rice next time! Furthermore, it may not be as simple as just reducing the amount of meat you eat, if you, therefore, increase your consumption of fruit and vegetables. 76% of the freshwater used to grow fruit and vegetables for the UK is withdrawn overseas and most of this is from water-scarce countries such as Spain, Egypt, South Africa, Chile, Morocco, Israel and Peru[3]. An extreme example is almond drink – a dairy substitute. We estimate that it takes over 100 litres of blue water to grow the almonds to make just one litre of almond drink[4], compared to 7.5 litres for a litre of dairy milk[5]. Not only does it take more water to produce almond drink – 80% of the world’s almonds are grown in drought-stricken California, whereas most milk consumed in the UK is produced in the wetter parts of UK and Ireland. Clearly, almond milk has the potential to contribute more to water scarcity than cow’s milk.

So what can we do to reduce the amount of water consumed for food production?

It’s important that we also look at how we can reduce the impact of water withdrawal at the point of production. This means working with the value chain to improve the sustainability of food production. If we use water more efficiently, store it in times of excess and withdraw from less sensitive sources, we can avoid eating ourselves out of water.

For consumers – the best place to start is to waste less. In the UK, approximately 30% of our food and drink is wasted, meaning that we are wasting 30% of the water that has been used to produce it. Eat, drink, save water.