Homepage / Why the next generation of aircraft need to become conscious

Why the next generation of aircraft need to become conscious 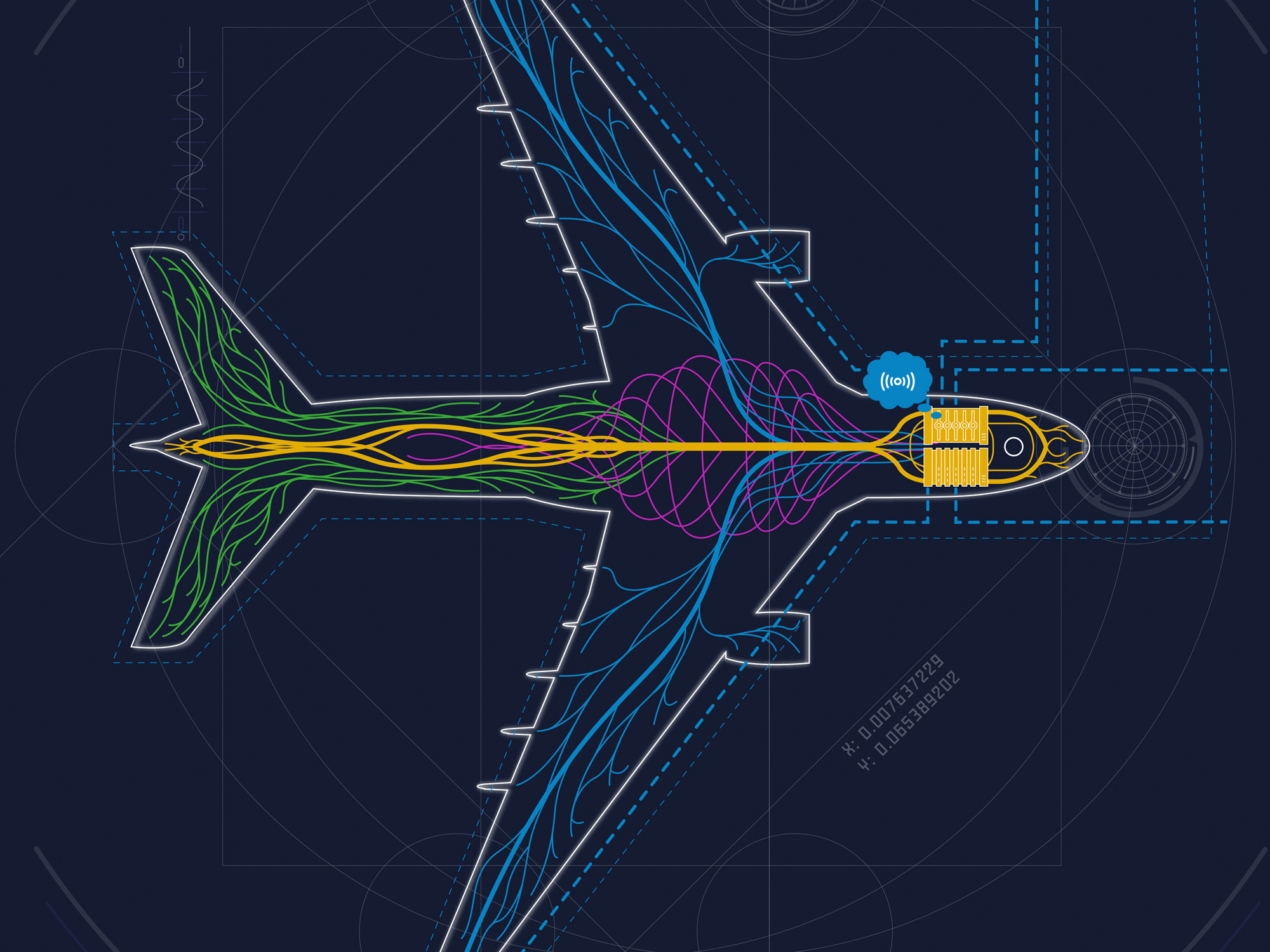 Imagine an aircraft with a human-like nervous system, aware of the health of its core organs and covered in a skin which enables it to sense damage and changes in the external environment, such as weather conditions or smoke from an ash cloud, complementing information gathered from existing on-board radar systems.

The aircraft would be able to monitor its own health status and predict maintenance requirements, then plan visits to automated hangars where spare parts are already waiting. A machine that you can have a conversation with, rather like you would have with a human, that can relate to how it is feeling at a high level and suggest what systems may need maintenance, looking after itself through awareness of its own condition.

The cost of aircraft maintenance

Maintenance overall is estimated to make up 10% of airline costs. In 2019, before Covid-19, global MRO spending was US$83 billion, with the projected spend for 2030 anticipated to be US$115 billion (pre-Covid-19 forecast was US$130 billion).

Unscheduled maintenance – where there are surprises, due to such sources as component premature failure – is a major issue with operating cost due to both delays and cancellations. In 2017 alone this amounted to more than US$6.5 billion for wide body jets and almost US$5 billion for small regional jets[1]. Minimizing the time aircraft are on the ground for maintenance also reduces risks from collision damage.

A solution to cut costs

The Conscious Aircraft principle uses sensing, advanced AI algorithms and communication technologies to increase awareness that removes risk and unnecessary costs: avoiding problems caused by component degradation, unforeseen technical failures and human error. With the reduced need for routine, planned maintenance, as well as anticipating the potential for failures, maintenance costs for a Conscious Aircraft would be cut by an estimated 30%[2].

The Integrated Vehicle Health Management (IVHM) Centre is a collaboration between Cranfield University and Boeing, with other core partners including BAE Systems and Thales. Research by the IVHM  suggests the Conscious Aircraft is becoming a reality.

The recently opened Digital Aviation Research and Technology Centre (DARTeC) at Cranfield includes a full-scale hangar laboratory housing Cranfield’s 737-400 research aircraft and the provision for aircraft inspection using drones, along with a high-level instrumentation rail to allow camera and other sensors to scan the external surfaces of aircraft for damage. 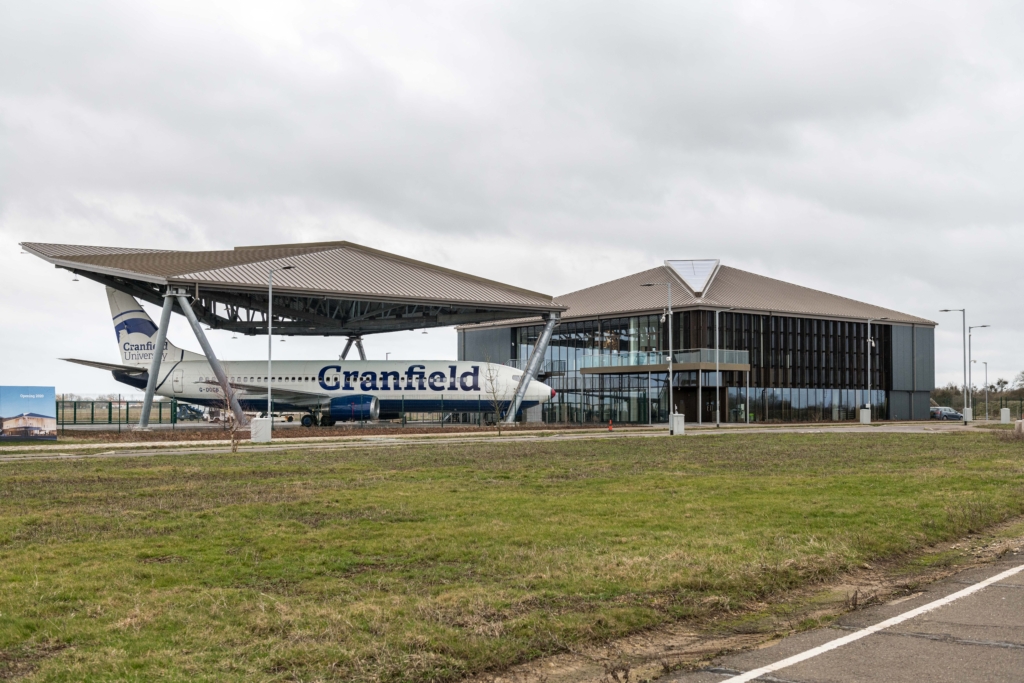 The hangar lab connects up with DARTeC’s IVHM and digital MRO laboratories, set up to represent an operations control room of an airline or maintenance facility. The digital MRO lab is being used to investigate the use of cameras to inspect aircraft and control robots as they go around an airframe. Rather than relying solely on human experience and judgement, the availability of big data, machine learning and AI will mean more sophisticated and efficient decision-making processes, drawing on a broader range of insights and evidence.

The researchers involved with Conscious Aircraft-related programs of work believe air transport operators could be using such maintenance facilities and conscious platforms within the next twenty years. The research roadmap suggests a working ultra-low maintenance prototype aircraft could be developed by 2035 and a conscious aircraft could enter service by 2040.

Depending on research funding, Cranfield is hoping to have a whole aircraft digital twin available by 2023/4 and a prototype of a digital twin with consciousness – in other words, with reasoning capability – by 2026.

The IVHM Centre is already using digital twins at a sub-system level, for example with environmental control systems to demonstrate more accurate diagnostics and prognostics along with vehicle reasoning.

This includes the capability to monitor the health of passengers and crew as well as the aircraft. The Framework for Aerospace Vehicle Reasoning (FAVER) tool under development at Cranfield is an example of an AI reasoning engine being used to identify how much data is needed to make accurate predictions, and whether information is needed from other systems to find the actual source of a fault, leading to targeted maintenance.

A key element of making full use of Conscious Aircraft will be advances in the human-machine interface (HMI). It is essential that the interface between the human brain and the conscious aircraft is seamless and facilitates effective and timely decision making – both for pilots and ground-based maintenance engineers.

Another major benefit of self-aware aircraft will be that combined with advanced HMIs – such as brain-computer interfaces, synthetic telepathy, brain enhancement and virtual reality / augmented reality technology ­– pilots and engineers will be able to communicate intuitively with aircraft. This will enable faster and better decisions when unexpected events occur during flights and reduce the risk of accidents caused by human error.

A longer-term aspiration, arising from a growing understanding of the way the brain works and how it makes decisions, and drawing from developments in cognitive and behavioral science, is to use advanced HMIs to allow pilots and engineers to sense the health of the aircraft as if it was a part of their own body.

The Covid-19 pandemic and the associated need for both cost efficiencies and protection for staff, has emphasized the value of autonomous hangar operations. With the conscious aircraft model, data is synchronized with ground-based systems to optimize how the aircraft is managed throughout its lifecycle.

Hangars will become data-driven and based around autonomous technologies, with inspections carried out using a combination of aerial and ground-based robotics. So-called lights out MRO hangars – automated facilities which only switch on when they are needed – will be hubs for remote maintenance engineers to engage with as needed.

In these hangars, drones equipped with visual and thermal systems that enable non-destructive testing (NDT) will fly around the aircraft structure to locate anomalies and problematic areas both externally and within the structure.

Data from NDT inspections will be analyzed using artificial intelligence (AI) and evidence from digital twins. The simulations will be used to make decisions on airworthiness, assessing whether there is any need for maintenance now and in the future, as well as an immediate fly / no fly decision.

The use of automation and AI reduces the reliance on human interactions, but AI safety, the verification, validation, security and control of safety decisions made by AI will be critical. Along with facilitating planning for future MRO to minimize operational costs and risks to human engineers, hangars of the future will reduce the risks of aircraft not being available resulting in disruption to services. This will make it more viable for airlines to work with smaller fleets.

The lights out MRO hangar remains a future concept, but research projects are piecing together the necessary elements of technology for integration.

Technical roadblocks at this stage are around ensuring the resilience of the architecture and associated communications, developing the sophistication and safety of applying AI and increasing the autonomy of robotics.

Aside from the technology, there will also be the need for regulatory approval to demonstrate that autonomous systems for maintenance can be as safe as manual, and that won’t be straightforward based on the evidence from the development of autonomous cars. Work will also be needed to create business models that fit the changing industry and market needs.

Another fundamental challenge comes in the form of the digital infrastructure of aviation operations. Data on thousands of health parameters, engine performance, pressure, rotor speeds, temperatures, vibration, can all be communicated to the ground in real-time for health monitoring. The problem is a data bottleneck in aviation: a lack of speed and capacity of data transfer at a cost that makes business sense. Compared with traditional aircraft, the new generation models are expected to produce 30 times more data.

The sector knows its future will be founded on transformational technologies, the third revolution of digital and sustainable tech. But crucially, the success of the third revolution in aviation will also be dependent on the MRO — how those innovations are made part of highly efficient and financially viable operations.

Professor Ian Jennions is the Technical Director of the Integrated Vehicle Health Management (IVHM) Centre, Cranfield University. Ian’s career spans over 40 years, working mostly for a variety of gas turbine companies. He has a Mechanical Engineering degree and a PhD in CFD both from Imperial College, London. He has worked for Rolls-Royce (twice), General Electric and Alstom in a number of technical roles, gaining experience in aerodynamics, heat transfer, fluid systems, mechanical design, combustion, services and IVHM. Ian moved to Cranfield in July 2008 as Professor and Director of the newly formed IVHM Centre, and ran the Centre until July 2020.