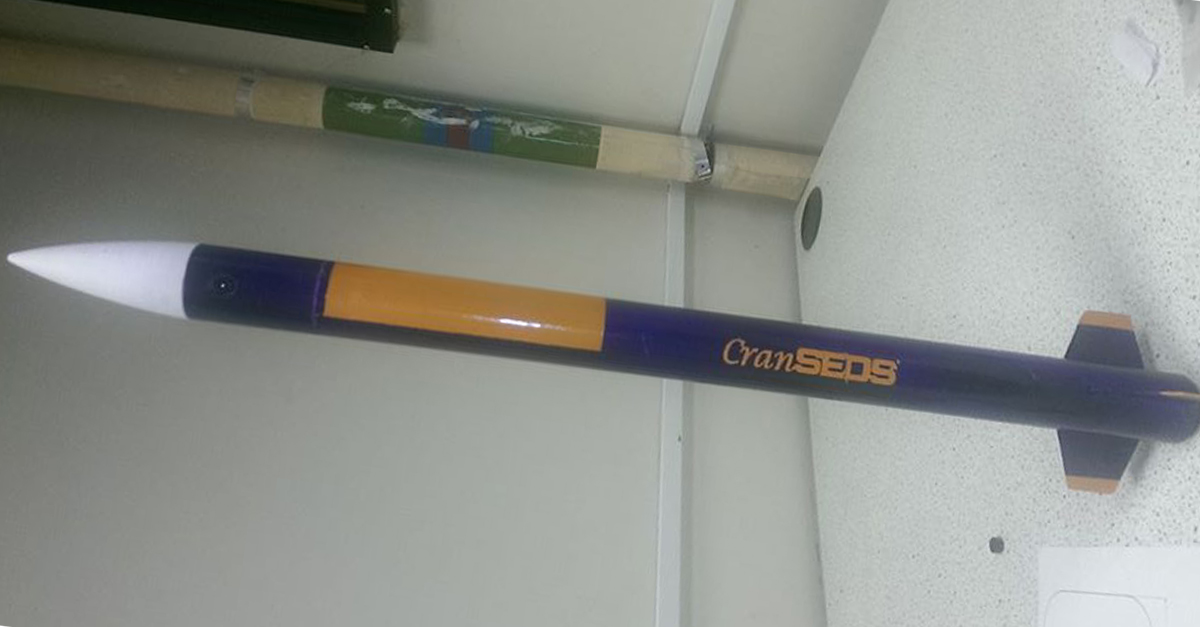 As well as studying MSc Astronautics and Space Engineering at Cranfield University, I am also currently treasurer of CranSEDS – Cranfield Students for the Exploration and Development of Space. As part of this society, our president Robert Sandford, Aqeel Shamsul, Rosario Lopez Estergaard Jacobsen and I undertook a project to build a small, solid motor rocket. This was in conjunction with the UKSEDS rocketry competition.

In the photo above you can see the finished rocket, completed and ready for launch, which we did on 10 July this year. The payload included an altimeter and a small, low resolution camera to record the duration of the flight.

The rocket was a simple singular deployment, solid motor vehicle. This means that the rocket was designed such that the nose cone (white) and payload section (section above the orange) were one unit which, when the parachute was deployed, would separate from the main body tube, or engine section (the main part of the rocket, seen with the Cranseds logo, in orange).

The rocket was successfully launched by myself and Giulia Serra, reaching an altitude of over 1200ft! The camera recorded the flight, including successful deployment of the parachute that allowed for a soft landing in the fields around Norton-Juxta Twycross. This was in association with Midland Rocketry club who were kind enough to allow us to launch our rocket at one of their monthly events at this launch site.

The rocket will be ready to launch again in the future and is just one of the many projects which CranSEDS has undertaken this year. The projects range from rocketry to atmospheric studies using high altitude weather balloons. These projects are really important practical applications of the theory learned during the aerospace and aeronautical courses here at Cranfield University.

Find out more about CranSEDS and aerospace courses at Cranfield…