Homepage / My experience of studying an MSc in Robotics

My experience of studying an MSc in Robotics 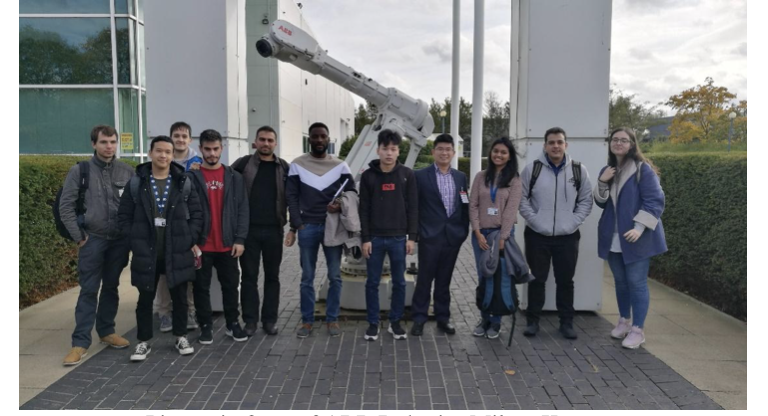 Hello, my name is Raviteja Burugu, I am from India and I am studying an MSc in Robotics.

In this blog I will share my experience as a student during the Induction Week and first taught module “fundamentals of robotics”.

I have been interested in Robotics since my undergraduate degree, where I have got a chance to design, build and compete for a MARS Rover challenge in the USA which made me explore more about various domains of Robotics. After studying Mechanical Engineering from SRM University, India, I started working for Royal Enfield as a Graduate Engineer and promoted to Assistant Manager after training in various departments in the manufacturing industry, Later I moved on to work for a product development company where I have worked as a software developer for two years.

My experience in various fields and my passion for robots enabled me to hunt for a university that provides a master’s degree which is research intensive and industrial orientated in the field of robotics. I found Cranfield University, which is renowned for its intensive research and industrial applications of robotics and I gracefully secured admission. I was very excited to begin my journey to study an MSc in Robotics at Cranfield. We have a visit to ABB Robots Company at Milton Keynes as part of the curriculum, which multiplied my zest to grab the opportunity to visit the company, see and learn how people work during the development of robotic systems.

The initial two days was an introduction to the course, I was very happy to meet people from different countries with various backgrounds of engineering and have a mutual interest to pursue masters in Robotics. I felt quite confident with the facilities which have been shown during the introduction, like FANUC collaborative robot, UR5 Robot which is used in the industry very often, companion robots like NAO and Miro. The course has kick-started in a unique style with a LEGO robot competition where we have been divided into groups and given a LEGO kit to make a LEGO robot that should have various capabilities like high Speed, Line follower, colour detection, Obstacle detection, and innovative design in two days.

Although our team did not end up winning the competition, I gained  worthy experience working with people from different countries, their approach towards a problem and the outlook. As I have come from India the way I look at the problem is quite distinct from a student who has come from Europe or China. As we have four teams I have also got the opportunity to learn about factors that need to be considered for designing proper LEGO robots with different abilities. The competition has made me think in a broader perspective about the design of a robot.

To initiate a course, course fundamentals are always vital and they help you acquaint with the core of the subject.

Fundamentals of Robotics was my first module, I have looked into the pre reading / pre-work slides which were uploaded on the portal (blackboard), I was excited to know that we are having Dr. Marco Chacin as Guest lecture form AIRBUS along with Dr. Gilbert Tang the Course Director to teach this module. I was very happy by the end of three days of lectures, I was able to gain an in-depth understanding of the evolution of the robots, classification of the robots, basics about the sensing, control of robots and metrology in robotics. The healthy discussions about each and every topic made me engage more and also gave me the opportunity to express my views. Cases studies shown during the lectures about the real-time challenges like Fukushima Daiichi, designing a sheet metal pressing robotic system for a client which made me think about the various factors involved in developing a robotic system.

The lectures were not only limited to the success stories of robots or industrial robots but also about the various scientific disasters of robots, campanian robots like Miro, space robots like Mars Rovers, a mission to asteroids, the world’s best robotics competitions like DARPA Grand challenge.

As a part of the course, we got an Igus Robot demonstration, we were allowed to discuss with the Igus company engineers about the challenges they have faced during the development of robots. They have used different composite materials for making the free movement between the parts instead of traditional lubrication methods, which made me ponder about evolution material technology in robotics.

Simultaneously during the afternoon session, we have been taught how to use the robot studio. Every one of us has developed a simulation using the ABB robot. The most intriguing part was the simulation we have developed will be executed on ABB Company’s robot.

My visit to ABB Robotics Company in Milton Keynes.

As I was excited to visit the company even before starting  of my course, I can see that happen and I have seen many robots as we have tour to visit the company and see the robot that are present. I have seen the Yumi with 14 DOF at the entrance of which was giving us the warm welcome. There were robots with various size and applications. The most interesting part is about deploying the simulation which was developed by us on the ABB company’s robot.

I have learned how the educational and industrial development of simulation differs from the explanation given to us while deploying the simulation by ABB Company employee about the mistakes we students generally tend to make compared with professionals.

The course does not end here, the assessment that was given to evaluate us was very interesting and made us utilize all the knowledge and skills acquired during the course and finally by the end of the course. It was a great educational experience about the robots and this module was what I had envisioned, a university which provides me wih a master;s which is industrial orientated and research Intense.

Thank you for reading the blog you can find more details about the course at https://www.cranfield.ac.uk/courses/taught/robotics