Homepage / My experience at the European Mars Conference 2019

My experience at the European Mars Conference 2019 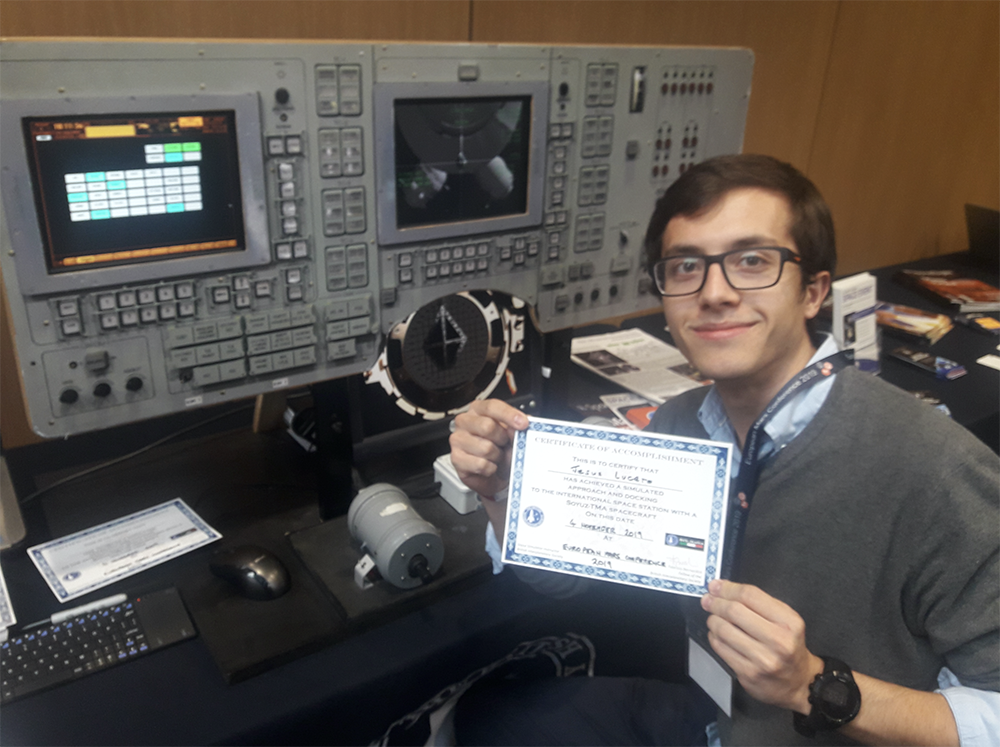 My name is Jesus Lucero, I am a Spanish student currently studying the MSc in Astronautics and Space Engineering. I am member of a Group Design Project directed by Dr. David Cullen and Dr. Joan Pau Sánchez Cuartielles and we are working on designing a sustainable settlement on Mars. Our objective is to model how a community of humans would have to organize in Mars in order to feed, communicate with Earth, do science research and live, and also determine what the best timeline to do so would be.

From November 4th to November 6th the European Mars Conference 2019 was held at the Institute of Physics in London, this is the most relevant event about Mars of the year in Europe. It was organised by the Mars Society UK, a community which is part of the International Mars Society, the world’s largest and most influential space advocacy organisation dedicated to the human exploration and settlement of the planet Mars. It was founded Dr. Robert Zubrin and others in 1998, they organise public outreach, promote broad international support for government-funded Mars research and exploration.

The three-day science event theme was “Arrive, Survive and Thrive”, and leaders of industry, engineers and academia presented their work, as well as their proposed paths to the planet Mars. It was very well organised and the attention given by the organisers was wonderful, we had the possibility to meet so many experts and learn so much about subjects like radiation, interplanetary travel and colonies. All this knowledge is going to be very useful for our research project.

Lucinda Offer, Vice-president of the Mars Society UK, Alan Field, Chapter Coordinator, and all the volunteers were key on the synergic atmosphere that it was created. Young students from Slovakia, Albania, Mongolia, UK, Italy, Austria and Spain being able to interact with experts in so many different fields, from telecommunications to astrobiology, analog astronauts, who people that receive an astronaut-like training on Earth, was all a really enriching experience we will never forget.

The first day we listened to Anastasia Stepanova, a Russian analog astronaut, who talked about her experience on the SIRIUS isolation project where she stayed with a team of five people in a Mars-bunker-like house for eight months. We then listened to Dr. Jorge Pla-García, a Spanish meteorologist who talked about Methane in the surface of Mars and about the crucial Spanish participation on the project. After that we participated in the AMADEE graduation of analog astronauts from the Austrian Space Forum. Throughout the day we had more talks from companies like Airbus, RAL Space and a final talk of Dr. Robert Zubrin, one of the most important Mars experts of the world.

The second day, two more students from the Cranfield research project joined me at the event, Iu Tena Acebo and Gary Siu, the reason was because we had very relevant talks related to our project on the second day. It began with Richard Heidmann, from Switzerland, explaining an outline of what a colony would be like in Mars, giving magnitude orders which were really illustrative. Then Professor David Cullen from Cranfield University, one of our Group Design Project supervisors, explained his participation in payload project designs for tools that would look for life in Mars. We finished the day with a talk from a Polish student team who had won the Mars Rovers Challenge for two consecutive years. What an inspiration! After the event we had the chance to go on the roof of a hotel and look at the fireworks on Guy Fawkes Night, a tradition quite unknown in Spain. We also saw the Tower of London and the Shard in the background.

On the third and final day Lockheed and Martin began with a presentation on a ESA-NASA collaboration mission they are working in, we then listened to a new UK based start-up called UKAM will try to organize analog astronaut training in the UK. Later Magadalena Pfaffl from Sweden talked about different communities and psychology, followed by Dr. Anna Horleston a JPL associate who is an expert on Marsquakes and the Insight mission. We finished the day with the singing of the Mars Anthem “Rise to Mars” and a visit to the “Moving to Mars” exhibition at the Design Museum Tour, which will be available until February.

I deeply thank Cranfield University and its teachers for giving me the possibility of going to this event as it will help on the development of our research. I now have to share the knowledge and network I have acquired during this week with my colleagues, so we all have the access to the same information.