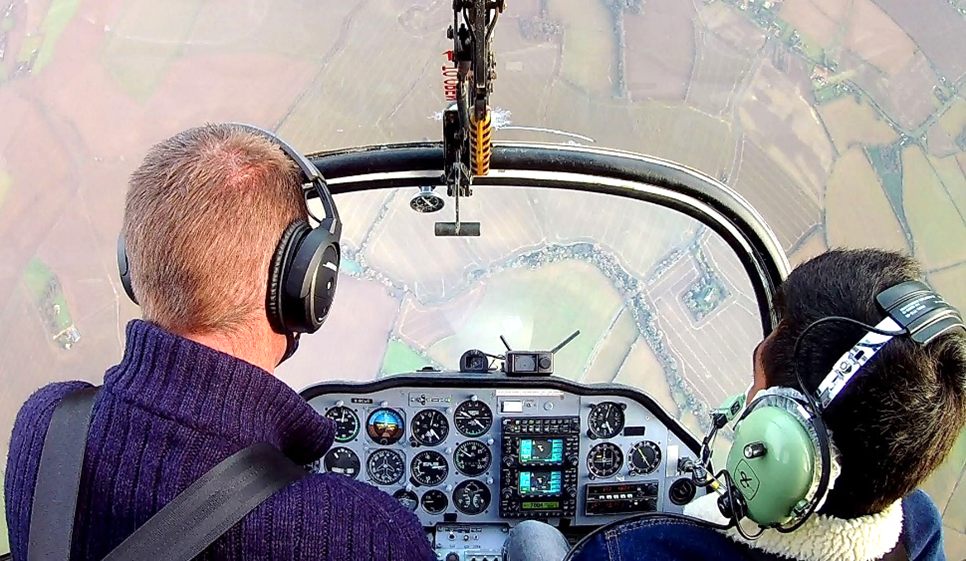 In my previous background, I majored in electronics and communication engineering. So, I often found myself surrounded by soldering irons, transistors and breadboards. Cut to years after my undergraduate days, I felt like I needed to indulge myself in experiments that usually span at higher altitudes. The flight experience is an age-old tradition of Cranfield University spanning back to the 1950s and I am truly proud to be a part of it.

I have had two flight experiences so far. I first flew in the National Flying Laboratory Centre (NFLC) British Aerospace Jetstream series 31 aircraft. The experiments conducted in the Jetstream 31 introduced me to the performance and handling characteristics of the aircraft. Prior to the flight, we had the safety briefing that gave clear inception of the aircraft and the experiments to be conducted by us. The Jetstream 31 is capable of flying at 25,000 ft. However, we flew at a steady-level altitude of 3,400 ft (on an average) to conduct our measurements. Steady-level flight allows us to easily comprehend the lift and drag characteristics of the aircraft. The first task involved taking down our estimations of the airspeed, pitch attitude and thrust values for both engines. These values are then used to analyse the lift and drag measurements. There are small LCD screens present behind each seat that emulates an observer’s panel from which we obtain our values. I was seated right behind the front pressure bulkhead so I was able to look at the pilot’s handling of the controls.

Following lift and drag measurements, we then moved on to conduct our measurement of the longitudinal static stability of the aircraft. This experiment involved changing the aircraft’s Angle-of-Attack (AoA) that causes a pitching moment to restore it to its original position. I’ve read about this concept in textbooks but having to experience it is almost a magical feeling. The longitudinal static stability test also showed us ways in which the aircraft should conform to airworthiness standards. We then transitioned to dynamic stability modes such as phugoid oscillations, Dutch rolls and the infamous spiral roll or spiral dive or spiral divergence (I’m going to refer to it as a spiral!). The spiral was one of the most soul-stirring moments ever. Unlike the graveyard spiral, this is a controlled manoeuvre that involves banking the aircraft at approximately 20 degrees which leads to an unstable divergent spiral descent. And with the coordinated use of the aileron and the rudder, the pilot was able to bring the aircraft back into steady-level flight. It was truly remarkable!

The following day, I was told that I would be flying the Scottish Aviation Bulldog. I remember standing outside the flight briefing room in Building 83 fiercely praying that the weather would act in my favour. I had waited for this moment for months. On a side note, one of my biggest fears is the fear of heights. I sometimes can’t even imagine standing at the edge of a cliff. The Jetstream 31 aircraft had a small window so I tried to look outside intermittently and it didn’t bother my senses. However, the Bulldog is a magnificent aerobatic beast that is also capable of shaking every nerve in your body (at least for me). Facing my fear of heights in an aerobatic aircraft was definitely a challenge I looked forward to.

Finally, it was confirmed by Mr Simon Davies that I would, indeed, be flying and that the weather was looking fine. Mr Davies, a former military test pilot and the current test pilot for the NFLC, had provided a very articulate outline of the flight experience that was to be conducted. Talking to Mr Davies helped alleviate some of my fears and kept me in a clear state of mind. I was later instructed to fly with Mr Robert Harrison, the senior management pilot at Cranfield University. After the briefing, we headed down to execute the pre-flight checks. The intricate pre-flight checks and the communications with the Air Traffic Control (ATC) are so cool and it gave me goosebumps. It made me recollect a memory from a couple of years ago. Back in my undergraduate days, there was one thing that always kept me going and it was the very thought of me flying. During lecture hours, I couldn’t keep my eyes open so I used to close them and picture myself executing pre-flight checks and talking to the ATC before taking off in an imaginary aircraft. The many visions I had fuelled my desire to know more about the fundamental aspects of flying.

Mr Harrison starts the engine and begins to taxi his way around. After passing through a distance, he instructs me to keep the aircraft in a straight line using the rudder pedals. At first, I thought he was joking but then I quickly applied force on the rudder pedals. This was the first time that I got to experience what it’s like to control a REAL aircraft. I don’t intend to get ahead of myself but taxiing the Bulldog is easy and fun! Before taking off, Mr Harrison instructed me to hold on to the yoke to get a better understanding of the controls whilst he pushed the throttle lever forward. Following our climb, we had decided to cruise at a specified altitude. I am unsure at what altitude we were flying but it was clear enough to have a look at the windmills down below. After tutoring me on the dynamic stability modes, Mr Harrison then proceeded to introduce me to the aerobatic manoeuvres.

The first manoeuvre was the barrel roll, an integrated loop and roll manoeuvre. This is executed by first pulling the yoke back to pitch up to the desired angle. After which, we roll the aircraft by pulling the yoke sideways. This way, we are moving about the longitudinal and lateral axes unlike the aileron roll, which is only about the longitudinal axis.

Following the barrel roll, we then went on to perform the stall turn. I found stall turns to be quite relaxing. Stall turns are also sometimes referred to as Fieseler, a term derived from Gerhard Fieseler, a German World War I flying ace. Stall turns are carried out at high power and airspeeds. The aircraft is pitched up to an approximate 90-degree angle that causes the engine to stall temporarily. This led Mr Harrison to step on the rudder pedals to yaw the aircraft till it was nose down which would allow the aircraft to gain power and airspeed and resume stable flight.

The final manoeuvre was the loop, a fundamental aerobatic display. Many of us love watching this age-old manoeuvre. Loops are 360-degree turns in the vertical plane and not the horizontal. I, for one, have never been a fan of rollercoaster rides but this was most likely the closest experience.

Amusement rides are scary but one of the most fascinating takeaways was me forgetting my fear of heights as we continued to fly. I even asked Mr Harrison if we could do all of it again to which he gladly obliged. This time, we consecutively performed the stall turn, barrel roll, loop and a unique noddy stall manoeuvre. The noddy stall turn is like a stall turn that involves yawing the aircraft left and right while flying vertically upwards and then allowing the aircraft to stall.

After finishing our aerobatic adventure, I was then instructed to steer the aircraft back to Cranfield Airport. Mr Harrison guided me on the navigation as I played with the controls. I am so used to riding scooters and bikes, I just couldn’t fathom controlling a vehicle without the ground beneath. I highly encourage students to take up flight experiences regardless of your background.

The student experience flight at Cranfield University is something that is cherished by the majority of the students. It is a critical phase of our academic journey where we understand the integration of theory with practicality. There are many more intricate details that I have not shared in this blog but for those who want to know more can reach out to me. I also hope to use this experience as leverage to overcome many obstacles in the future and step into my discomfort zone more often.

My next blog will cover my plans after graduation plus my advice to future students of this MSc course.