My Cranfield MSc: Astronautics and Space Engineering – Pathway to space. 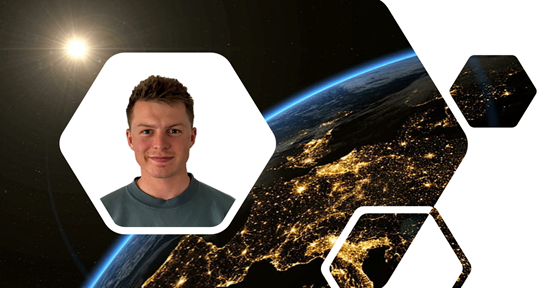 Where did it all start? How did I become interested in the space sector? I would say that my interest in aerospace originated from my passion for aircraft and helicopters from an early age. I remember I did my high school work experience shadowing an RAF helicopter pilot and was lucky enough to get a few flights with him in the Eurocopter Squirrel HT1 from the Defence Helicopter Flying School out of RAF Shawbury back in 2014.

From then, I developed a real passion towards flying and really wanted to become a fast jet pilot in the RAF. Due to this interest, I took up flying lessons from my local airfield when I was 16 and managed to do my first solo flight before the time I got my driving licence! As I was spending so much time at the airfield, I managed to pick up a part-time job there where I started off as an Air Traffic Service Assistant in the tower.

I continued with this job through college, progressing to an Air Ground Controller after obtaining my Radio Operators Certificate of Competence (ROCC) from the Civil Aviation Authority in 2017 to operate VHF radiotelephony equipment and exchange spoken messages in the aeronautical radio services.

In terms of academia, my strongest subjects were maths and physics, which ultimately lead me to study this combination in college as well, as well as psychology, physical education and an Extended Project Qualification (EPQ) looking into lift generation and aerofoil characteristics. This ultimately then led me to study my BEng in Aerospace Engineering with Pilot Studies down in Bristol.

I only really started to specialise in space flight during my final year, choosing to tailor my elective modules towards spacecraft engineering, which gave me valuable experience in simulation exercises on geometric orbit design, mission and spacecraft systems engineering using the Open Cosmos beeApp simulator as well as analysis of radiation dosage on shielding thickness and spacecraft mean body temperature with the STK Space Environment and Effects Tool.

As my personal interests are within space flight and rocket propulsion systems, this led me to do my final year individual project on an exploration of the design of liquid bi-propellent engines, with a practical investigation into the combustion phase using CFD. For those who don’t know what CFD is, it is Computational Fluid Dynamics, and engineers use it to model fluid flow to simulate real life applications. In my case, this was the chemical reaction of various combinations of fuels and oxidisers and see how they affected the performance of the engine, the specific impulse. I then took this further, and am now studying Astronautics and Space Engineering MSc at Cranfield University.

The rain falls on everyone, but drought hits the most marginalised worst

The Intergovernmental Panel on Climate Change (IPCC) recently reported that we will experience an increased frequency of climate-induced disasters such as famines and droughts and humanitarian crises like displacements, with Africa being singled out ...

The Flight Experience module is one of the most awaited events by Aerospace Vehicle Design MSc students. A cold and cloudy Tuesday in January was the day when we had the opportunity to board ...

We have organised trial access to Debrette’s Etiquette until 31 July. Debrett’s Etiquette is an unrivalled guide to protocol and modern manners, offering advice about: addressing royalty, people with titles and members of the professions ...

We are a society that is very much intertwined with our ‘things’ – they mediate all our relationships. But why do people adopt certain technologies, and reject others? What motivates societies to choose new ...

As the world works to reduce greenhouse gas (GHG) emissions through various initiatives such as the introduction of grants and commissions for research advancement toward the further use of sustainable aviation fuel, Diamondo Earthrounding ...

We are very excited and proud to announce that the 1,000th Cranfield Defence and Security (CDS) staff publication has been uploaded to CERES, our institutional repository. Dicken L, Knock C, Carr D, Beckett S. (2022) ...