Homepage / Honour the past, sponsor a piece of the future

Honour the past, sponsor a piece of the future 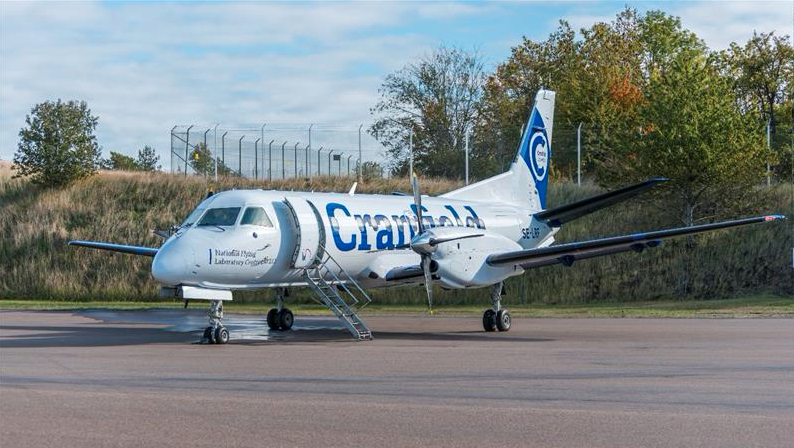 A once-in-a-lifetime opportunity to give the gift of wide-open skies to a new generation of high-flyers.

Imagine the feeling, the soaring sense of pride, of seeing the National Flying Laboratory Centre’s (NFLC’s) flying classroom take off at Farnborough and thinking; ‘I have sponsored a part on that aircraft.’

This was the introduction to the first campaign copy I ever wrote at Cranfield, for the National Flying Laboratory Centre page.

I joined the Alumni Relations and Development Team in April 2020, at the height of the pandemic. The first couple of weeks were an unsettling time, not least because I had joined the team remotely during lockdown. Everyone in the team and across the University had gone to great lengths to make me feel part of the #CranfieldCommunity. My anxiety was largely the result of joining a team as a Regular Giving Manager at a time when fundraising for anything other than Covid-19 emergency funding would be deemed insensitive and out of touch.

I was offered my role in February, when the world seemed a very different place, and had some exciting campaigns I would be taking over when I joined in April. Suddenly, within weeks, all fundraising efforts were put on hold.

Hence, on a bright morning in May, when I was given the go ahead for the soft launch of the new NFLC campaign, I was excited and terrified in equal measure. I sat staring at the cursor as it flashed on the blank Word document on my screen.

The answer came from the amazing group of academics and colleagues who I feel privileged to work alongside. Sponsoring a part of an aircraft – to echo Chris Leaman’s recent Facebook post – was a compelling opportunity; not only for our alumni but for anyone with a speck of an interest in the future of aviation.

I learned very early on not to use the word ‘plane’ in the presence of Professors Helen Atkinson or Graham Braithwaite! Aviation has been a part of Cranfield from its earliest days, when it was founded as the College of Aeronautics on a former RAF base in 1946. We have a proud history of being at the forefront of aviation and aerospace research and education. Cranfield is the only university in Europe to have its own airport, pilots, air navigation service provider, and its own aircraft, and remains unsurpassed in the development of the aerospace leaders of tomorrow.

The much-loved Jetstream 31 – the hub of many special Cranfield memories for our alumni and the aircraft that launched thousands of careers in aviation – is being replaced with the Saab 340B. This will allow the NFLC to accommodate more students on each flight and will create new research capabilities and collaboration opportunities thanks to the technical equipment necessary to push boundaries and test the limits of aviation.

Cranfield alumni have a once-in-a-lifetime opportunity for to give the gift of wide-open skies to a new generation of high-flyers.

Two months after I wrote the copy for the soft launch of the campaign, I got the green light to finally do what I had come to Cranfield to do: run a fundraising campaign. In those two months, two things happened. The first was the realisation that the pandemic was not a short-term inconvenience for our world – and for the world of fundraising – but was a long-term challenge which required complicated solutions. The second was that I got to appreciate the pride in Cranfield’s strong heritage as a leader in aviation.

“The pandemic is not just a short-term inconvenience for our world – and for the world of fundraising – but a long-term challenge which required complicated solutions.”

Since then, I’ve had the chance to get to know some of our academics and our alumni who’ve supported the NFLC campaign since its launch in 2019. I also got to read memories shared by our alumni who experienced flights on the Jetstream 31 and the Bulldog.

“One of Cranfield’s unique facilities, among many, is its flying classroom aircraft. These give a unique experience that thrills and gives a sound context for all the lectures and experiments. A ‘dutch roll’ and stalls must be experienced,” Professor Fielding said about the crucial role the ‘flying classroom’ has.

When Professor Fielding had the opportunity to sponsor a part, he didn’t hesitate to choose the passenger door – “to welcome all the future students to a Cranfield aircraft, to follow those who had entered the Ansons, Tiger Moths, Austers, Bulldogs, Doves, Jetstreams, but not the Paris, as we had to climb over the cockpit coaming!”

Whilst women in aviation are still the exceptions to the rule, there are high-flyers among our female alumni. Sarah Qureshi (MSc. Aerospace Dynamics 2008, PhD Aerospace Propulsion 2016) is now the CEO and founding director of Aero Engine Craft (Pvt) Ltd.

“My time on the Jetstream was the most unique and the best part of my UK education experience.”

Sarah Qureshi, distinguished Aerospace Alumna 2020 Award winner in 2020 and a Visiting Fellow at the School of Aerospace

In as much as the STEM scale is tipped towards male dominance in the industry, carrying on the “long legacy of brilliant female leaders who have set the stage and continue to set an example at Cranfield” is Professor Helen Atkinson, CBE, FREng, Pro-Vice-Chancellor School of Aerospace, Transport Systems and Manufacturing, leading the NFLC.

While reading the memories of the former Flying Classrooms from our alumni, it was interesting to see how many talked as much about the future in the form of advice to current students and new alumni as they did about Cranfield’s splendid past. A common thread was the acknowledgement from many alumni that 2020 was the start of what will undoubtedly be a tough time for aviation.

“I think it’ll still be possible to have a successful and fulfilling career in aviation, but it will likely require more out-of-the-box thinking and more course changes than was the case in the past.”

Echoing Edmonds’ words, with green recovery also in mind, was Koray Yilmaz (MSc Aerospace Vehicle Design 2004), Captain, SunExpress, who advised, “I would urge those entering the industry to step in with the mind-set that we can no longer rely on readily available technologies to maintain our signature on earth, as we should really be striving for innovative ideas and concepts that can save our planet from extinction.”

As daunting as the future may be, six months into the role, I have adopted the Cranfield motto, “After clouds, light.” With two months left of the year that’s been so monumental for the world, and so definitive for the future of many industries, we have gone live this week with a campaign to give the gift of wide open skies to a new generation of high-flyers who are best placed to learn, innovate, and shape the future.

Where better to start investing in the future of aviation than Cranfield, with over 70 years’ history in the development of future leaders in aerospace and aviation across the globe? Together, we can help prepare the aerospace leaders of the future, create an environment that supports insight and innovation in an increasingly complex world, and provide solutions to tackle challenges such as aircraft emissions and climate change.

Find out more about the NFLC and our new aircraft…

This story was edited by Amy Knight as part of the Step Up blog initiative. If you have a story to share or would like to find out more about the Step Up Network, please email stepup@cranfield.ac.uk.

The Step Up blog was launched in celebration of our connectedness and Cranfield’s unwavering commitment to support its staff through Covid-19 and beyond.

The Step Up Network exists to provide an inclusive network to support and create development opportunities for women at Cranfield University which supports the wider University Diversity & Inclusion strategy and Athena SWAN commitments.