Homepage / Designing the next generation of ultra efficient aero engines

Designing the next generation of ultra efficient aero engines 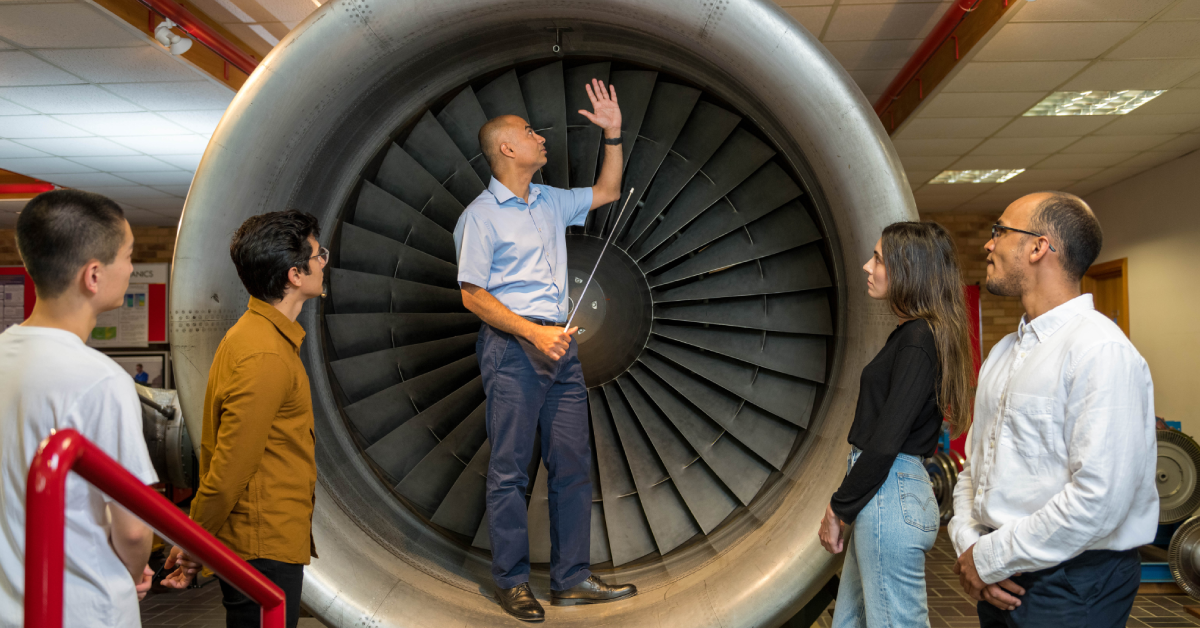 The Centre for Propulsion Engineering at Cranfield University hosts the Rolls-Royce University Technology Centre where research work in the areas of aero system design, integration and performance is carried out.

Amongst several areas of world-leading, state-of-the-art, research in the Centre – which ensures a sustainable future for aviation – the work on reverse thrust-capable Variable Pitch Fans (VPF) has garnered significant attention by earning several accolades in the form of awards, industrial and academic recognition, valuable patents and high-impact publications.

This blog provides a ‘not-too-technical’ brief overview of why a VPF can be a potential gamechanger in contributing towards aviation sustainability and also provide a sneak-peak into some interesting results obtained from the research in the Rolls-Royce UTC.

So, what is a VPF and why does it matter… 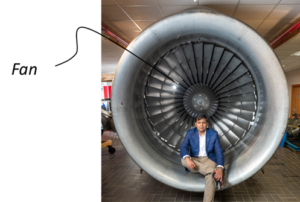 In civil jet liner engines, the fan is the part which is visible from the engine front; often seen in cool photographs snapped by Cranfield students in the Engine Display room in the Whittle building. The fan spins and pressurises the airflow through it with the power produced by a core engine located behind it. This core engine typically uses only a small fraction of the airflow from the fan to burn fuel and produce power required to spin the fan. The remaining pressurised flow from the fan is bypassed around the core engine and exhausted through a large bypass nozzle to generate most of the thrust. Several studies have shown that engines become more efficient if more flow is bypassed around the core engine – this is because we are moving more air to generate more thrust from smaller core engines, increasing a parameter called ‘propulsive efficiency’. In such large engines, the VPF, in which the setting angle of the fan blades (the angle at which the fan blades are visible to you in the picture) can be changed by actuation mechanisms within the fan spinner (central conical protrusion in the picture), can ensure stable, quiet engine operation and contribute to further improving engine efficiency.

Moreover, the trump card with the VPF is that it can be used to reverse airflow within the engine and help the aircraft to safely decelerate on the runway during the aircraft landing run. At present, aircraft deceleration on the runway is achieved by using large bulky cascade thrust reversers that are located in the engine outer covering. Therefore, using a revere thrust-capable VPF can eliminate the bulky thrust reversers to significantly reduce the overall aircraft weight and make the engine cover more aerodynamically efficient as well. It is estimated that up to a whopping 15% reduction in aircraft mission fuel burn is achievable with the reverse thrust VPF technology. This is an important step towards contributing to sustainable aviation in long range aircrafts. Moreover, this technology can be used with future electric aircraft and hydrogen-fuelled aircraft to add to the cascade of benefits in ensuring future sustainable aviation.

The airflow direction through the VPF can be reversed by rotating the fan blade aerofoils by 90°, as shown in the animation.

This is because the fan suction in the rotated position (end of the animation) acts behind the engine rather than ahead of the engine. In simple words, it is as though the fan is now facing towards the engine rear than the front. The basic technology investigations regarding the ability of VPF to establish reverse airflow (flow from the rear of the fan) were conducted by NASA research programmes up until the 2000’s. These programmes established the design guidelines to develop reverse flow- capable VPF designs. However, how the reverse thrust VPF would perform in an actual aircraft landing in a runway, which is in essence the proof of the pudding, was not yet known.

So, that is what we did in the VPF reverse thrust research at the Centre. A large computational VPF reverse thrust research model that includes a typical 300-seater aircraft with full details of the engine internal flow paths featuring the VPF in reverse thrust mode, wings in the typical landing configuration with slats, flaps and spoilers deployed, and to top it all a translating plane to mimic the rolling runway during the aircraft landing was developed. At the time of writing this blog, the computational model is the most complete representation attempted anywhere in the world of a full integrated aircraft-engine with the internal flow paths! The VPF reverse thrust aircraft model was digitally ‘landed’ in the high-performance computing facility at Cranfield to simulate the complete aircraft landing run using computational fluid dynamic simulations carried in a realistic, transient manner. The results from this study provided a first peek into how the actual flow field around the aircraft and within the engine will be when the aircraft is landing with the VPF in reverse thrust mode. This is shown in the animations (Media2.mp4, Media3.mp4).

In the clip showing the aircraft, the coloured ribbons trace the airflow coming out of the fan in the engine inlet as the aircraft touches down and decelerates on the runway. In typical forward flow conditions, the ribbons from the fan would all be entering the engine and will not be visible outside the engine. However, in the reverse thrust mode, the flow comes swirling out of the fan, reaches the engine cover lip, and is turned back towards the engine exit. As the aircraft velocity reduces to below 40 knots, the reverse flow dramatically lifts-off the engine cover and exhibits a fascinating flow pattern, which we have named the ‘peacock-dance’ flow field. This reversing of the flow blocks the normal through flow into the engine and increases the decelerating force on the aircraft by interacting with the airflow around the aircraft.

The above clip shows a flow peek into what the flow is doing within the engine as the aircraft is decelerating with the VPF in reverse thrust mode. In the normal operating mode, all one would see in the same plot video would be a set of clean flow ribbons going through the fan in the right and exiting the engine at the bypass nozzle exit in the left, indicating normal flow development through the engine. However, with the reverse thrust engaged, a vivid picture of how the flow enters the engine through the exit(!) and flows out of the fan to eventually setup the peacock dance is seen as dazzling swirls of flow through the engine.

Through the realistic reverse thrust flow field details which have been obtained for the first time, we have identified and described several hitherto undescribed flow features and phenomena and have estimated the amount of decelerating force on the aircraft to demonstrate that the VPF can indeed develop sufficient reverse thrust to safely slow down the aircraft. Therefore, the reverse thrust VPF can be a key technology enabler and differentiator to aid future aviation climate neutrality by reducing aircraft mission fuel burn.

The path till today…

So far we have identified several areas of improvement in VPF reverse thrust operation and ten patents are in different stages of the filing process. The work has resulted in three journal publications, six conference proceedings, and four more manuscripts in advanced stages of preparation. Two publications from the work have achieved the merit of being awarded the prestigious American Society of Mechanical Engineers (ASME) / International Gas Turbine Institute (IGTI) John P. Davis Awards – unusually in two consecutive years in 2019 and 2020!

The John P. Davis award recognises works that describe new or continuing gas turbine applications and are judged to be of exceptional value to others. The awards are selected by considering works in the previous two years from the ASME Turbo Expo, the flagship gas turbine conference which receives more than 2000 papers each year. This is the first time in the Society records that the award is being conferred on the same recipients in two consecutive years! The links to the papers are provided below for interested readers.

The papers from the work have won the ASME Aircraft Engine Committee Best Paper Awards in 2019 and 2020 as well. The PhD thesis submitted from the work has also merited the distinction of receiving the Lord Kings Norton Medal 2021, the award that recognizes excellent work among doctoral candidates across schools in both the campuses of the University (Video link).

Additionally, the research work carried out at Cranfield has been showcased to senior leaders from both industry and academia. At present, we are looking to develop the technology further by extending our investigations to include experiments. 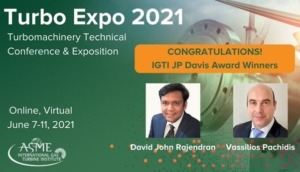