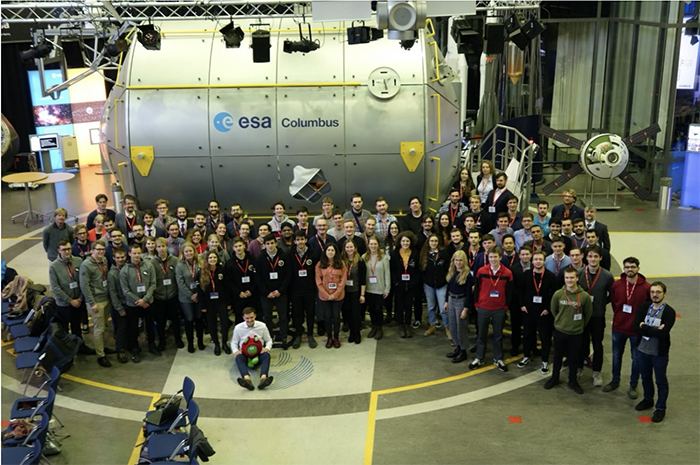 We are a team of seven students, five from the Cranfield MSc Astronautics and Space Engineering, one Cranfield’s PhD student in the space group and one PhD student from Exeter University (our worm experts-more later) in the UK.

We are really pleased to announce our selection at the student project REXUS/BEXUS organize by the German Aerospace Center (DLR) and the Swedish National Space Agency (SNSA). And thanks to a collaboration with the European Space Agency (ESA), this program is available for students in other European countries.

This story is to share our recent participation at the REXUS/BEXUS selection workshop where we defended our student experiment proposal to be flown on a large stratospheric balloon flight (remember Felix Baumgartner, the Red Bull jump from edge of space).

As part of his PhD studies, Aqeel Shamsul, and his supervisor (Prof David Cullen) with fellow students submitted a proposal to fly a version of a BAMMsat payload. BAMMsat stands for Bioscience, Astrobiology, Medicine and Material on CubeSat which is capable of hosting a range of biological payload. We aim to increase the technology readiness level of the BAMMsat payload to position us for better bidding of future space missions. Our vision is to enhance the access to space for future science on complex biological organisms. This knowledge is critical for the understanding of the impact of space environment over life on Earth to enable long-duration deep-space crewed missions. Most importantly, it also furthers our understanding of life on Earth which could be beneficial to human. For this flight, we proposed a repackaged version of the laboratory breadboard into a 2U CubeSat format and hosting complex life form like the C. Elegans (worms) as an example of a biological specimen. We aim to integrate that breadboard into a 2U pressurize compatible with the CubeSat standard and launch it on a BEXUS stratospheric balloon to test our ability to handle late access operation on a launch vehicle as this could be an issue. Indeed a launch campaign involving an alive biological payload for an orbital flight will be tricky. We will also test our ability to keep a nominal pressure and temperature inside the payload to keep the C.Elegans worms alive and finally our ability to observe and study the C.Elegans.

On 28th November 2019, we presented at ESTEC, the technical headquarter of the European Space Agency and defended our proposal plan to fly on the REXUS/BEXUS programme. The REXUS/BEXUS is a programme under a bilateral Agency Agreement between the German Aerospace Center (DLR) and the Swedish National Space Agency (SNSA). The Swedish share of the payload has been made available to students from other European countries through a collaboration with the European Space Agency (ESA). EuroLaunch, a cooperation between the Esrange Space Center of SSC and the Mobile Rocket Base (MORABA) of DLR, is responsible for the campaign management and operations of the launch vehicles. Experts from DLR, SSC, ZARM and ESA provide technical support to the student teams throughout the project. REXUS and BEXUS are launched from SSC, Esrange Space Center in northern Sweden.

A successful flight would greatly increase the technology readiness of the system and demonstrate to scientific community the capability of the BAMMsat platform to study complex organisms in space either as a standalone CubeSat or on-board larger spacecraft such as Bion satellite or the International Space Station. It would open a new range of capability for biological science experiment in space. The CubeSat could be launched in a lunar orbit outside of the protection of the terrestrial magnetic field or Van Allen Belt, it could be bolted on to the ISS or the upcoming Lunar Gateway or launch to any orbit where we want to study the impact on life.

It may seem at first sight it is obvious to perform such research, and you may think that it has already been done. An example would be a recent experiment on the ISS such as the Molecular Muscle Experiment (MME) run by Dr Tim Ethridge From Exeter University (Mike, one of our team member is also on the MME team!). However, access to space is still limited partly due to the launch cost, and also development cost of the hardware. We aim to improve access to space by reducing cost using commercial off the shelves component. To date, there has been limited study in space involving complex life form, especially on-board a bioCubeSat. We think that to confidently send astronauts for long duration mission to a Moon or Mars mission; we desperately need more data on the impact of not only microgravity but also of cosmic radiation.

On the 25th November 2019, we flew to Amsterdam, did some team building and, and on the 26th we sat at the REXUS/BEXUS student program presentation at the ERASMUS building full of legendary space hardware and model. This REXUS/BEXUS panel will select some teams from universities across Europe to fly their hardware either on a sounding rocket (REXUS) or a stratospheric balloon (BEXUS). It is truly an incredible opportunity for students to be able to run a project in real space mission like environment, going to all the process of space mission from design to launch in just one year and meet the representative of space organisations in Europe.

We presented our hardware on the 28th there along with 80 students in, front of a jury composed of executives from European Space Agency, DLR, SNSA, ESA, ZRAM, SSC, MORABA. They announced our selection for the launch of October 2020 this 9th of December.