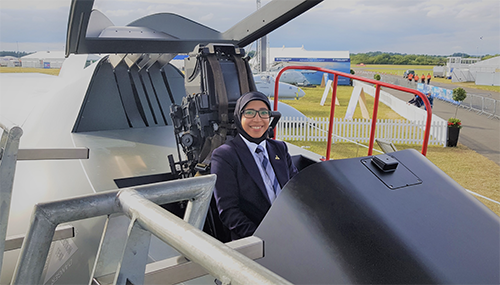 When I was about 12 years old, I saw a documentary on TV about aircraft and one of those aircraft was an F-16 Fighting Falcon. A few days later I had a dream that an F-16 has landed on top of my house, I got into the aircraft and I flew off. The dream was so vivid and exciting that since then, I decided that I wanted to learn about different systems in an aircraft. This has led to me working in my current role as an Aerospace Systems Engineer at Leonardo.

I spent my early teens researching and reading lots of books about aircraft. I knew that I needed to be good at maths and sciences at school to be able to study aerospace engineering at university. My mother used to help me with my homework when I was younger. My parents and siblings fully supported me in pursuing my dreams. I remember my siblings and I would play with toys like Meccano and build all sorts of crazy things!

I did a master’s degree at Cranfield University in Autonomous Vehicle Dynamics and Control, where I studied the technology behind unmanned air and ground vehicle systems.  This led me to a career where I have worked on some of the most iconic modern day aircraft. Some of the projects I have worked on have included combat aircraft ejection systems, UAV systems, helicopters, human powered aircraft and autonomous cars.

At Leonardo, I am currently working within Team Tempest. I use my engineering knowledge and experience to help develop futuristic radar and sensors technology. This is one of the most exciting engineering projects to be taking place over the coming decades and I am very proud to be part of it!

I believe that anyone can become an engineer to make sci-fi a reality for the better world of the future!