Almost everyone must have experienced a flight delay or cancellation and wondered – what causes this? While affecting both the passengers and the airline, a delayed or cancelled flight also has a big impact on the environment. An aircraft not taking off on time occupies a parking space in the airport, preventing the next flight from landing. This results in aircraft loitering as they wait for landing clearance. A build-up in air traffic congestion, due to these delays, leads to excess fuel burn, emitting unwanted exhaust gases, adding to the carbon footprint.

Preventive Health Check-up for the aircraft

One of the significant contributors for delayed flights is an unexpected (surprise) fault in an aircraft system. The aircraft industry has been focusing on reducing the occurrence of unexpected faults with the help of Integrated Vehicle Health Management (IVHM). The field of IVHM develops and employs diagnostic and prognostic technologies to monitor and predict the health of aircraft systems. In this way, maintenance for a particular system can be scheduled based on its health, rather than depending only on periodic maintenance. This concept is akin to the preventative medical screening provided by healthcare providers to detect the presence of any factors contributing to critical health issues. 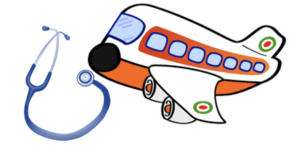 An aircraft is a complex machine comprising of multiple systems that are complicated in their own way. The aircraft systems (e.g. engine) are usually supplied by specialised manufacturers (e.g. Rolls Royce or GE) and assembled together by the airframe manufacturers (e.g. Airbus or Boeing). These suppliers have their own health monitoring methods and maintenance practices customised for their systems and in-built components. To complement these practises there are a number of research works focused on developing advanced health monitoring techniques at the component and system levels of the aircraft.

While the aircraft systems are developed in silos, they are designed to interact with each other for the efficient functioning of the aircraft. Due to these interactions, faults occurring in one system could cascade to other systems and affect them at an unexpected time. These cascading faults are one of the contributors of surprise faults leading to unscheduled maintenance, flight delays, and cancellations. Troubleshooting such cascading faults, using health monitoring technologies specialised to individual systems, might be time-consuming, complicated, and incorrect. Hence, a Framework for Aerospace Vehicle Reasoning (FAVER) has been developed, to identify the root cause of cascading faults and predict their effects on multiple systems.

For demonstrations, four critical aircraft systems that interact with each other are chosen. FAVER consists of their digital twins (virtual representations) and their individual system diagnostics. FAVER also has a layer built with necessary expert knowledge and algorithms required to analyse the health information from all the systems and reason through them.

FAVER can identify the root cause of the faults, even if they originate from the interacting systems and predict their cascading effects on other systems in advance. In a human body example, let’s consider the patient has a tickle in their throat and a dry cough. While this is usually caused by hay fever or a throat infection, this symptom could also have an indirect cause such as acid reflux. Such indirect causes can be diagnosed by doctors, by learning about the other existing conditions in the body. In a similar manner, let us consider a problem in the air conditioning unit of the aircraft, which is caused as a result of a fault in the engine. FAVER can identify the root cause to be in the engine and also its other cascading effects, with the help of its expert knowledge and reasoning algorithms.

The results of FAVER are easily interpreted by its users, thus saving the time involved in troubleshooting cascading faults and any consequential unscheduled maintenance. FAVER has been developed in such a way that it can easily be expanded to include more aircraft systems or replace the existing ones with more advanced models. Hence FAVER is capable of being adapted to new generations of aircraft in the future and ensure their on-time flying.

FAVER is a building block of the IVHM Centre’s aspirational Conscious Aircraft, a concept which is being created to bring step-change improvements in operational efficiency and sustainability to the industry.