It all happened so fast! I went from dreaming about it to living it. The lockdown in Uganda gave me two whole years to think about what I wanted to do in my next stage of life. I came out of it knowing that I wanted to study water and sanitation for sure but no school in Uganda offered the exact course that I wanted. During that time one of my primary school friends shared the Commonwealth Shared Scholarship link on a WhatsApp group, I followed the link because I saw water and sanitation listed on the courses at Cranfield University. I began the application process in November 2021 and committed to finishing it before the deadline.

As tasking as graduate school applications are, applying to Cranfield University was easier because I got the support that I needed without even asking for it. All the information I needed was provided and I got timely reminders for the instances that I seemed to lag behind. At the same time, I was writing my application to the Commonwealth Scholarship Commission, it took me weeks to write and finally submit it.

By the time I got the offer to study from the university in December 2021, I started to seriously think about travel documents, because I had never travelled out of my home country. I made steps to apply for a passport as I waited to be nominated by Cranfield University. Then, I got a major setback in March 2022 when I received an email from student funding saying that I had not been nominated but was listed reserve for the scholarship. At that point, I halted the passport application and decided that I would keep my place on the reserve list with the hope that one of the nominated candidates would decline their offer and upgrades would be made in my favour. 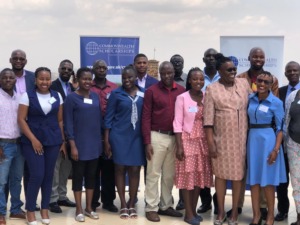 Indeed, in June 2022, I was advised that one of the candidates had declined their offer and so I was being offered the scholarship. I then resumed my passport application and began to tune my mind to travel to the UK. The preparations were even more tasking than the applications because it required me to move across districts to get to the capital city for the passport and visa to be processed and to have necessary medical tests done pre-departure.

It was hard to leave my family behind being a primary caregiver for some of them. My first days in the UK were fast-paced, I loved the fact that guidelines for international students were given by the university during the application period on the things to do when you arrive, so I was able to register and get into my student accommodation smoothly. 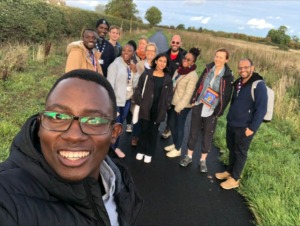 The first two and half months in class were insightful and so much fun. The one element of the course that I have enjoyed the most so far is the drilling week. It brought together delegates from all over the world representing internationally recognised companies and organisations. As a student with zero experience in drilling a borehole (I studied BSc Public Health at undergraduate), I got the chance to learn and see first-hand how to properly drill a borehole and I got to interact and make connections with the delegates.

The drilling week was so relevant for me because most of the rural communities in Uganda rely on groundwater as the primary source of safe water for drinking and other domestic activities, so boreholes are quite popular there.

Before coming to the UK, I used to volunteer at the District Local Government of Soroti in Uganda. Together with a team of other volunteers and health workers we worked to scale up water and sanitation coverage in about 26 villages in 3 months through health education and intensive follow-up employing an approach called CLTS. I was never involved in the engineering aspect of it but coming to Cranfield got me involved. I have found myself studying water resources engineering, designing, and costing an actual borehole, designing a gravity water supply conduction line and assembling a 10m3 tank.

My Public Health BSc in Uganda covered a wide range of public health issues like epidemiology, microbiology, maternal and child health, urban and rural water supply, among others. The most I knew about water supply was spring protection and improvement of existing water sources and mostly improving sanitation coverage in rural communities having volunteered with Global Sanitation Fund just after my undergraduate.

In many instances we have guest lecturers from reputable organisations coming to share their expertise with us. For me, the fact that most of them are open to connect and share personal experiences and are so willing to help us is so amazing because the relationships we are making now with everyone we meet are for life, more so the knowledge gained from the interactions. I also had the chance to travel to London a couple of times on the weekends. I visited the Natural History Museum, the Science Museum and the Victoria and Albert Museum, they are magnificent, unlike anything I have ever seen before. The experience of using a train for the first time is another story altogether, the anxiety of getting lost was the worst for me!

Touring the Emirates stadium was the best part of 2022 for me, funny how I have never loved football but visiting the Arsenal FC stadium meant a lot for my family and friends, for them it was like they had also been there because I visited. I still can’t get over the feeling of being there, however it rained the whole day. But I was determined to get there and see as many things as possible, I made it a point to take a photo in the dressing room of the players, I loved it there.

The one thing that I struggled with in the first few days is adjusting to the weather. Coming from temperatures of 25˚C – 30˚C to as low as -5˚C, initially I just wanted to stay indoors, but I have now adjusted to the cold so much so that 10˚C feels like heaven! Overall, I am having a good time living on campus, I don’t have to take a bus every morning, because most lecture rooms are a 5-10 minute walk from my accommodation.

Studying in Cranfield and living in the UK so far has been great with a lot of ‘first times’; in this, having an open mind and asking for help whenever I wasn’t sure of what to do has been helpful because even if someone cannot help you, they can signpost you to who can help.

Cranfield University has exposed my mind to realistically reflect on current issues in the water sector. I have been challenged to think critically about public health issues and how as a water science professional I have a responsibility to contribute to developing future solutions for water and sanitation, knowing that water and sanitation alone can improve health, development, climate change, nutrition, and education among others. It had to be Cranfield for me! I have been involved in conversations touching on the development of nations, new innovative technologies for water and sanitation, policy, and regulation changes, thanks to the people I have met so far during the course.