LSCM and PSCM does Christmas!

It’s Christmas!!!
The time has finally arrived! Considering just how busy we’ve all been, we’ve actually managed to fit in quite a lot – Christmas Jumper Fridays, a Winter Formal, Secret Santa and even a snowball fight.

The Third Friday of December may just be like any other day to you but traditionally – or so the Telegraph says – it is the official day of Christmas Jumper wearing. So, what did we say? We said forget the rules, it’s Christmas, Logistics and Supply Chain Management (LSCM) and Procurement and Supply Chain Management (PSCM) students will have Christmas Jumper day every Friday! To those that made the effort GOLD STAR! For those that didn’t want to invest in the novelty attire or weren’t quite sure what a Christmas Jumper even was, here’s the rundown for you.

Christmas jumpers have gained huge popularity in recent years but they can be traced all the way back to the late 1800s in Scandinavia and Iceland where they were worn by fishermen. They were then adopted as popular attire by skiers and have grown to be very popular with their different patterns and colourful prints. Today, people can’t get enough of Christmas Jumpers with the number one rule being ‘the uglier, the better’. Celebrities from Taylor Swift to Matt Damon to Snopp Dogg have been seen wearing them. And who could forget, the romcom meet cute of the century with Mark Darcy and Bridget Jones? (If you haven’t seen Bridget Jones’ Diary yet, then what have you been doing with all your spare time in-between SCSS and ACF?! This is all part of the UK experience people!). Even designers such as Ralph Lauren and Stella McCartney have released their own variations with price tags of £785 and £755. It is estimated that £220 million will be spent on Christmas Jumpers before the big day on the 25th. Not to worry though because cheaper variations can be found in the likes of Tesco, Primark and local high street stores at a much more reasonable price of around £10, a bargain but still with all the bells, whistles and lights you could ever want! And remember, a Christmas Jumper isn’t just for Christmas Day. This year, in an article by the Guardian, they found that there are at least 36 days of the year in which it is appropriate to wear a Christmas jumper. Okay, so they are throughout the month of December, going into the start of January but if you’re only spending a tenner you’ll definitely get your money’s worth! Grab a bargain in the Boxing Day sales and be fully prepared for next year to spread that festive cheer!!!!

On the 2nd December, we hosted our Winter Formal Christmas Do. It was so lovely to see everyone all dressed up in their suits and dresses. There was a great turnout with nearly everyone from LSCM and PSCM getting dressed up in their finery. Not to mention the members of faculty that joined us for our festive Saturday night too. Christmas parties take place up and down the country in the month of December with friends, working offices and school children dressing up and celebrating over a traditional Christmas dinner/lunch. 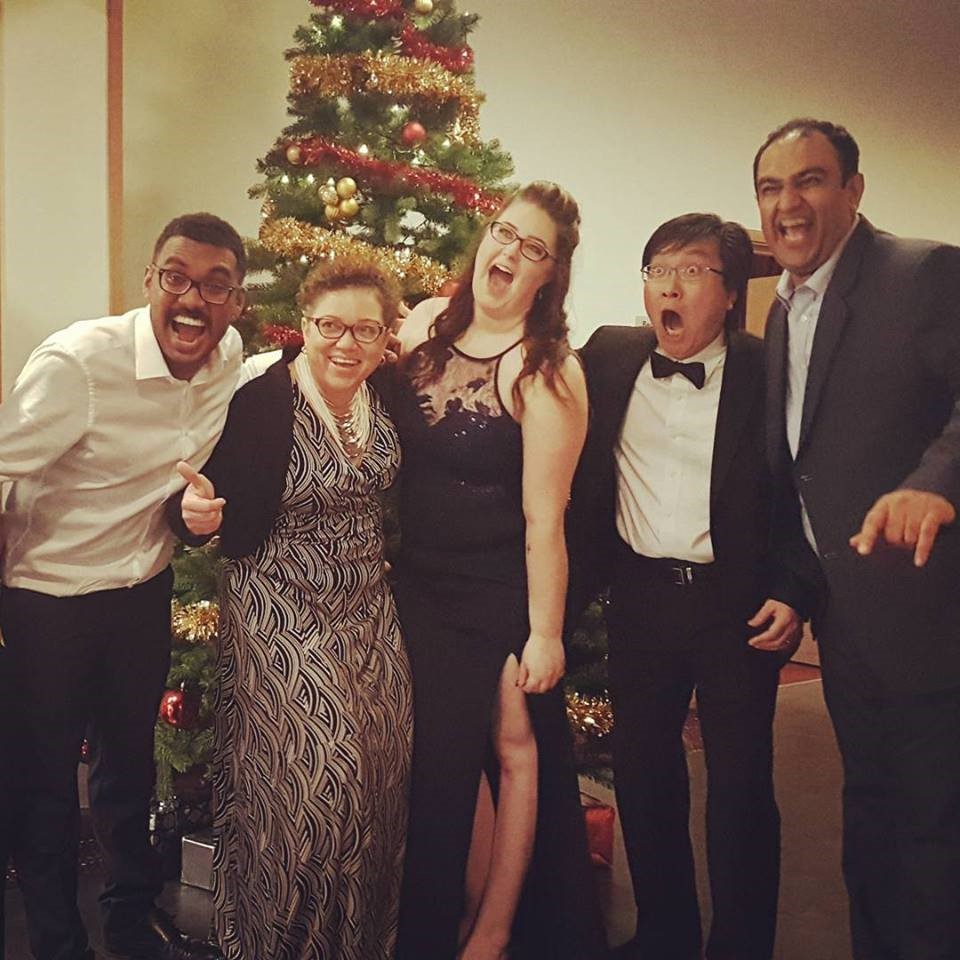 We started the night with drinks on arrival and enjoyed mulled wine, a traditional warm beverage guzzled up by the Brits during the cold winter months. The drink became very popular in the UK during the Victorian period thanks to the literary works of Charles Dickens and his depiction of a spiced wine called ‘Smoking Bishop’. Today, it is a popular drink all over the world but with its own local variations such as Gluhwein (Germany), Nordic Glogg (Scandanavia), Vin Chaud (France), Izvar (Moldova) and Caribou (Canada) to name a few.

Next up, we sat down to a fantastic three course meal. As is typical in the UK, Christmas dinner consists of a Turkey roast with all the trimmings of parsnips, cabbage, carrots and of course, the dreaded Brussel sprout, the veg that Britons love to hate! And the list doesn’t end there, Christmas dinner would not be the same without Pigs in Blankets (sausages wrapped in bacon), roast potatoes (Aunt Bessie’s in duck fat are a must even if I do say so myself), stuffing, sausage meat and all topped off with a healthy helping of cranberry sauce, bread sauce and gravy! In more recent years, goose, duck and even fish has become a festive alternative to the traditional turkey. Many supermarkets offer a three-bird roast but Aldi took it one step further when they brought their five-bird roast to market which is made up of turkey, duck, goose, pheasant and chicken layered with pork, clementine and cranberry stuffing, topped with bacon and a port and cranberry glaze. 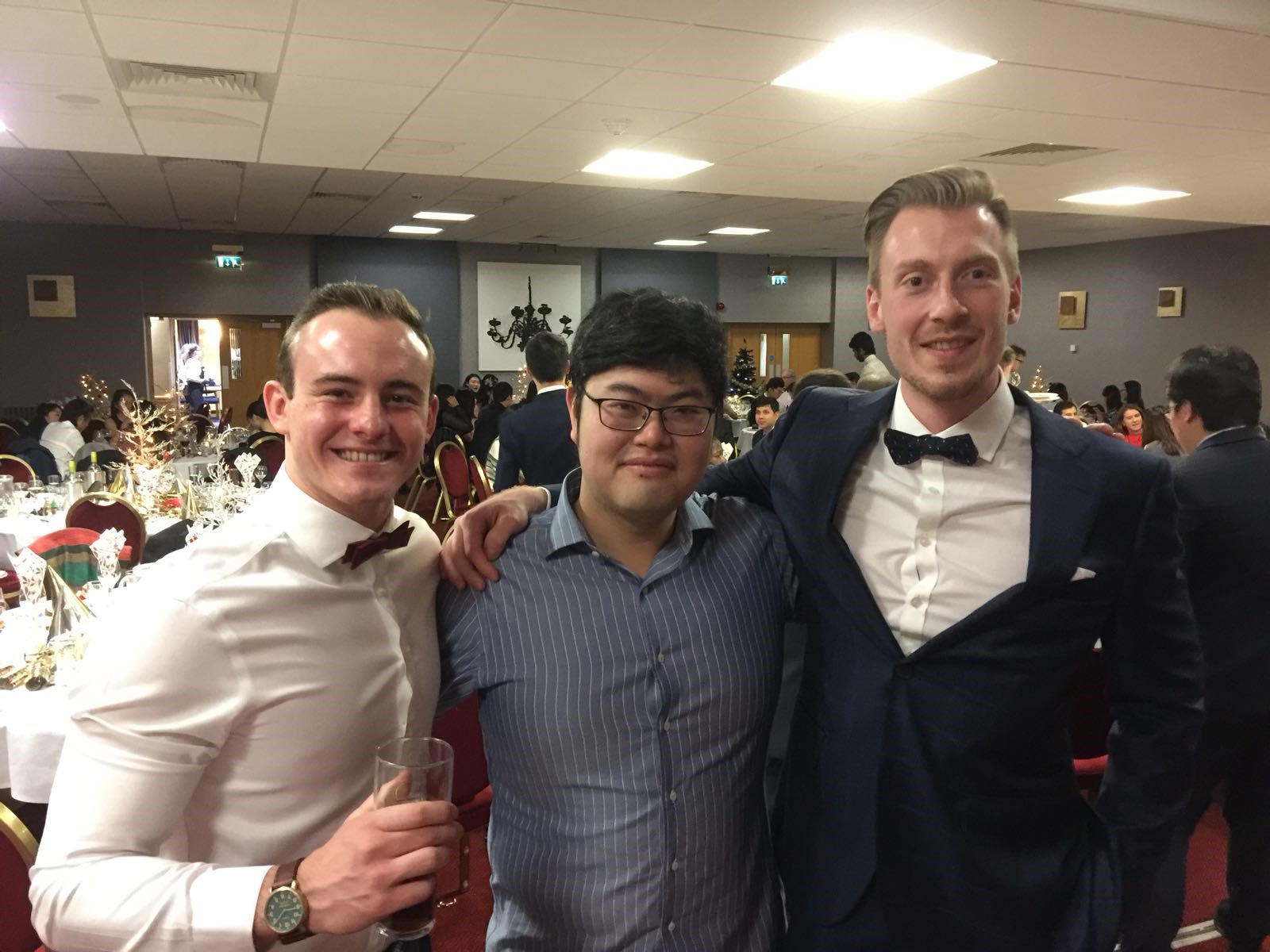 Christmas pudding, which we were also treated to on the night, is another traditional desert served at Christmas. Christmas pudding, otherwise known as plum pudding, would be made on a day known as ‘Stir up Sunday’. It is a boiled pudding made with lots of dried fruit and is infused with brandy in the months leading up to Christmas. Historically, a silver coin would be mixed up within the pudding and the person who found it in their share would be subject to good fortune for the coming year. Every year the Queen gifts all of her staff a Christmas Pudding, a tradition that was started by her Grandfather, King George V. This year it is rumoured she bought hers from Tesco – I did wonder why they were all sold out at Kingston! 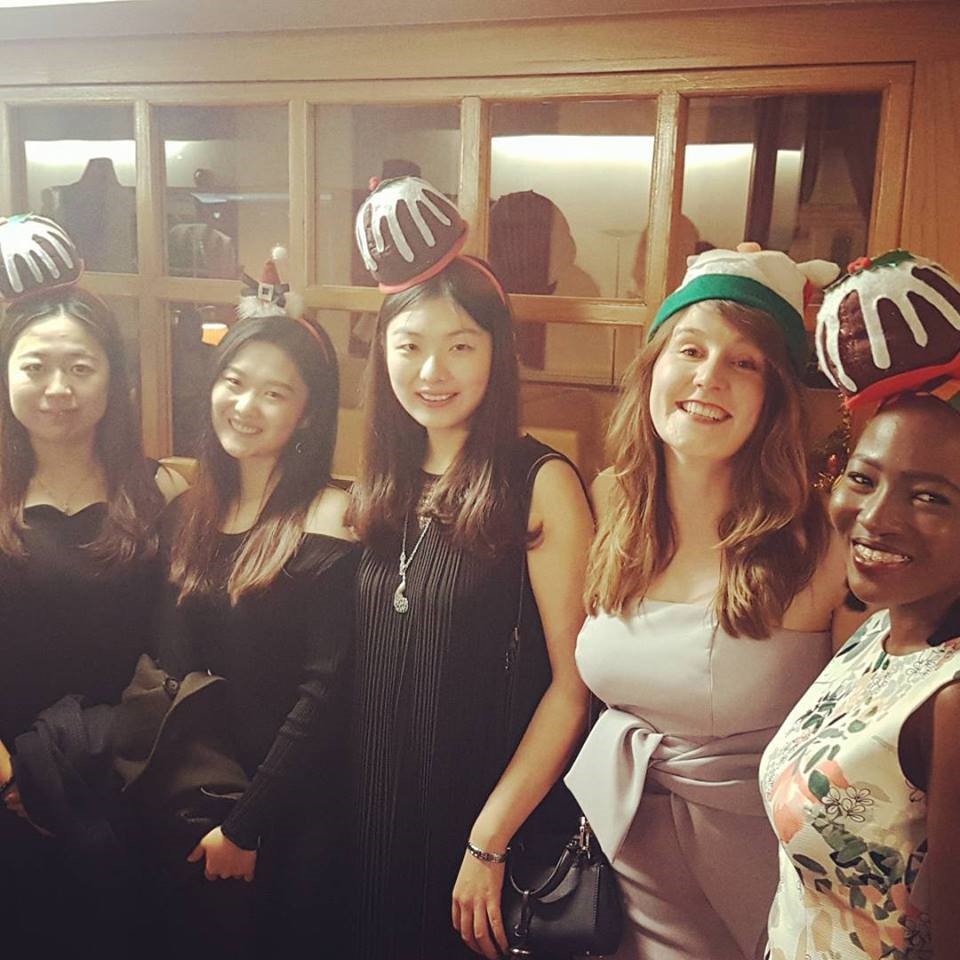 Finally, our meal was concluded with mmmmm delicious mince pies. I’ll be honest, I’m not really sure who in the UK likes these, but we have to eat them. It’s tradition. During the Stuart and Georgian times, mince pies were eaten by the rich as a symbol of wealth. Again, these are similar to Christmas pudding as they are filled with dried fruit and encased in a sweet pie. Mince pies are typically put out on Christmas eve by children with a glass of milk for Santa and some carrots for the reindeer. With the majority of children doing this for him across the country, it’s a wonder he can get down the chimney. 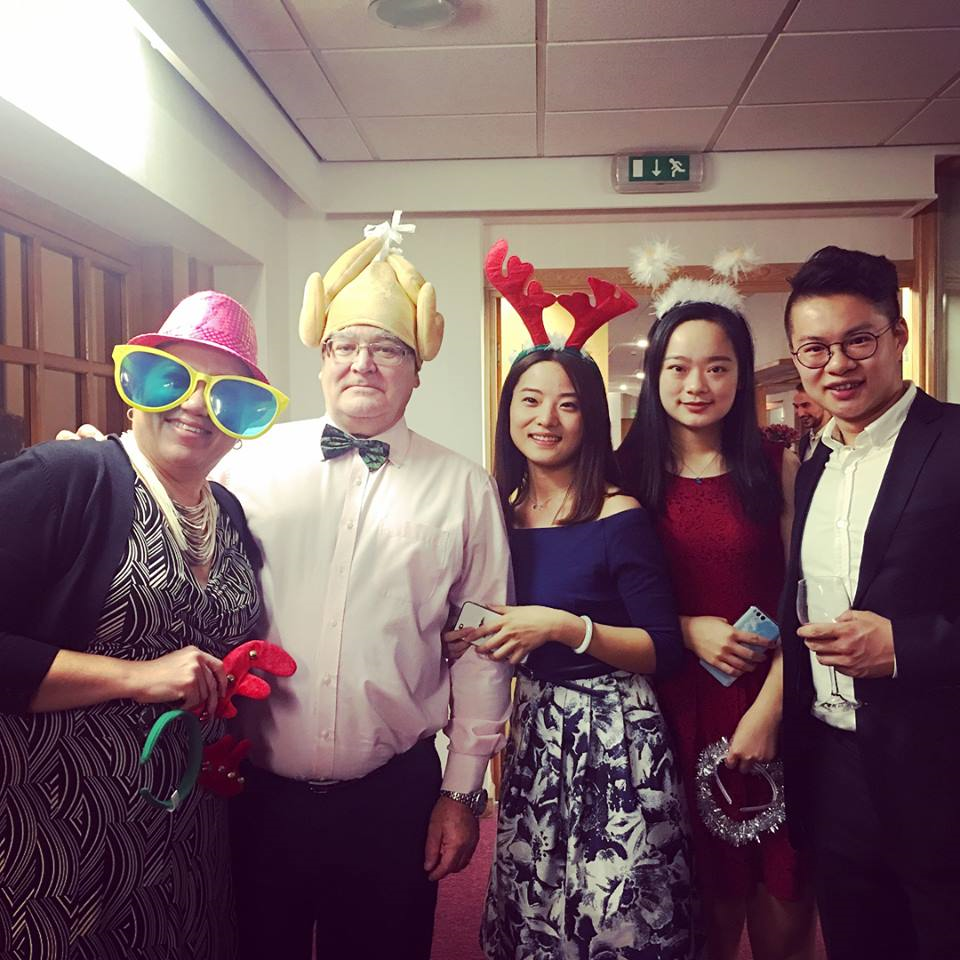 In-between all the comings and goings of our brilliant serving staff, we were able to cut some shapes, courtesy of a great DJ, and take some fab photos in our photo booth for the night – it was great to see everyone getting involved. So much fun to be dressing up as reindeer and Christmas puddings to have our photos taken to the soundtrack of Mariah Carey and the Pogues. Not only that but we also managed to squeeze in Secret Santa, the giving of gifts without the identity of the giver being revealed. Some great gifts were shared including Christmas jumpers, Christmas socks, Christmas hats, chocolates, diaries, paints and paint brushes and mugs. For those still standing at the end of the night, a last-minute Indian disco was thrown together to celebrate Viraj’s upcoming nuptials for those that couldn’t make the trip to Mumbai over Christmas. 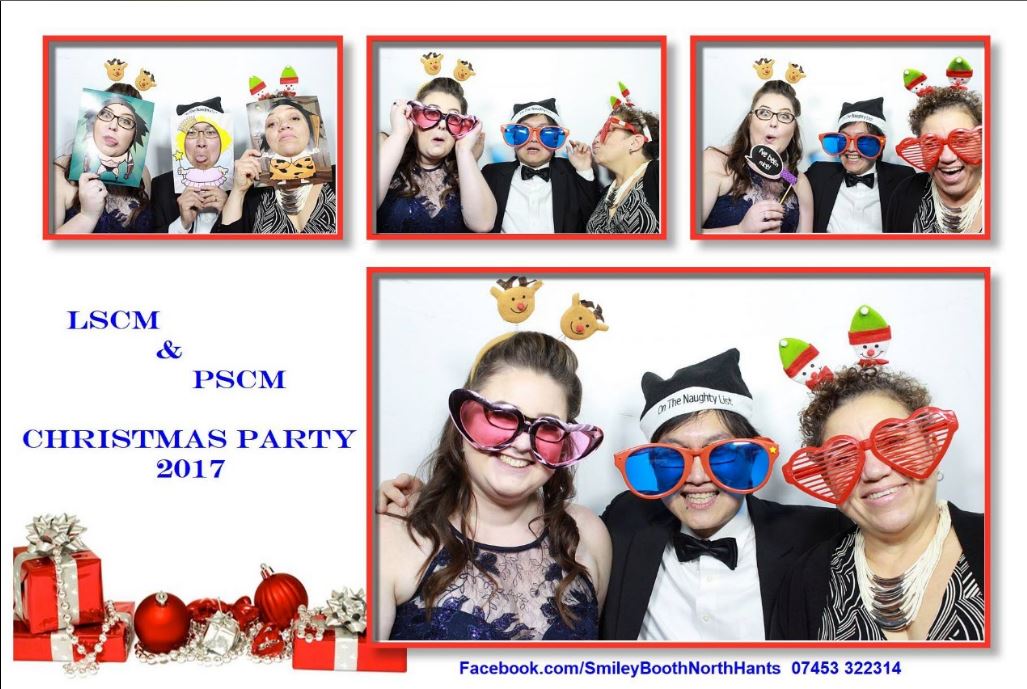 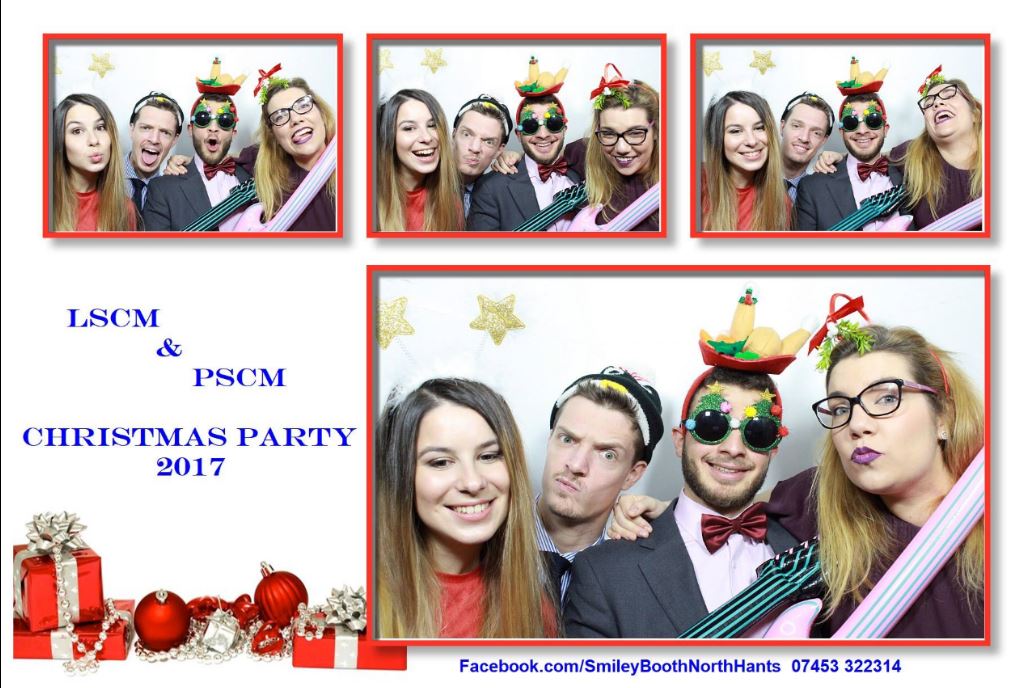 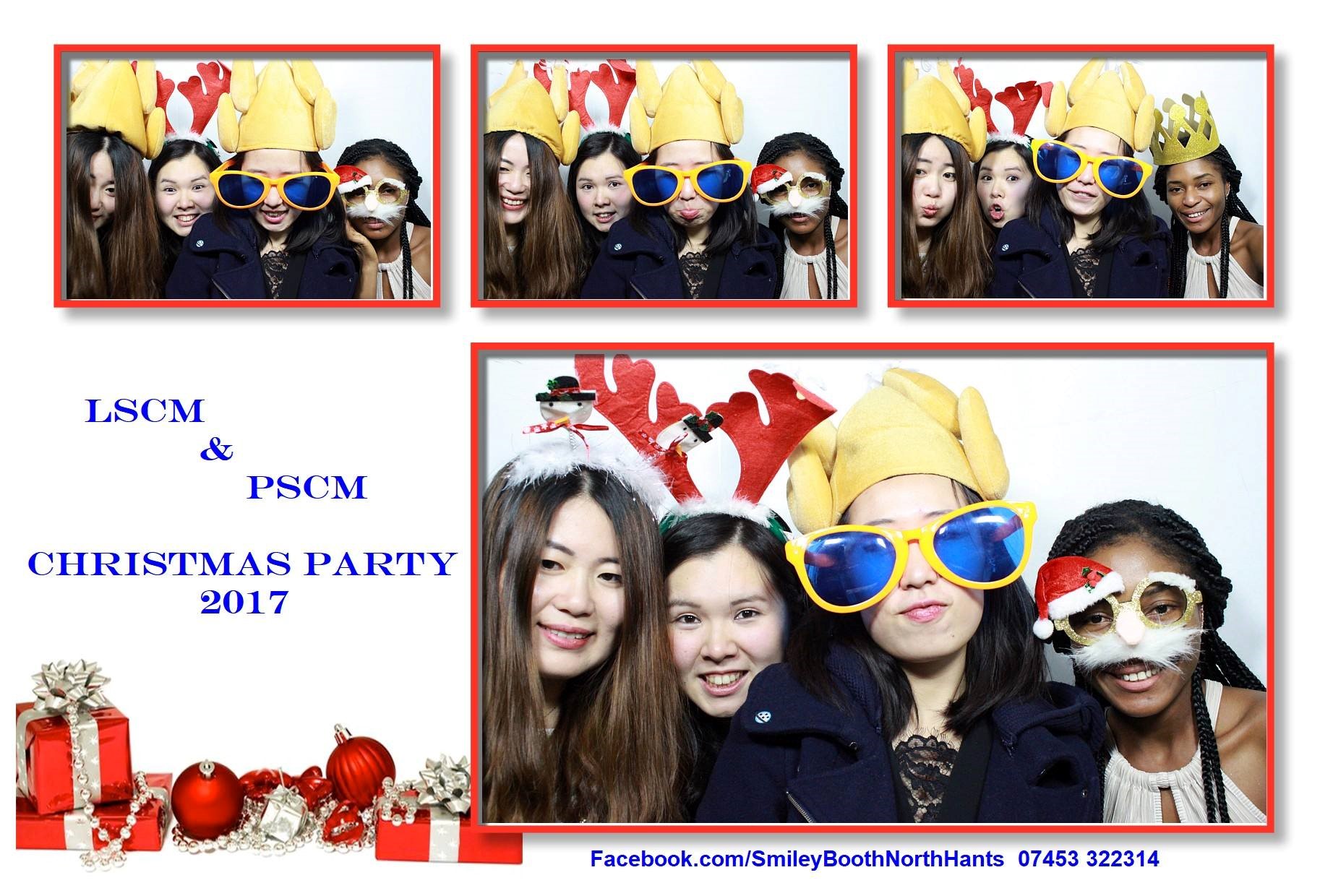 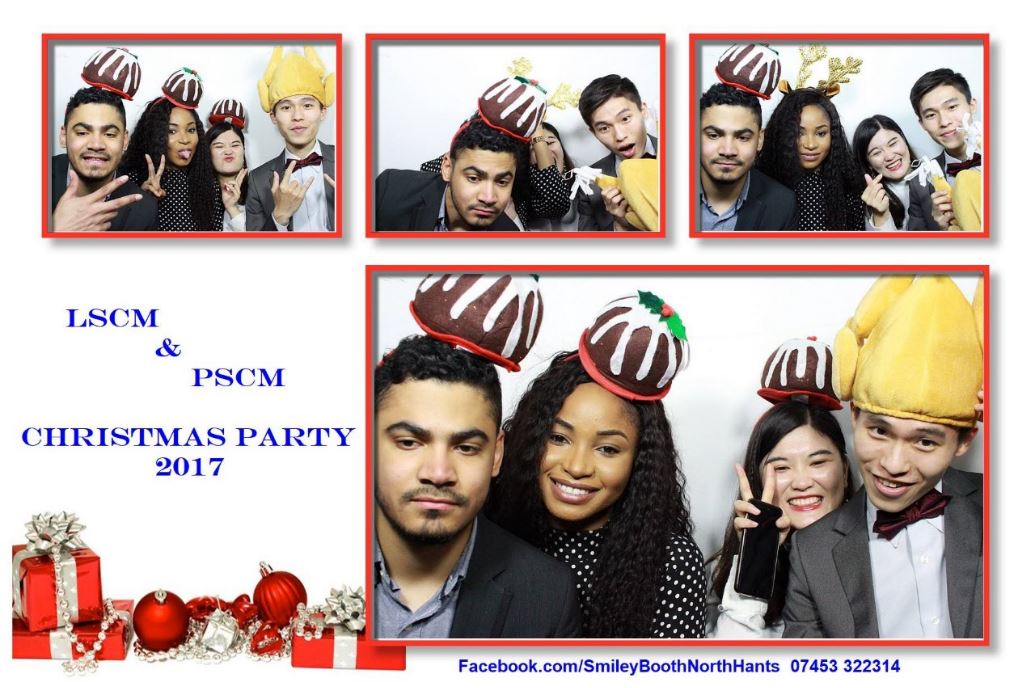 To everyone making the trip home to spend the Christmas period with their families, I wish you a great get together filled with celebrations and to those sightseeing and exploring, I wish you safe travels. All the best for the Christmas period, have a fantastic New Year, or Hogmanay as its known in Scotland, and I’ll see you all again in 2018!

Why we love John Lewis at Christmas: The psychology behind festive adverts