Drones in the Cumbria skies: the floods of Christmas

Christmas 2015 will not be remembered as a white Christmas, but as a wet one. The media was full of images of the homes ruined by floods, particularly in Cumbria, as a result of winter storms and heavy rainfall. As an expert in flood risk management, I visited Cockermouth, one of the worst affected areas, to see the damage for myself.

I conducted a survey with drones or ‘unmanned aerial vehicles’ which allowed me and my team to identify with high accuracy the flood extent and damage.

The areas we visited were completely devastated in the aftermath of the floods. Many people lost the contents of their homes. The emergency services, including firemen, the police and the army, were on site to provide support and aid to the local people. Roads had debris scattered all along them for miles, and some bridges had totally or partially collapsed. Soil movement had exposed pipes and drainage systems to the elements. In the midst of this, the local residents were laboriously cleaning their homes, unaware that storms Eva and Frank were on the horizon and they would be at risk again.

Within the difficult context of severe flooding, drones have the potential to help researchers to map with very high accuracy the extent and damage of the flood event. Unlike other options (such as satellite imaging) they can be rapidly, inexpensively, and flexibly deployed. Their ability to scout areas reduces distortion caused by building shadows or atmospheric conditions like cloud or pollution. Their immediacy can also help to deploy emergency resources where and when they are most needed, helping isolated communities or directing efforts to protect properties or infrastructure. 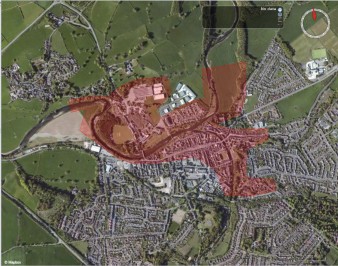 Taking to the skies in Cockermouth was part of a new research project funded by NERC which brings together commercial flood modelling and risk specialists Ambiental Ltd with academic expertise from Cranfield University as well as colleagues from the University of Leicester, Loughborough University and Imperial College London.

UAV imagery was collected in collaboration with Caintech Ltd (following Civil Aviation Authority legislation at all times.) This is the first time CAA has given permission to carry out survey works over any congested space in the UK with a range of 1000m from the pilot and up to a potential altitude of 400ft AGL. From a research point of view, this was an unprecedented opportunity to apply our ideas to a real world situation.

While the flooding in the UK has focussed our attentions on our changing climate and resilience to environmental disaster, the implications are international. With reports that El Nino will make flooding more common, and the impacts on some of the most vulnerable communities of our world likely to be great, drones could help with emergency responses and flood risk management planning in both the short and long term.

If you’d like to find out more about the use of new technologies for environmental management, you might be interested in my two week UAVs for Environmental Monitoring course, or the Cranfield MSc in Environmental Risk Management.

Media coverage of this project

Next Post
Reviving UK manufacturing – is cross-sector collaboration the answer?

Dr Monica Rivas Casado is a Lecturer in Applied Environmental Statistics in the Cranfield University Institute for Environment, Health, Risks and Futures. She has expertise in the application of statistics to environmental data. She has focused her research on the integration of emerging technologies, advanced statistics (modelling of spatio-temporal processes and spatial structure analysis) and environmental engineering for the design of robust monitoring strategies. She is currently leading Research Council (RCUK) and industry funded projects on the use of emerging technologies and statistical science for robust environmental monitoring. This includes drones for flood extent mapping and damage assessment, robust hydromorphological characterisation and floodplain forest restoration monitoring. Further research activity includes underwater vehicles for coral reef habitat identification, as well as radio controlled and autonomous boats for freshwater ecosystem monitoring.