This was my second staff tour, and I found it as fascinating as the first. Dr Ali Mehmanparast is the manager of the lab, which sits within the University’s Energy and Power theme. He joined Cranfield three years ago, after a decade of studying and working at Imperial College London. His research interests include fracture mechanics, structural design and integrity, and life prediction and extension of engineering components and structures. He told us all about the work that goes on in the lab, and it was very interesting to see for ourselves the instruments and machinery used, and to hear all about them from someone so knowledgeable.

The main work that goes on is the mechanical testing of engineering materials – mainly metals and composites (a combination of two or more different materials). We saw several huge machines, including one that can bear 250 tons of weight under dynamic loading conditions. This means that tests can be done on actual components, rather than lab scale versions. Ali explained that the lab is one of the biggest of its kind in the UK, and once the planned extension work is complete, it will be the biggest.

The bulk of the work done in the lab is to do with offshore wind (wind turbines in the sea). This is a very new technology and so a lot of research is required. The UK is a global leader in this industry – last year we produced more than 5GW of electricity from offshore wind. However it is also one of the most expensive renewable energy sources, so the industry needs to reduce costs by optimising design and improving the structural integrity of offshore wind turbines. 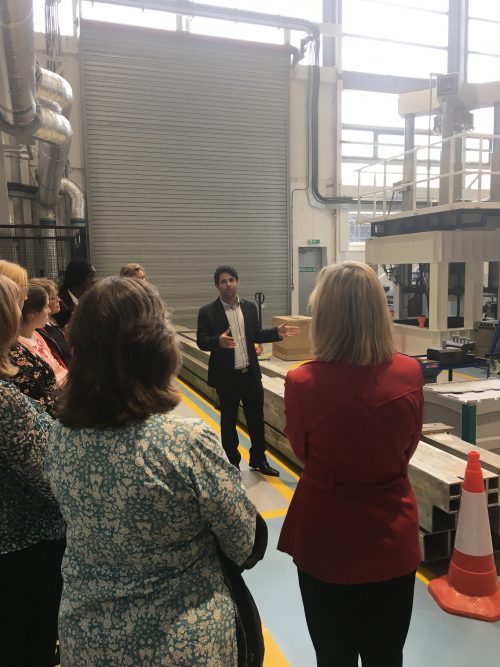 We heard all about a £3 million joint industry project (JIP) called SLIC (Structural Lifecycle Industry Collaboration), which was funded by a consortium of offshore wind operators. Researchers investigated the extreme forces that offshore turbines are subject to – wind, waves and current – which lead to fatigue and corrosion damage. Tens of tests were repeated under different loading conditions by contributing laboratories until the material failed. New design standards will be soon set for the foundation structures, which will ensure that these huge turbines (they are several times larger than onshore turbines) will be safe and cost effective to operate. We also saw a very interesting piece of kit used to test the corrosive effect of seawater – cracks tend to grow several times faster in seawater, a key consideration for offshore wind turbine life assessments.

The lab is also home to the REMS (Renewable Energy Marine Structures) Centre for Doctoral Training. In association with Oxford University, the aim is to train 50 PhD and EngD students over eight years. Consulting work for industry is also important to the lab, and this is how much of the equipment has been funded. They will also store and test decommissioned structures, as they can tell us a lot about the behaviour of the material after it has been used and aged in a real situation.

Last but not least the lab can also undertake non-destructive testing – this is where the crack size of components is estimated without destruction. The aim is to extend the life of the component, saving money as the crack can be repaired or allowed to grow until the point at which it would be unsafe.

It’s good to know that top minds are working hard to ensure the safety of the huge structures around us! You can also read more information about the lab on our website…

Next Post
Do you know how green your car is? Why measurement of low-emission vehicles is misleading…

Emma Turner is the Information Specialist for Aerospace and is based in the Kings Norton Library.

My life as an engineer

After completing her PhD in laser processing at Cranfield, Sonia joined the University as a