How’s the weather for flying? Open doors staff tour to the FAAM

Visiting an airport always gives me a thrill. Today I wasn’t leaving one to fly to sunny shores, instead I found myself at Cranfield Airport’s Hangar 1 with 10 others ready to learn about the Facility for Airborne Atmospheric Measurements (FAAM), a world-class research facility dedicated to the advancement of atmospheric science.

My visit was part of Cranfield’s open doors staff tours which offer an opportunity for colleagues to see and hear about what goes on inside some of the University’s facilities that they wouldn’t normally visit.

Alan Woolley, Head of FAAM, showed us around their ground facility, before walking us into the hangar which the FAAM aircraft dominated. Describing it as a place where ‘science takes flight’, the aircraft is jointly owned and run by NERC (Natural Environment Research Council) and the Met Office and is based at Cranfield. 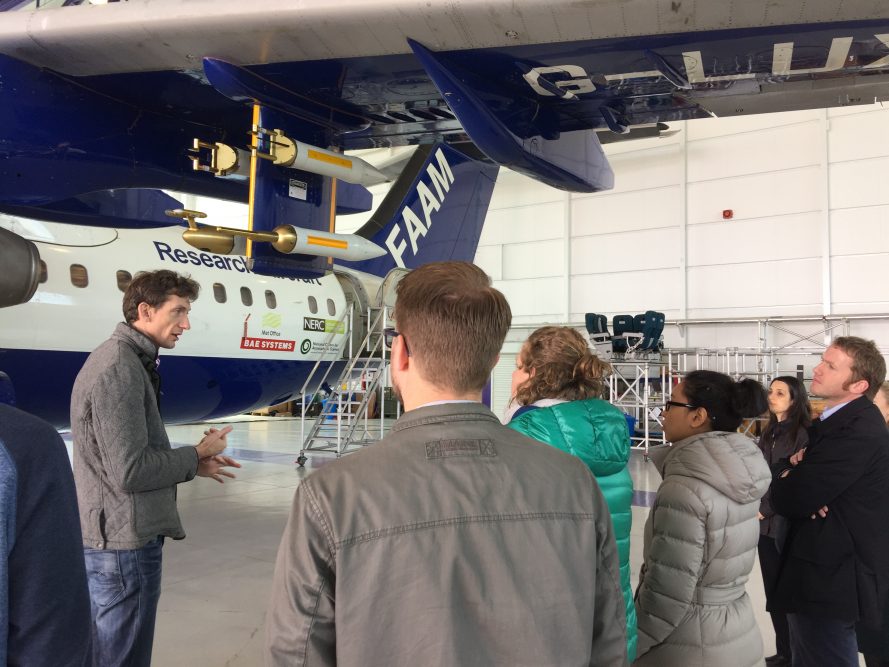 A modified BAe 146-301, the aeroplane is unique and the largest of its type in Europe. It is a specially modified research aircraft managed by a team of scientists, engineers, flight technicians and project managers, giving a complete package of support for the atmospheric science community.

Its primary function is to look at clouds, specifically at raindrops. The aircraft measures temperature, humidity and air pressure, collecting samples during flight to measure and make comparisons with other reported data from other aircraft. This information helps inform the Met Office and helps to improve weather forecasts.

Flying about 400 hours a year, with missions averaging five hours each, the FAAM team finds itself in exotic and remote places such as Africa, Brazil, the rainforest, India and Alaska conducting all sorts of atmospheric tests. At the time of our tour, they were preparing for a visit to Germany to look at pollution levels and their next long mission is to the Ascension Islands in August.

When aboard the aircraft, the real difference hits you. It has been completely stripped of the traditional aircraft interior, bar a few seats and the toilet (!), allowing it to be fitted with vast amounts of research equipment and computers. These are modular so the equipment can be adapted depending on the mission and data to be collected. It can hold as much as four tonnes of equipment, and with all the researchers, support staff and crew, it can be a tight squeeze! 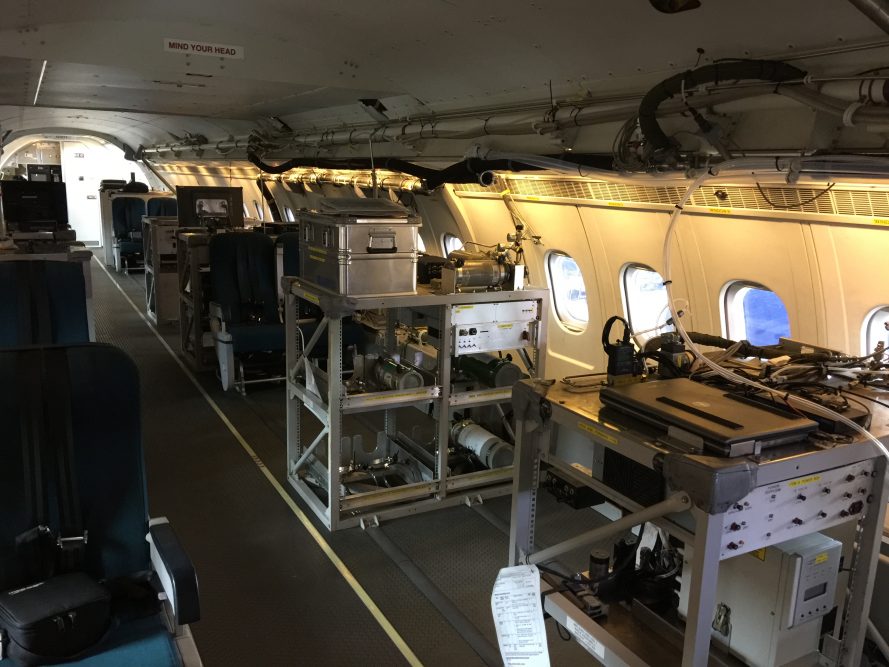 When travelling to long-distance locations, it often has to fly in stages, stopping-off several times, meaning the entire journey may take several days.

The pilots are generally ex-military, with formation flying expertise, so they have practice of low-level flying. This is necessary for low-altitude flying over the sea which the FAAM team often find themselves doing. Sometimes measurements are taken as low as 50ft over the ocean. If you suffer from travel sickness, this certainly isn’t the flight for you; on some occasions the turbulence can be so severe that it’s not possible to type on a keyboard.

Back in 2010 when the Eyjafjallajökull volcanic erupted in Iceland, a plume of volcanic ash was ejected several kilometres into the atmosphere, potentially causing a hazard for aeroplanes. The ash cloud caused flight chaos, disrupting European air-space for six days.

The FAAM plane was the only aircraft allowed to fly during this time. It flew at 35,000ft, so above the ash cloud, and was sent to confirm where the worst of the ash was located and validate Met Office calculations.

Back in 2012, the team was called upon to take measurements of methane concentrates in the air following the Total Elgin gas platform leak. The closure of the platform cost a staggering £11million a day in lost revenue for the UK.

It really was a fascinating tour and I feel proud to work in such an interesting environment. It gave us a great insight into the projects that FAAM gets involved with, not just supporting weather forecasting, but all emissions in the air, even if we can’t see them. Next time I wonder about the weather, I’ll think about the team at FAAM.

Next Post
Improving study space in the Kings Norton Library

Denise Bigwood is Senior Media Relations Manager. Her role is to manage press enquiries and external news across the University working with academics, business partners, external companies and support staff to both promote and protect Cranfield’s reputation in broadcast and printed media.

Welcome back to my next blog post! I will tell you about my 80 credit,