A look inside the Operations Excellence labs

On the lunchtime of 22nd February I joined a shivering throng of colleagues across campus, to take part in an ‘Open Doors’ staff tours event. We entered the Operations Excellence building to be warmly welcomed by Sam Court, who ushered us into a room which had been prepared with all manner of props and mood lighting (no less!).

We were firstly shown the latest developments in 3D headset technology. Sam demonstrated how these advancements were being used in industry, from detecting minute cracks in jet engines to assisting medical operations. By wearing the 3D headset we experienced how a client could view their components, getting fully immersed in the image and pulling it apart in a way that would be impossible in real-time. We learned that the OpEx team were partnering with companies to determine soon-to-be obsolete components in engineering and IT. By using 3D models, businesses could make better decisions on how to update their manufacturing output, with minimum wastage and cost.  As a fun aside, Sam had set up images in the corners of the room for us to discover (such as a puppy) which demonstrated how a whole room could become part of the 3D tableau. 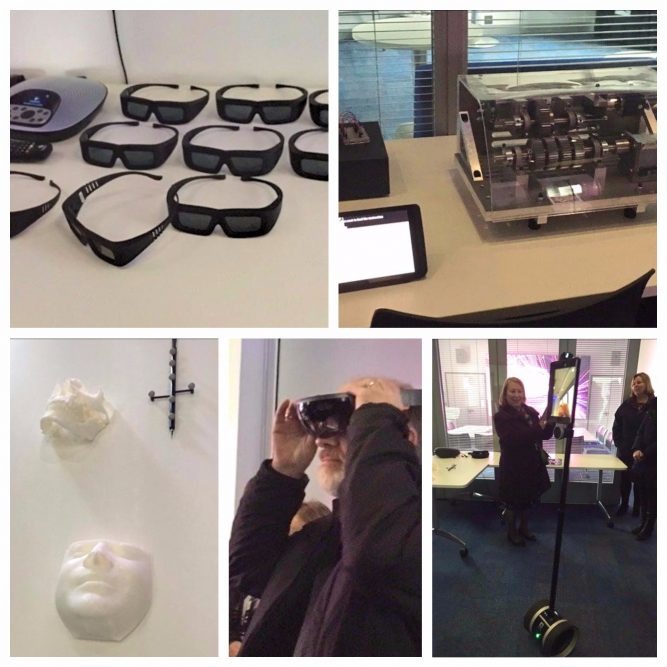 Next we were shown how the medical profession had benefited from 3D technology by practising otherwise potentially dangerous operations on a 3D model prior to making the ‘first cut’. MRI scans were also linked to the technology so that they could plan the best course of action for delicate procedures by virtually delving through the layers of skin, bone and muscle.

Lastly we were shown a solution to the problem of being a key speaker at an event, but not being physically present (due to distance or delay). Sam’s face and voice were visible and audible on a tablet which was mounted to a robot on a rotating wheel. This robot was operated by remote control, expertly managed by a rookie colleague to prove how easy it was! This meant that the presenter could be fully immersed in the event, moving and interacting deftly between delegates in a way that would have been impossible on 2D screen or conference call.

Personally, I found the event to be a fascinating insight into the world of 3D technology, and felt proud that Cranfield were at the cutting edge of such important developments.

Protein-free natural latex gloves – responding to the pandemic now, transforming the industry and supply chain for the future